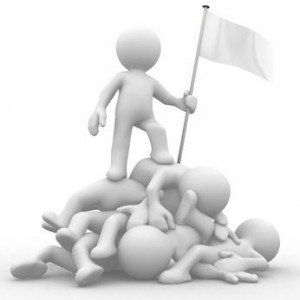 Few can claim as much knowledge of both sides of America’s polarized wealth divide as Rick Wartzman. During his 20-year career as a journalist, Wartzman delved deep into the reality of poverty for a major Wall Street Journal examination of the minimum wage and also mastered the intricacies of corporate finance as business editor of the L.A. Times. At the Times he also originated one of the paper’s only serious attempts at understanding the real economic challenges of our time, a column that the Times soon jettisoned, making clear that covering the lives of the working class — truck drivers, hotel workers, factory hands — was not a priority.

Since 2007 Wartzman has served as executive director of the Drucker Institute, a think tank founded to perpetuate the legacy of management guru Peter Drucker and dedicated to bettering society by helping organizations to be more effective and responsible. Like Wartzman, Drucker straddled the worlds of privilege and poverty, advising corporations such as Procter & Gamble, IBM and Toyota, as well as Cesar Chavez and the United Farm Workers. Wartzman sat down recently with Frying Pan News to discuss where business and labor have gone wrong, and what can be done about it.

Frying Pan News: You wrote extensively about poverty in America — what did you learn?

Rick Wartzman: In this divided America, we really have worlds that don’t connect. The working poor, and the working just-getting-by, and the working lower-middle-class have all seen their wages, along with those of the middle class, stagnate for the last decade or more. The One Percent or Five Percent don’ t have a clue what it’s like to live like that — how hard those people work, what a struggle it is, how it manifests in the tradeoffs people have to make, the kinds of pathologies that are created in families that live under those kinds of pressures, which in turn makes it so hard to educate children right. The ripples are endless.

If you are lucky enough to be a knowledge worker and well educated, you are going to do fine in this economy, but if you don’t have a degree, you’re screwed. One of the biggest things I‘ve taken away driving around the ports and meeting with hotel workers is that people don’t understand what it’s like to do these jobs. If they did, I think they would be more sympathetic and more outraged and might be calling for greater change politically and socially.

FPN: What do you think of the Occupy movement?

RW: It’s clearly a reaction to all those things. People are frustrated because they’ve been stuck. It’s hard to work your tail off and have your pay not even keep pace with inflation. We’re now in a situation where our children very likely won’t do as well as we did. As unformed in its specific goals as it was, Occupy was a spark, a shout about that.

If I put my Drucker hat on it’s a reaction to something Peter Drucker would have recognized very clearly. Drucker’s core philosophy is that we are a society of big organizations — corporations, healthcare systems, government agencies, unions, and so on. When those organizations are effective and responsible, society functions well. When they are not, society has problems. And that’s a lot of what we’ve been seeing — most clearly through the financial crisis, but even over a longer period. If you asked the Occupy people, they wouldn’t say they want better management, but I would say they really do; it’s a call for more effective and responsible management of our institutions.

FPN: What responsibility does the business community bear for the breakdown in how society runs?

RW: A lot. One of the worst movements this country has seen over the last 40 years is the maximize-shareholder-value movement. There used to be a better approach when companies thought a lot more about all their stakeholders — employees, customers, the communities they did business in. There were obviously a lot of tensions, including fierce battles between labor and management, but there was a better balance than simply trying to put shareholders first all the time. Unfortunately, when maximizing shareholder value is the priority, it can lead to lots of bad behaviors — messing around with the numbers, selling toxic mortgages, damaging the environment.

FPN: What could business leaders do to address L.A.’s declining middle class and huge underclass?

RW: You want businesses that really care — and not just write hollow mission statements — about all these constituencies. A great example is Costco. Former CEO and co-founder Jim Sinegal’s philosophy has always been that you do right by your people by offering decent wages and benefits and paths for advancement, you take care of your customers and you have good relations with your suppliers. The stock price takes care of itself.

FPN: Why is Costco the exception?

RW: There is tremendous pressure from Wall Street to maximize returns for shareholders. The country has gotten over-financialized. Before the collapse of 2008 the financial services industry accounted for 40 percent of corporate profits. That’s out of whack. As Drucker used to say, “Analysts think that companies make money. Companies make shoes.”

If every company did what Costco does we’d be a lot better off. CEOs that have a true stakeholder mentality, as opposed to a shareholder-value mentality, by and large are not going to make 300 or 400 times what their average worker makes. Yet that huge disparity is what we now face. The ideal is a 20- or 25-to-1 ratio, which is still a hell of a lot of money for the guy at the top.

What historically has allowed all boats to rise is that when productivity went up, gains were spread across the entire income spectrum. That’s stopped; gains are now going only to the people at the top. Is it a coincidence that the people at the top are also the ones calling for maximizing shareholder value? I don’t think so.

Gompers and Cato: A Dialogue