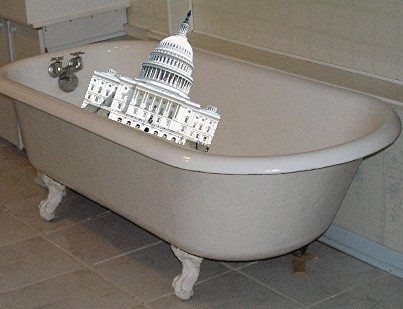 It was Grover Norquist who famously said he wanted to shrink government to a size where he could drown it in a bathtub. Norquist’s Paulist allies in Congress (Ron Paul, Rand Paul, Paul Ryan) show no interest in stopping there, however, and probably would go after the bathtub next – or at least indoor plumbing. Of course, things like indoor plumbing and electricity are some of the creature comforts that were brought to millions of Americans by their federal government decades ago, because private enterprise saw no immediate profit in spreading such “luxury” to everyone. Without New Deal programs such as the Rural Electrification Administration, Tennessee Valley Authority and Farm Security Administration, many of us might still be sitting in the dark, as well as sitting – well, elsewhere, if you get my drift.

It’s become bad manners today, however, for government to remind us of the things it does for Americans – or rather, what Americans do for themselves through their government. Instead, in the blogosphere and on places like Fox News we are treated to an endless propaganda loop in which civil servants are denounced as free-spending bureaucrats, organized society is dismissed as “big government” and both are equated with Big Brother. In last Sunday’s New York Times, columnist Timothy Egan pointed out how, in Mitt Romney’s views on shrinking the federal government, “public servants are dishonorable, and maybe even less American.”

But where do the Norquists and the Pauls go, once they’ve drowned government and sold the bathtub for copper scrap? Probably to very lucrative sinecures on foundation boards, paid for by the only people to benefit from their efforts – Big Business. These Boer conservatives are not actually devotees to miniaturization, per se – their interest in molecular government shouldn’t be mistaken as a sign they are against everything big. Far from it. They are very much for Big Pharma, Big Media, Big Tobacco, et al., and for massive profits.

Such free-market Salafists only abhor the “big” in government when it stands in the way of corporations and banks doing as they please. Which is why Norquist and Co.have demonized another “big” bogeyman – organized labor.

Unions, as anyone who has read this blog knows, are fighting an existential defensive battle against unrelenting assaults launched by Norquist’s friends at Fox News and corporate-funded front groups. Norquist was behind Proposition 226 (so was whack-job billionaire Richard Mellon Scaife), the unsuccessful 1998 ballot initiative that sought to weaken California’s unions under the banner of “campaign reform.” Norquist also played Generalissimo in then-Governor ArnoldSchwarzenegger’s failed attempt to privatize the CalPERS pension fund in 2005. This November California voters will be confronted with the cynically christened “Paycheck Protection Initiative,” whose only long-range goal is to cut paychecks by gutting the political influence of the state’s unions. Norquist may not be directly behind the measure, but his fingerprints are all over it.

Last week columnist Harold Meyerson, sounding uncharacteristically glum about labor’s future, noted too the danger in its decline for everyone, not just workers:

Is that where we want to go? Is Big Business really willing to push the country into the class warfare of the late 19th and early 20th centuries?

When our politicians let us down, we draw inspiration where we have always found it: from the  movies. And, when contemplating the short-sighted motives of the men and movements that are trying to shrink and drown government and unions, there’s no better place to turn than the Chinatown scene in which the private eye asks an old, rapacious millionaire why, at his advanced age, he is involved in a complex electoral scheme designed to swindle Los Angeles out of water it is stealing from farmers.

“How much better can you eat?” asks the detective, played by Jack Nicholson. “What can you buy that you can’t already afford?”

Norquist and others like him pretend that it is the future that they’re working for and dream about at night. But it is really the past – the dark, cobblestoned jungle of a lawless industrialAmerica– that they are taking all of us back to.

A Tale of Two Cities' Trash