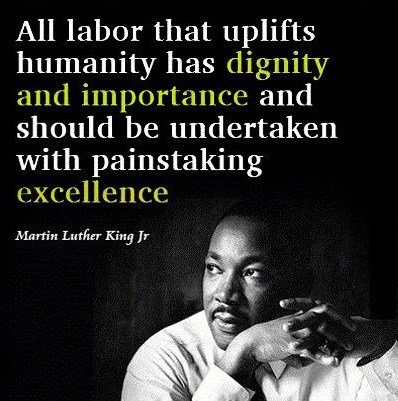 Last year, as we remembered the life and legacy of Reverend Dr. Martin Luther King, Jr., we focused much of our attention on the 50th anniversary of the March on Washington for Jobs and Freedom. We reflected on the historical words that followed, “I have a dream” and reaffirmed our commitment to keeping the dream alive.

We measured our progress through victories such as the end of Jim Crow segregation, the passage of the Civil Rights and Voting Rights Acts, and the election of our first African American President. We also talked about where we need to devote our efforts for the dream to become a reality.

With that, one year later we are reminded of the inequalities that still exist and the call to action we must all answer:

As the members of United Long Term Care Workers honor Dr. King this year, we dedicate this moment of tribute to the championing of one of Dr. King’s most precious causes: Dignity. It was, after all, Dr. King, who said, “All labor that uplifts humanity has dignity and importance and should be undertaken with painstaking excellence.”

Recognizing that there is no dignity in inequality, our union launched Dignity California – a campaign dedicated to the fight to bring dignity to the lives of all who call California home! A fight that ensures that jobs aren’t just jobs, but good jobs that place the American Dream within reach; creates a pathway to citizenship for aspiring Americans; delivers affordable quality healthcare to all; gives workers a voice in the workplace; creates income equality; and gives our children and families the tools they need to succeed.

We will forever be grateful for the foundation Dr. King set before us and the inspiration we continue to draw from his actions. It is through his vision and dream that we proudly carry on the work necessary to achieve the just society he spoke of – one in which dignity prevails.