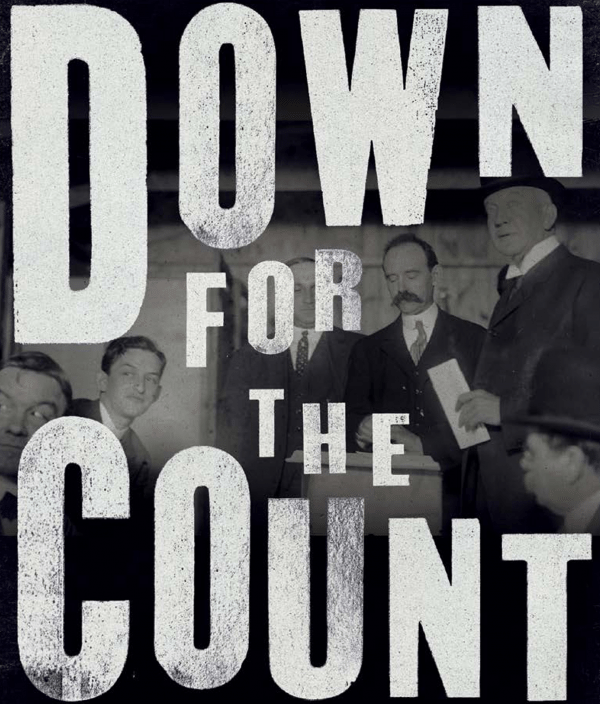 Most of us ignore the electoral process except when we’re voting. We stand in line and punch the card, carefully sweeping off the chads before we put it in the box. And leave the polls believing in the validity of our vote.

Then along comes year 2000 and we see a national election in which the guy who got the fewer votes wins. For Gore voters, it was like someone had stolen the new millennium.

But hey, it only happened once, right? After Bush there was Obama, and that made things all right. The system worked again, didn’t it? Maybe Bush-Gore was just a millennial glitch. It couldn’t happen again. Right?

If that’s the way you feel, you have to read Andrew Gumbel’s “Down for the Count,” an unstinting account of U.S. election knavery back to the Founding Fathers. Actually, while Gumbel’s Early American History 101 entertains with lurid details of skullduggery among the Founders and their successors, it’s the book’s weakest portion. The author, for instance, assails the Constitution itself as “blunting the revolutionary spirit that had informed the rising against the British,’’ since it didn’t establish universal suffrage and abolish slavery. Of course the Constitution didn’t do that, there being no widespread support throughout the original states for either innovation. It took over 80 years of shifting opinion and struggle—including the Civil War—to include both as amendments. This is the Constitution’s true value—its ability to change for the better.

Gumbel is far more convincing on his central theme—fair and honest voting practices in America have been at best an orphan stepchild of the American political process. The electoral foot soldiers tend to be unschooled volunteers and minor, underpaid officials, beholden to the elected. Accordingly, the occasional crooked election, particularly in big cities, has long been a part of our heritage. The higher state election officials are usually partisan, whether elected (like the states’ individual Secretaries of State) or appointed. They are potentially motivated to make sure the opposing party has as hard a time as possible getting votes. Whether by spoilage or loss of ballots, breakdown of machines, dubious vote counts, early closure of polls, the list goes on: the party in power often has the upper hand at election time. California’s partial solution has been non-partisan local elections. But there seems no way to do this statewide, let alone nationally. Nonetheless, offices do change hands, and nowadays truly egregious election abuse seems to remain the exception rather than the rule.

The new century, however, has brought new threats to the precarious election process. The first is the United States Supreme Court’s 2010 “Citizens United” decision that effectively prohibits limits on campaign spending. While its effect was muted the 2012 presidential race, it was overwhelming in state elections, as Gumbel demonstrates: as long as two-thirds of America’s wealthy remain conservative, they’re going to pay to help elect Republicans to legislatures, even in Democratic-aligned states like Michigan and West Virginia. And of course Republican legislatures gerrymander districts to elect Republican congresspeople. Gumbel has all the details.

Hand in hand with “Citizens” has been the Republican state-by-state drive to keep as many minority, elderly and youthful voters as possible from the polls by jacking up voter ID qualifications and making registering to vote far more difficult. Again, our Supreme Court came running to the rescue of unfair voter qualifications with its 2013 decision in Shelby County v. Holder.The case was effectively Shelby County v. the Voting Rights Act, as it gutted the 1965 law,leading to a massive attack on minority voting rights from North Carolina to Texas to Arizona that is still being fought in the courts: Gumbel calls this assault “The new Jim Crow.”

After his hefty 220-page brief against the U.S. electoral system, Gumbel’s four pages of suggested remedies seem a bit sketchy. Obviously, he’d like legislative or legal relief from the “Citizens” and “VRA” decisions. He also suggests weekend elections, abolition of the Electoral College and a national election agency that would have the power to right electoral wrongs. These are all good ideas, but to be effective, they would probably have to become constitutional amendments.

That’s what the Constitution is for, Mr. Gumbel.

Marc Haefele is a regular commentator on KPCC. He has written for the New York Times, the Los Angeles Times and the Philadelphia Inquirer. In the 1970s, he was Clerk of the Board of Elections of Pahaquarry, New Jersey.[/vc_column_text][/vc_column][/vc_row]

Can California CFO Betty Yee Get the Golden State to Think Big on Tax Reform?