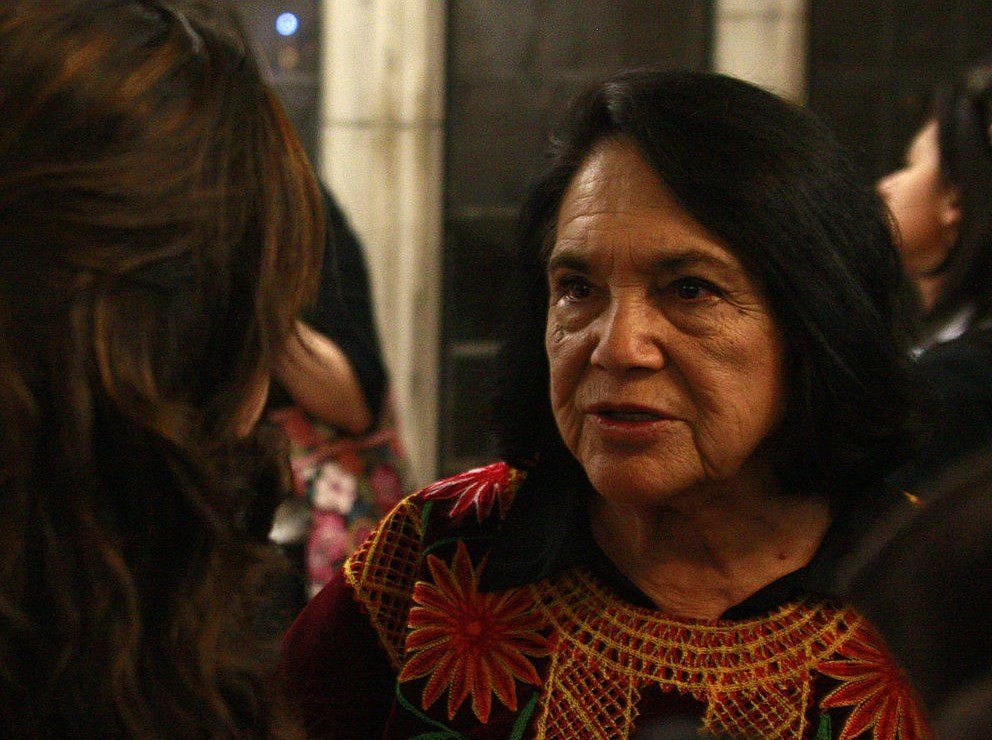 Three weeks ago Students Matter, the nonprofit group behind the Vergara v. California lawsuit, began prominently touting United Farm Workers co-founder Dolores Huerta’s support for that suit on its website. The subhead of the group’s press release boldly claimed the labor icon was one of the “Voices of Vergara,” a collection of pro-lawsuit testimonials that appear on Students Matter’s website and on YouTube.  The release stated that “the longtime California labor leader and civil rights activist” endorses the lawsuit and quotes her as saying, “I think it’s awesome that the Vergara lawsuit was filed. There is no excuse why we can’t have equality in education. I think we have the resources to do it, we’ve just got to have the will.”

There was only one problem: The press release’s statement wasn’t true.

On February 3 Huerta sent a strongly worded “cease and desist” letter to Students Matter’s public relations firm, RALLY, demanding that the group “cease the use of my name and image” on the nonprofit’s website. By the end of last week the websites for RALLY and Students Matter had removed references to Huerta’s supposed support for the lawsuit, which would effectively end tenure and other employment rights currently enjoyed by California’s public school teachers. (In June, 2014 a Los Angeles Superior Court judge ruled in Students Matter’s favor, a decision that immediately drew a legal appeal from the defendants.)

Huerta expressed shock when she was told there was a Students Matter press release on its website claiming she had endorsed the lawsuit.

“I never said that,” she said regarding the quote in the release. Capital & Main reached out to both RALLY and Students Matter, an organization founded by Silicon Valley entrepreneur David Welch, but did not receive responses.

“This just goes to show you the extremes that the backers of this case will go to push their agenda,” said Claudia Briggs, a spokesperson for the California Teachers Association (CTA), one of Vergara‘s defendants. Last Thursday, a three-judge panel in California’s 2nd District Court of Appeal in Los Angeles began hearing arguments to overturn the 2014 ruling. Filing the appeal are the state’s two largest teacher unions, CTA and the California Federation of Teachers, Governor Jerry Brown and state Superintendent of Public Instruction Tom Torlakson. (Disclosure: The two unions are financial supporters of Capital & Main.)

Huerta joined educators and community members for a news conference that Thursday morning and spoke of her opposition to the lawsuit, which she says is not focused on improving the educational system in the state. The only way to do that, she said, is to provide more support for teachers, adding that they deserve better salaries, fewer students in their classrooms and the support of their principals.

The founder of the Dolores Huerta Foundation also talked about the importance of teachers having a strong voice for students and described how Students Matter misrepresented details of the case in an attempt to get her support.

In a CTA/CFT press release, she said: “I strongly believe in providing all children with equal access to a quality public education, and that starts with having educators who have the professional rights to stand up and speak out for the students in their classrooms. Students Matter is attempting to deceive the courts and public opinion in the same way they attempted to deceive me and it’s time to tell the truth.” Huerta’s cease-and-desist letter demanded that RALLY “cease the use of my name and image on your website, studentsmatter.org and all collateral digital platforms and materials.”

In the letter, she added, “I am extremely disheartened and disappointed in the way you misrepresented the facts in order to get me to align with your organization and in particular the Vergara v. State of California lawsuit. I am now very much aware of your agenda and it is in direct conflict with my beliefs that every child deserves a quality teacher who understands our students’ issues while maintaining their job protections.”

“Having carefully reviewed the facts, I do NOT support the Vergara v. State of California lawsuit,” she wrote. “All my life I have worked to fight discrimination, uphold the rights of workers and improve social and economic conditions for our students and their families. I am not going to stop now by aligning myself with an organization that blatantly misrepresents the facts and pushes an agenda to strip workers of their rights for the financial gain of its backers.”

In a phone interview, Huerta described how she came to meet a RALLY representative while she was organizing parents in Kern County. Huerta, whose foundation has worked on education issues for the last five years in the Central Valley, participated in a community roundtable discussion where the representative asked that she express her thoughts on education in a video that was later posted to the Students Matter website. Huerta repeated to Capital & Main that her intentions were misrepresented by RALLY and Students Matter.

Charter Schools Have a “Discipline” Problem