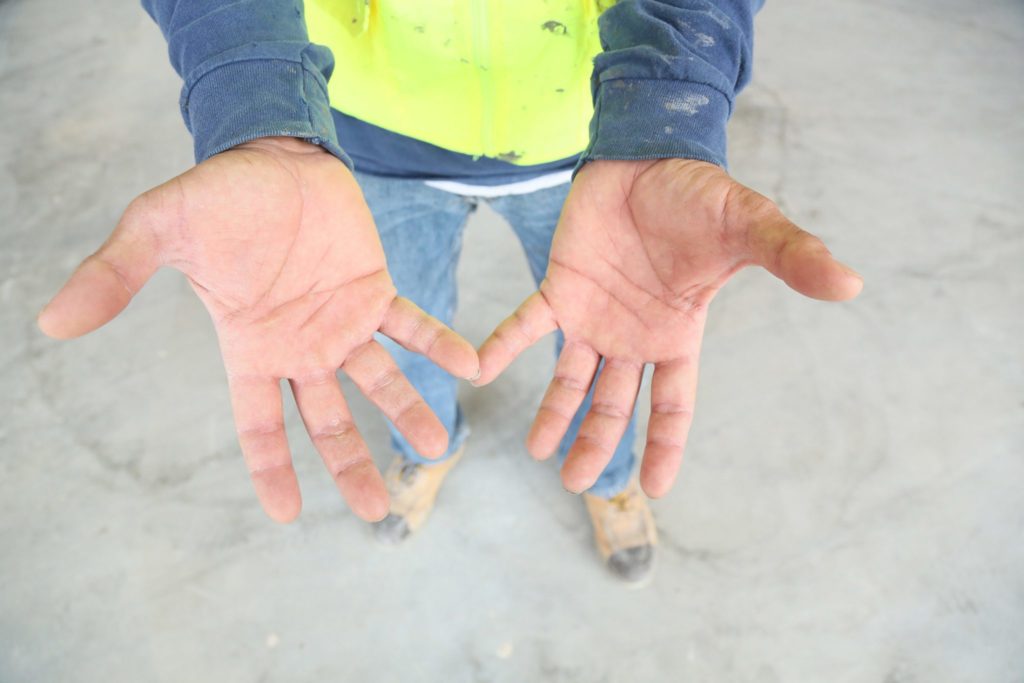 All photos by Hector Cruz Sandoval

Slated to open on June 23, the tower of Los Angeles’ Wilshire Grand Center rises 1,100 feet into the air, making it the tallest building west of the Mississippi. But also standing tall are the 2,000 men and women who have spent the last 40 months building the 73-story structure on the corner of downtown’s Wilshire Boulevard and Figueroa Street. For over three years, filmmaker/journalist Kelly Candaele has been documenting the construction of the Grand, as its shining silver tower rose up to pierce the City of Angels’ bright blue skies. Visiting the site 150 times, Candaele had to overcome his fear of heights and work around a whole lot of noise. But he was on a mission to capture the toil and heart that goes into constructing our buildings, which sometimes seem to appear on our skylines as if by magic. The filmmaker also visited some of the homes and families of the Grand’s diverse group of workers, who fittingly reflect the multicultural city around and below them. The result is the documentary Heads, Hands & Hearts, a 76-minute tribute to work and workers, which premieres June 17 at L.A. Live’s Regal theater.

Candaele has made over 40 films and videos, reported stories for the Los Angeles Times, the New York Times, and the Nation, and also wrote the story about his mother that became the basis for the film A League of Our Own. Candaele sat down with Capital & Main to talk about his work and that of the millions of unsung heroes building our future.

Capital & Main: What motivated you to make this film?

Kelly Candaele: My father was a union electrician, so I kind of grew up around construction. I’ve done a lot of thinking about what these men and women do and I guess the first impulse was just to honor that work. I read an essay by John Densmore, the drummer for the Doors, in the L.A. Times a couple of days ago and he was talking about the physical toll being a drummer takes on your body. And I always thought [that’s how it is] with construction workers, they are similar to athletes in that way. They know they are sacrificing their bodies to make a living. They do it over a 10, 20-year period to try and get a pension that is livable, but a lot of them don’t make it. The first impulse was to honor their work and to show people what they actually do. You watch these buildings go up in the distance, and it’s kind of a mysterious process, but it’s all a product of human labor.

So I thought if I could get access, to just explore what the workers’ feelings were about it, and to go to their homes to hear their stories, it would be fascinating. A lot of documentarians start with visuals, but very often I start with an idea. I’m kind of a bookish person. I started reading about the hand and evolutionary biology, the relationship between the hand and the brain, the evolution of our cognitive development. With the trades, I became fascinated by how knowledge is passed along, and the societal question of how we pass along knowledge from one person to another.

In the film, both a father and son are working at the site, and apprentices learn from more seasoned laborers.

You see it more in the trades than in other places, where people are more left to their own devices. With the trades, it is very structured. It’s a program, it’s five years. It’s fascinating because it’s tacit knowledge, knowledge that isn’t written, but is communicated in a more subtle way in the process of doing something. That’s a very difficult knowledge to acquire other than just doing it.

This shared experience of building this building seems to have forged some real affection and even love between the workers.

I think so. There are also many sources of potential conflict that exist on a construction site because it’s very chaotic even though it’s highly organized — there is material everywhere, people are going everywhere. I mean if you look at a time lapse, it’s like ants moving in all these different directions. I didn’t think about this until later, but I sort of became fascinated that it’s one of these places in society but sort of set off from society. Not everybody can go in there — and when you do go in there, there are very, very explicit rules. There is kind of a morality imposed upon the site.

How did you get the workers to trust you?

Some people just don’t like to be on camera. But I think if you are open with people and they understand very quickly that you are not there to humiliate them — because we exist in a culture now where you can go very far by humiliating people — then it becomes very clear they can trust you.

The one thing that seemed to really be evident is that these workers are very proud of their work.

You do get that sense. There is no need to romanticize it. Or try to evade the fact that it is very hard on the body and that it is a tremendous sacrifice. I tend to project some of my own utopian yearnings onto a project like this, a building and construction site is a place of repair and of creativity and solidarity between people. But there is no reason to deny the difficulty of it. Did you see that happen to your dad?

I think so. It was not easy. He was doing a lot of housing, when housing was union. Now it’s not. I mean, crawling under houses and pulling wire. We came from a blue-collar family, [with] of all of its meanings. Working with your hands. Construction is hit and miss. Sometimes you are working, sometimes you’re not. Sometimes its economically precarious. The culture of someone who is union is very explicit. The primary thing was this idea of solidarity with your fellow workers. He was very direct about being against racism. This was back in the ‘60s. You treat people with respect, no matter what color or race or background, and I have to think that was part of the union message.

Which brings to mind the strong bond between the Asian apprentice in the film who has become best friends with his Latino mentor.

That was a very profound moment. Clearly, he was from another country, Vietnam, he came here and needed some help, needed someone to say, “I can help you, I can teach you, I am willing to teach you,” and it went beyond just the workplace, it went into a deeper friendship. To me that encapsulates a great message. [That was obviously not] pervasive in all the relationships…but to me that was a very moving testament to the kinds of relationships that can be established.

How much does the union have a part in that? You mentioned earlier the idea of passing along tacit knowledge to others, but it also seems to give them solidarity and a voice.

Construction can be one of the most exploitative industries in the country. Some people don’t go to college or they may not finish college — what are these people going to do? It’s a really profound thing these trades do, that is overlooked very often — to transform people’s lives. In fact, Sefi, the guy who is also an artist who paints, he’s an apprentice. And being in the union is still kind of new and mysterious to him.

He said to me, “Kelly, I got in this argument the other day with someone and I feel bad about it. I was at a restaurant and a guy came and said ‘Unions, you know, you guys make too much money.’ I kind of got mad, and I started to get mad.” But he felt bad about getting mad. He said, “Maybe I’m just finding my voice.”

Who did you make this film for?
The main audience is the workers. They are the stars of the film. Some may not even be in it but their work is. I’d like to have a broader audience, but…the main thing is I hope that when people watch it they go, “Oh, that’s how these buildings get done. It’s people with families and children.”

Someone once said something to the effect of filmmakers don’t pick their films, films pick them.

That’s probably true. I think every filmmaker imposes their own emotional state or capacities onto what they are doing and I think it’s probably true in this case. I’ve spoken about some of the melancholy aspects of it because it made me think of the temporal nature of things — most of the workers are younger than me, the workers will last beyond me. The building will last beyond the workers. But the building will fade away too. It’s the nature of the flow of life, the cycle of life. So even though it’s like a triumph in a really elegant and majestic building, I brought my own emotional gauge to it.

Ultimately, do you think that maybe the reason you made this film was to pay tribute to your father?

I think that that is true. Especially since I think the one that I made about my mom [A League of Their Own] became a big Hollywood production. There was definitely something to that when I put in the endnote: “Dedicated to My Father.” The film, in a way, is my attempt to honor his life and honor his work.