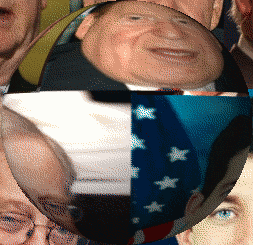 Out of 300 million Americans, a few thousand wield disproportionate economic and political influence because of their positions at the pinnacle of America’s corporate and media establishments or their roles as political allies (or puppets) of the corporate ruling class. C. Wright Mills described this group in his 1956 book, The Power Elite; G. William Domhoff has updated this analysis in his book, Who Rules America? (now in its seventh edition), and Jacob Hacker and Paul Pierson have described how the power elite wields its influence in Winner-Take-All Politics.

Many of them have overlapping memberships on the boards of the largest corporations, business lobby groups, universities and think tanks, foundations and media conglomerates. They are not part of a conspiracy. They do not meet secretly to plot America’s future. And they do disagree with each other on some issues, particularly same-sex marriage, abortion and gun control. Some are corporate conservatives and moderates; some are right-wing reactionaries and racists; others are lunatic libertarians.

But they agree on the essential concerns about the economy. The top Wall Street and Walmart CEOs, the media monopolists and their talk-show agitators, the billionaire benefactors and the business lobbyists share an antipathy toward unions, progressive taxes and government regulations that protect consumers, workers, and the environment. They fund think tanks and hire college professors to promote their views and to cry wolf about government rules — denying the reality of global warming, warning that raising the minimum wage or strengthening regulations on banks will “kill jobs,” and attacking Obamacare (and Obama) as “socialist.” They work closely with right-wing, conservative, and moderate politicians to carry out their agenda. They act on behalf of big business and the super-rich, but to translate their ideas into public policy they have to persuade voters that their agenda benefits middle class Americans — a task that is getting harder and harder to do.

As in all eras of American history, there are a handful of members of America’s upper class who are traitors to their class. They sympathize with and even fund progressive causes, campaigns and candidates. They side with the growing movement that is emerging to challenge the domination of America’s power elite.

Like Yertle the Turtle, these 20 men sit atop an unstable foundation of widening inequality and social injustice. And like Mack, the turtle at the bottom, there are more and more Americans angered and frustrated by the status quo. Polls show that most Americans prefer “responsible capitalism” over “no rules” capitalism.

If history offers any lessons, it is that these men — and the interests and ideas they represent — are not invincible. Martin Luther King Jr. said, “the arc of the moral universe is long, but it bends toward justice.” But it takes movements and activists to bend it.

A Dancer Speaks Out for Organizing

A Census of Poverty