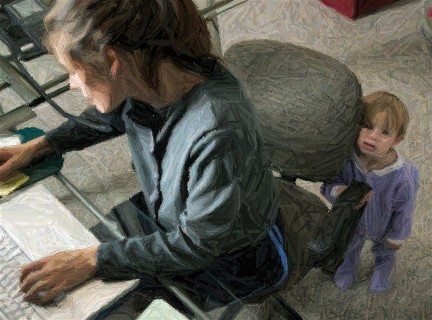 The U.S. is one of only three nations surveyed that does not have paid maternity leave written into its national labor laws.

The symptoms began only four days into my month-long paternity leave. First it was a vague craving, and before long it had crystallized into a very specific need: I just had to find out what was happening back at  the office.

Yes, the miraculous newborn in the other room should have offered more than enough fulfillment. But I was jonesing for something not even she could provide.

The problem went way beyond my Crackberry. Truth is, I felt compelled to check work e-mail and even send more than a few to affirm that, beyond my new identity as a dad, I was still relevant — i.e., a loyal, productive employee.

You might be tempted to view my behavior as a bizarre idiosyncrasy (some truth there), or as a natural response to the conditions of my employment — decent wages, extremely generous benefits, flexible schedule, a congenial work environment.

But the fact is, American workers have long rewarded their employers with rising productivity and abundant loyalty regardless of wages and benefits. To see just how perverse the relationship is, check out this painfully amusing infographic, and the less entertaining study by the Economic Policy Institute.

Most of us are sadly familiar with the stats on wage stagnation and the erosion of health care benefits. Less attention is paid to parental leave, but the reality is even more depressing. Out of 190 countries surveyed in a recent Human Rights Watch study, the U.S. is one of only three that does not have paid maternity leave written into its national labor laws.

That is not a typo — the U.S. is part of a lonely trio of nations that has not recognized the right to paid parental leave. In case you’re wondering, we’re keeping company with Swaziland and Papua New Guinea in the elite category of refusing to guarantee that women can take paid time off to care for their babies.

By comparison, the European Union guarantees 18 weeks of paid maternity leave and conservative British prime minister David Cameron has been pushing for an expansion of benefits in his country. Even Afghanistan — that place we’re trying to make safe for civilized American-style democracy — provides 90 days of parental leave at 100 percent pay. Ouch.

The Human Rights Watch report goes beyond the usual numbers and documents the real-life impacts of our outlier approach to families. Here’s a sobering snapshot:

“Parents said that having scarce or no paid leave contributed to delaying babies’ immunizations, postpartum depression and other health problems, and caused mothers to give up breastfeeding early. Many who took unpaid leave went into debt and some were forced to seek public assistance. Some women said employer bias against working mothers derailed their careers. Same-sex parents were often denied even unpaid leave.”

I could tell you more, but my daughter is crying in the other room — and luckily for me, I’m around to hear her.

Jobs Search: From the Streets to Congress — and Back