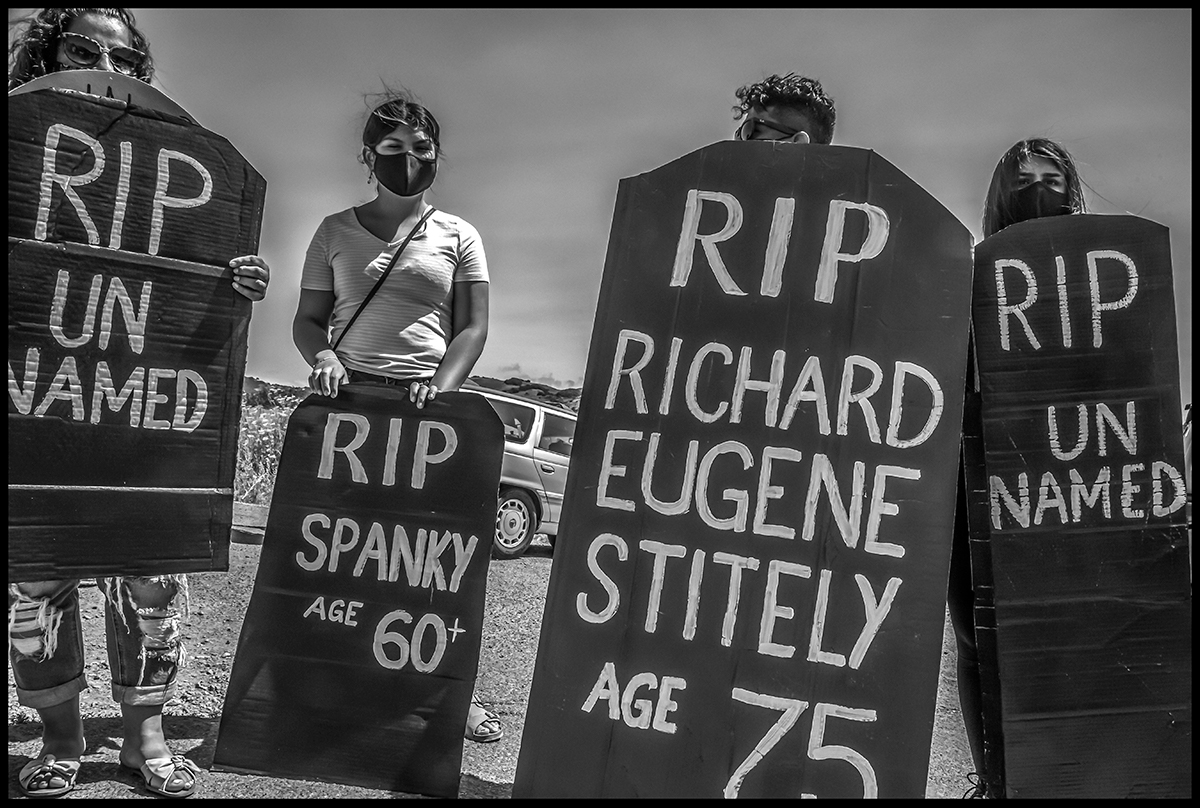 On Sunday, July 19, about a hundred people gathered at the gate of San Quentin State Prison in San Rafael to call for the release of prisoners because of the terrifying spread of COVID-19 inside the facility. On May 30, the state Department of Corrections and Rehabilitation transferred 121 prisoners from the California Institution for Men prison in Chino to San Quentin. At the time there were no known cases of the virus in San Quentin, while Chino was a recognized hot spot.

The coronavirus infection spread rapidly through San Quentin. According to the California Department of Corrections and Rehabilitation (CDCR), as of the date of the vigil there were 928 active cases and 11 prisoners had died.

Less than half of the prison’s population had been tested in the two weeks prior to the vigil. According to the CDCR, the concentration of confirmed cases at San Quentin is 625.5 per 1000. By comparison, for California (a hot spot state) as a whole, the confirmed case rate is 11.3 per 1000.

The vigil organizers include the Interfaith Movement for Human Integrity and the Stop San Quentin Outbreak Coalition, which describes itself as “a collective of formerly incarcerated folks, loved ones with direct connections to San Quentin State Prison, community organizers and currently incarcerated folks at San Quentin State Prison.” Other participants came from the Ella Baker Center for Human Rights, Re:Store Justice and the Asian Prisoner Support Committee. The speeches and placards they carried demanded that Gov. Newsom come to the prison, that the state grant large-scale releases without categorical exclusions (a 50% reduction in the prison population), and all transfers between prisons and from prisons to ICE detention centers immediately cease.

The day following the vigil a 12th prisoner, Troy Ashmus, died of the coronavirus, according to prison authorities. Five more prisoners have died in the past week, bringing the total number of deaths at San Quentin to 17. In just 25 days, from May 30 to June 24, the number of incarcerated people at San Quentin with COVID-19 went from zero to over a thousand active cases. As the numbers rise, demonstrations by desperate families have become increasingly frequent.

According to the CDCR, the state prison system now has 7,681 confirmed cases, of which 1,033 were reported in the last two weeks. Gov. Newsom has announced that he will release 8,000 prisoners by the end of August, but over the next six weeks the infected will likely exceed 10,000. With a  population of 104,725 (123% of the state prison system’s designed capacity) there isn’t adequate space for isolation.

Laura Mondragon, the wife of a prisoner, told vigil participants that Newsom had to act more quickly to prevent more deaths. “Getting sent to San Quentin shouldn’t be an automatic death sentence,” she said. “But with the virus there is a terrible risk that it will be for people like my husband.” 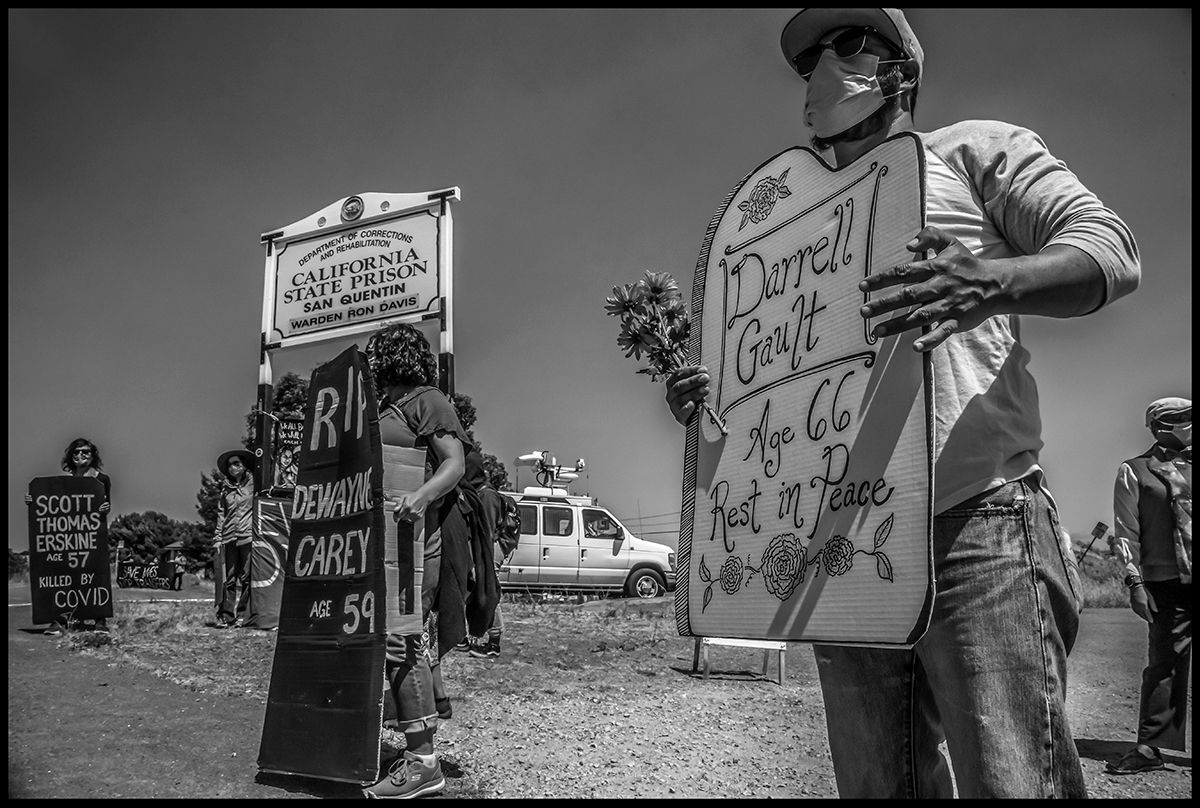 Armando Nuñez Salgado, a former prisoner, holds a sign he made remembering someone he knew inside. 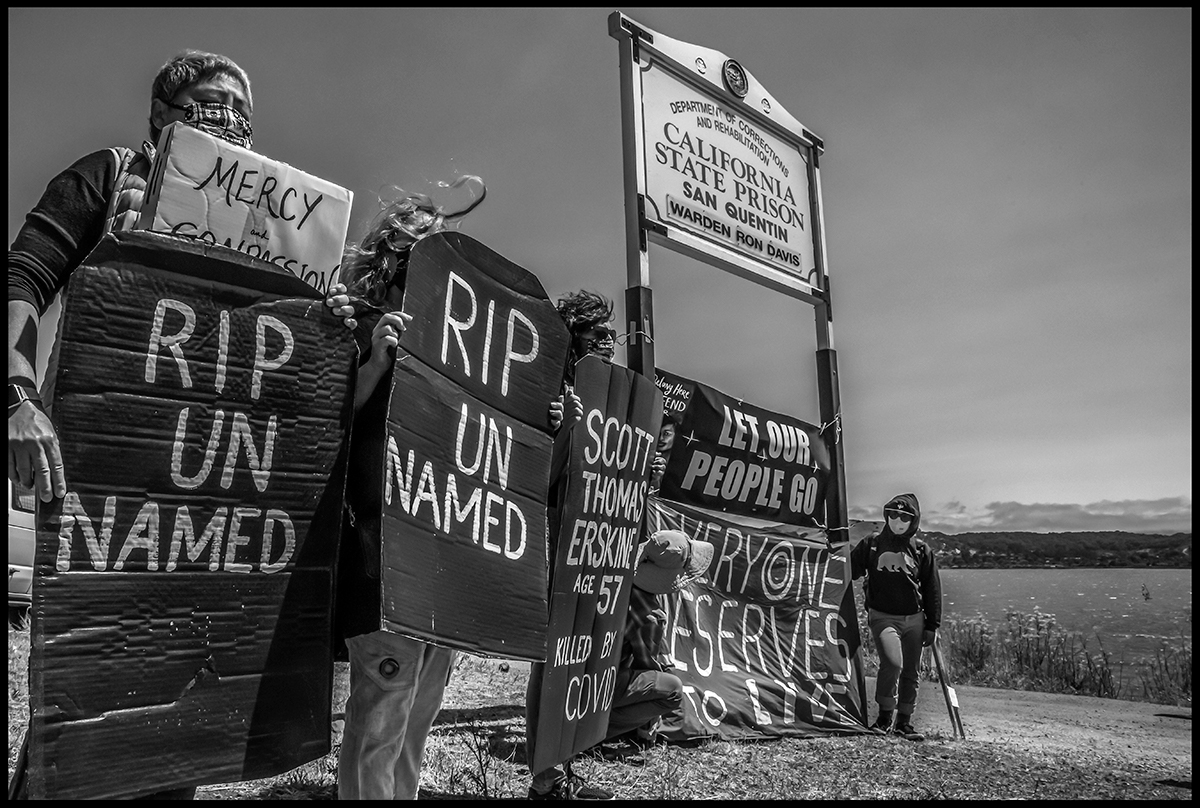 While the names of some of the San Quentin prisoners who have died are public, others are not. Participants held tombstones in their memory nevertheless. 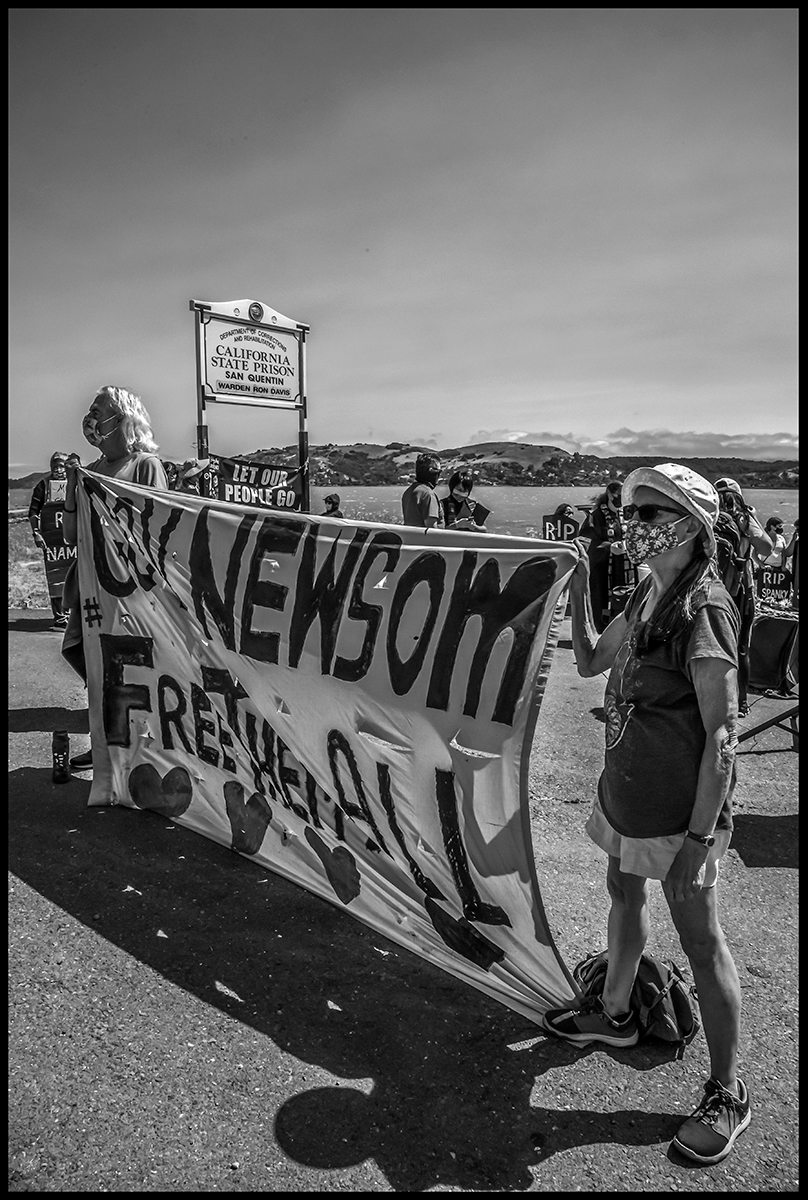 The vigil called on Gov. Gavin Newsom to release prisoners from San Quentin, and some held a banner saying, “Release Them All!” Many speakers denounced what they called a “virtual death sentence” imposed on prisoners because of the COVID contagion. 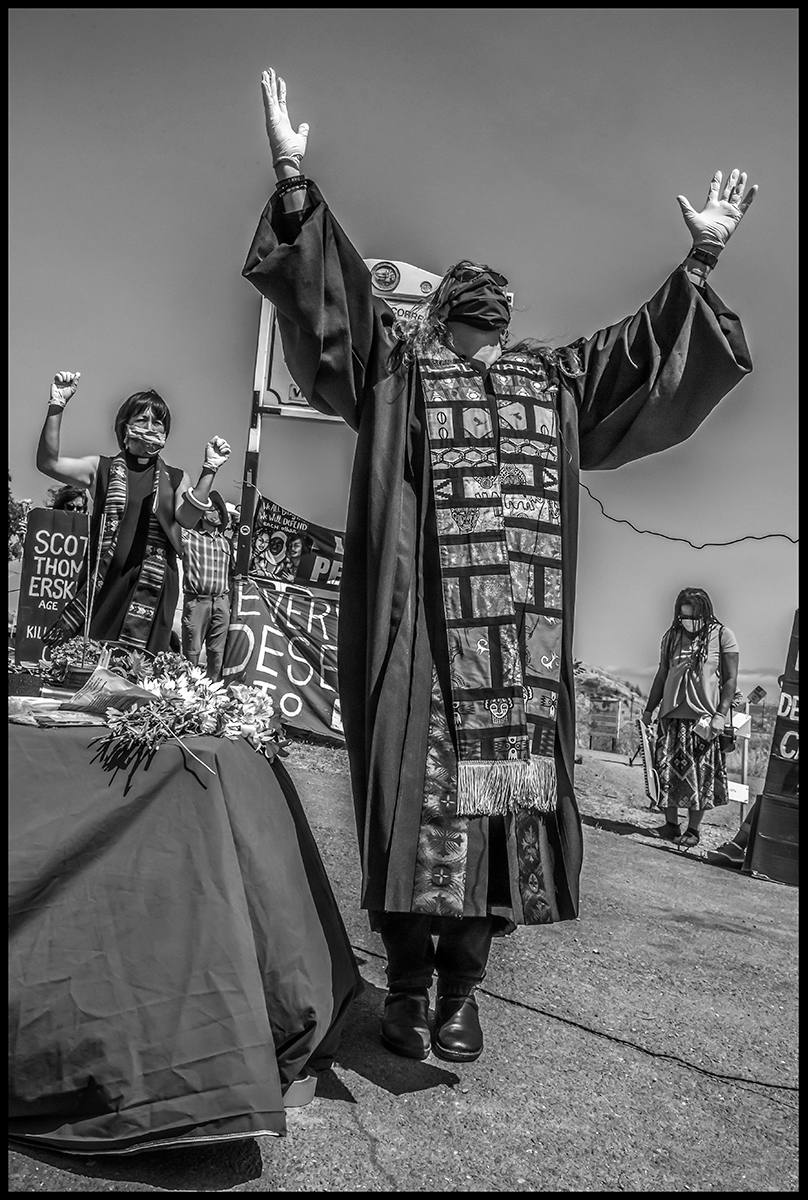 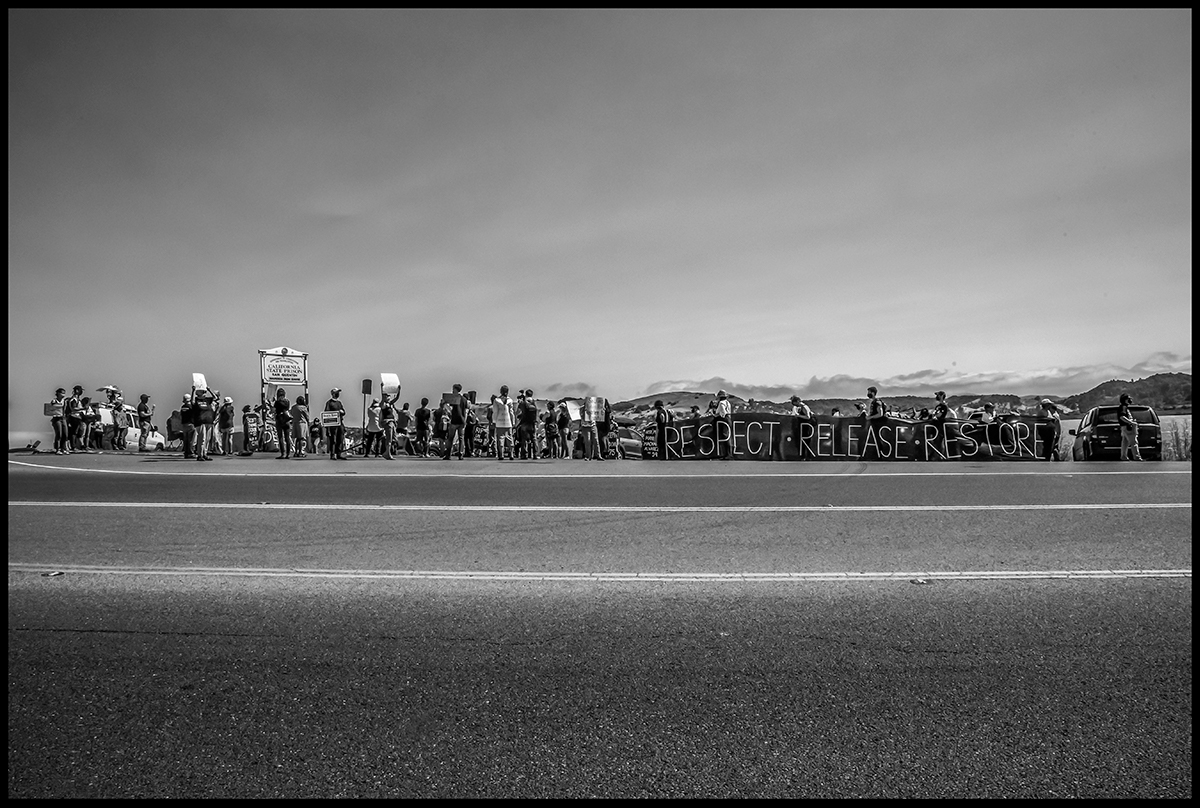 A line of participants stretches out alongside a banner on Sir Francis Drake Blvd. 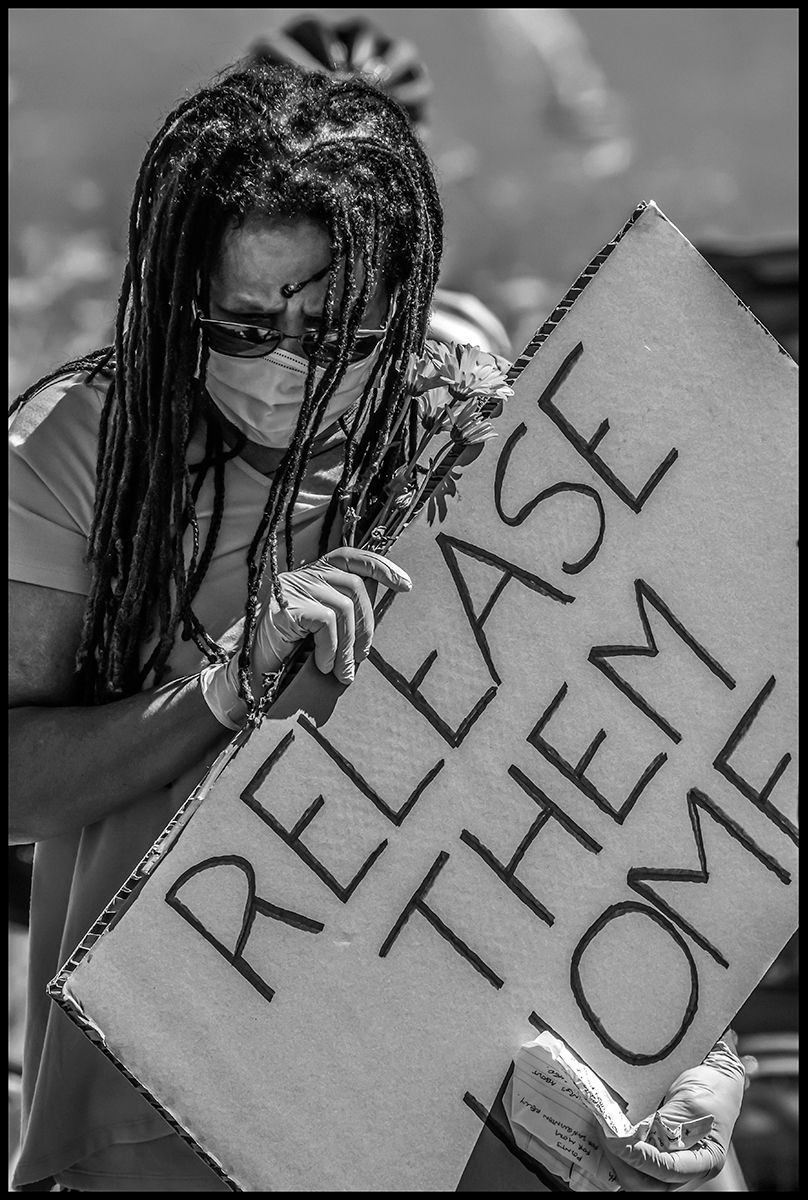 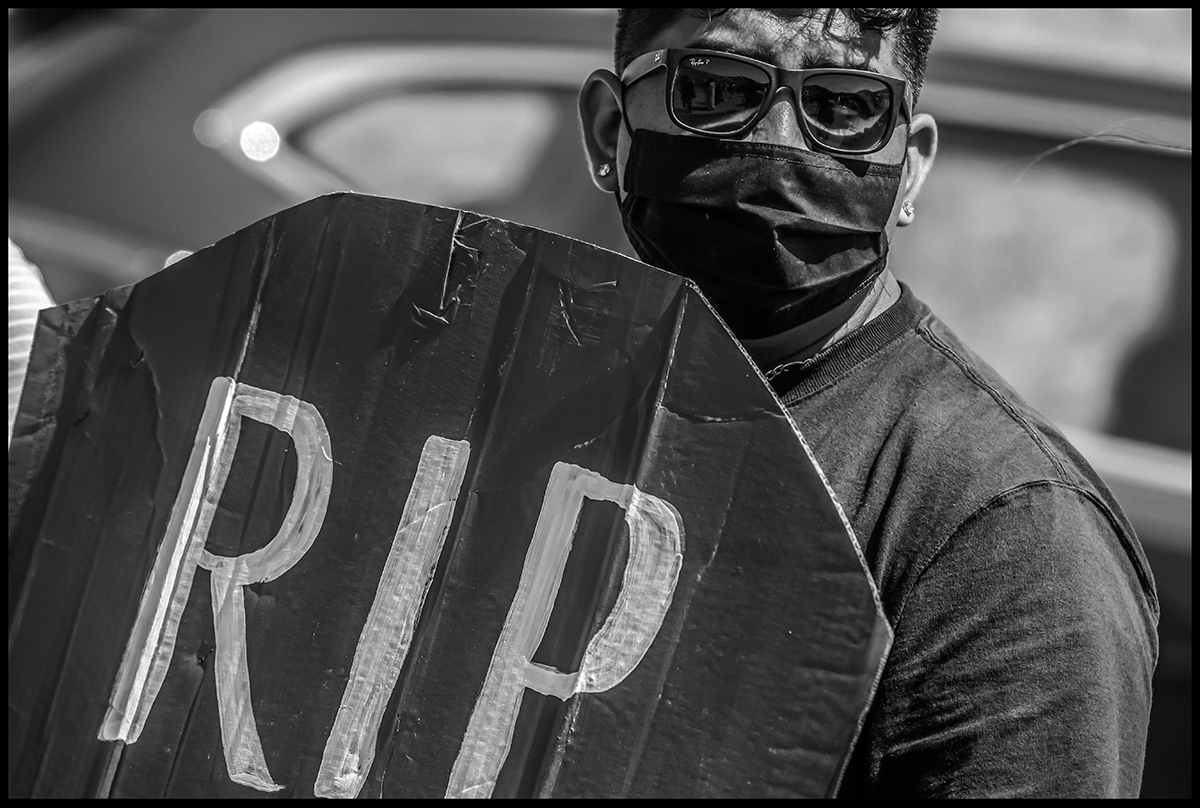 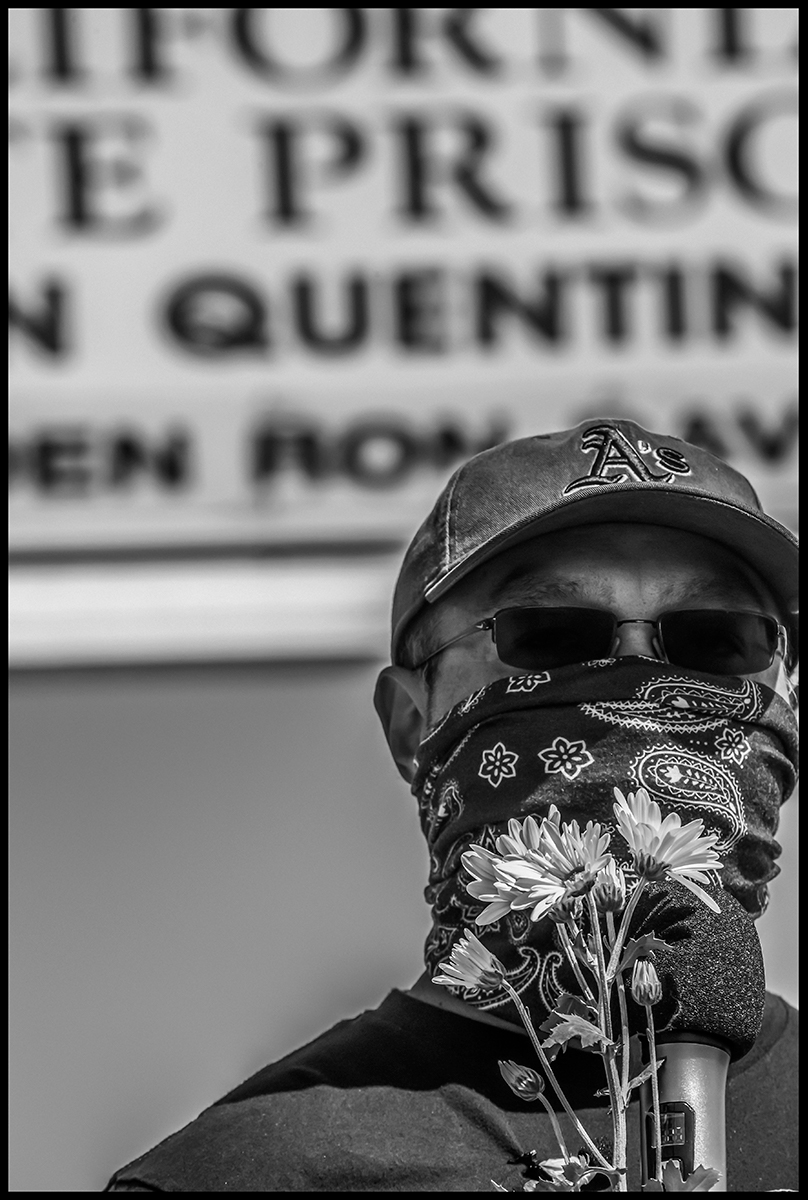 Danny Thongsy, a former prisoner, faced deportation to Laos by Immigration and Customs Enforcement after he was released from San Quentin, but community pressure won his release. 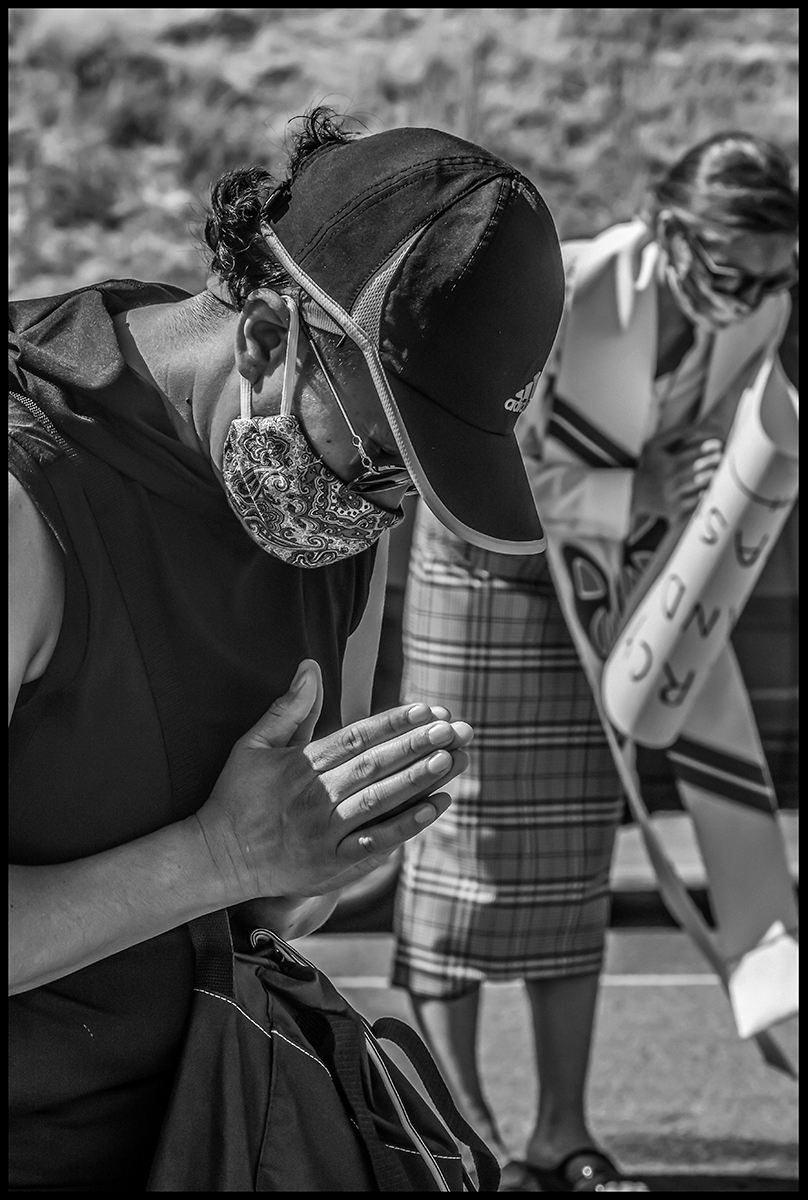 Participants pray for the prisoners who have died. 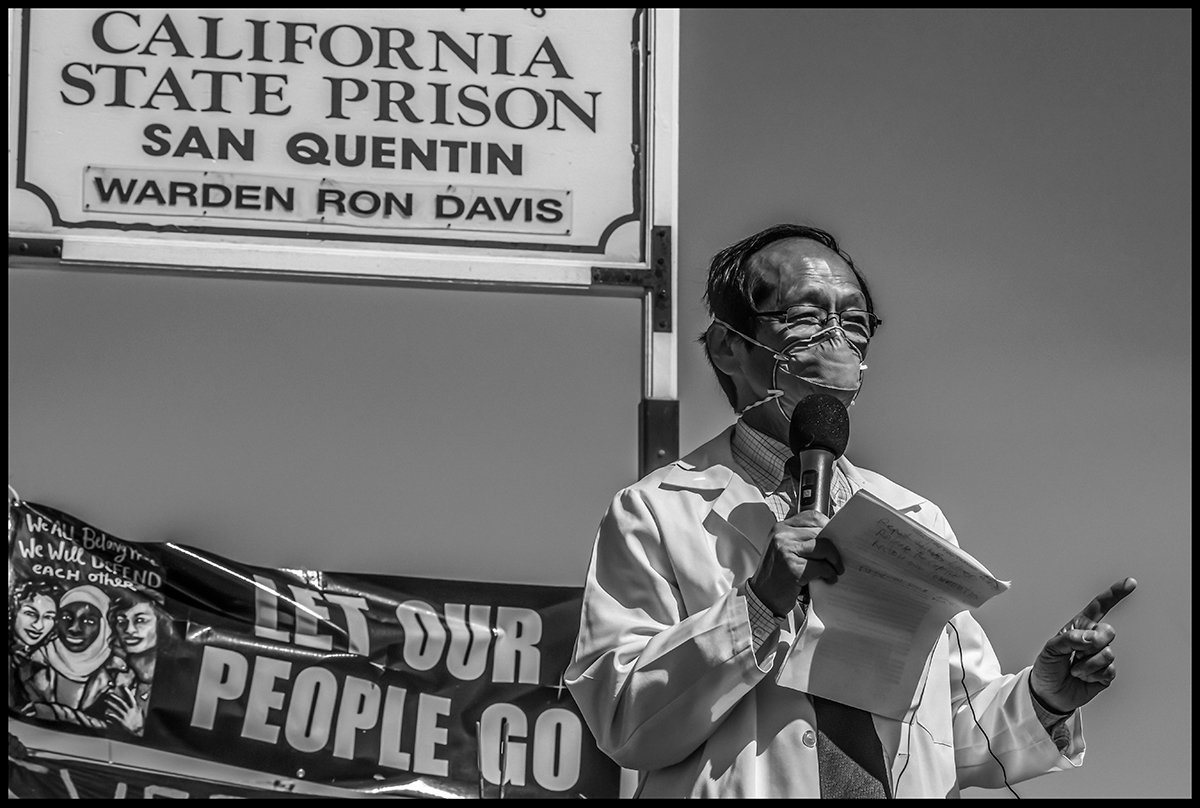 Dr. Art Chen, a doctor at Asian Health Services in Oakland, tells vigil participants, “There is no “safe” way to socially distance in overcrowded prisons, operating well above 100% capacity. There is no safe way to transfer incarcerated folks from one prison to another without risking a new hot spot.” He asked Gov. Newsom, “How many more incarcerated folks will face death during this pandemic before you begin mass releases?” 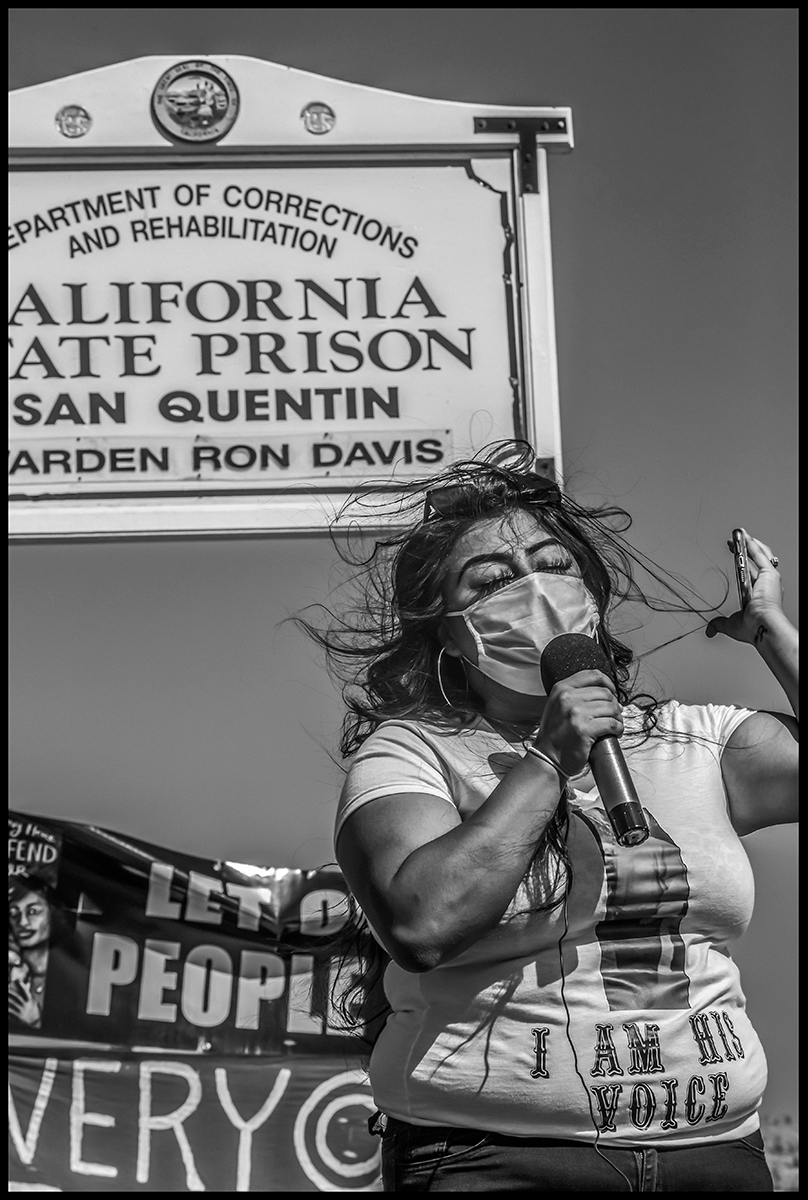 Laura Mondragon is the wife of a prisoner, and she talked about the trauma of not knowing what was happening to him. Phone calls between prisoners and family members were cut off five days before the vigil. 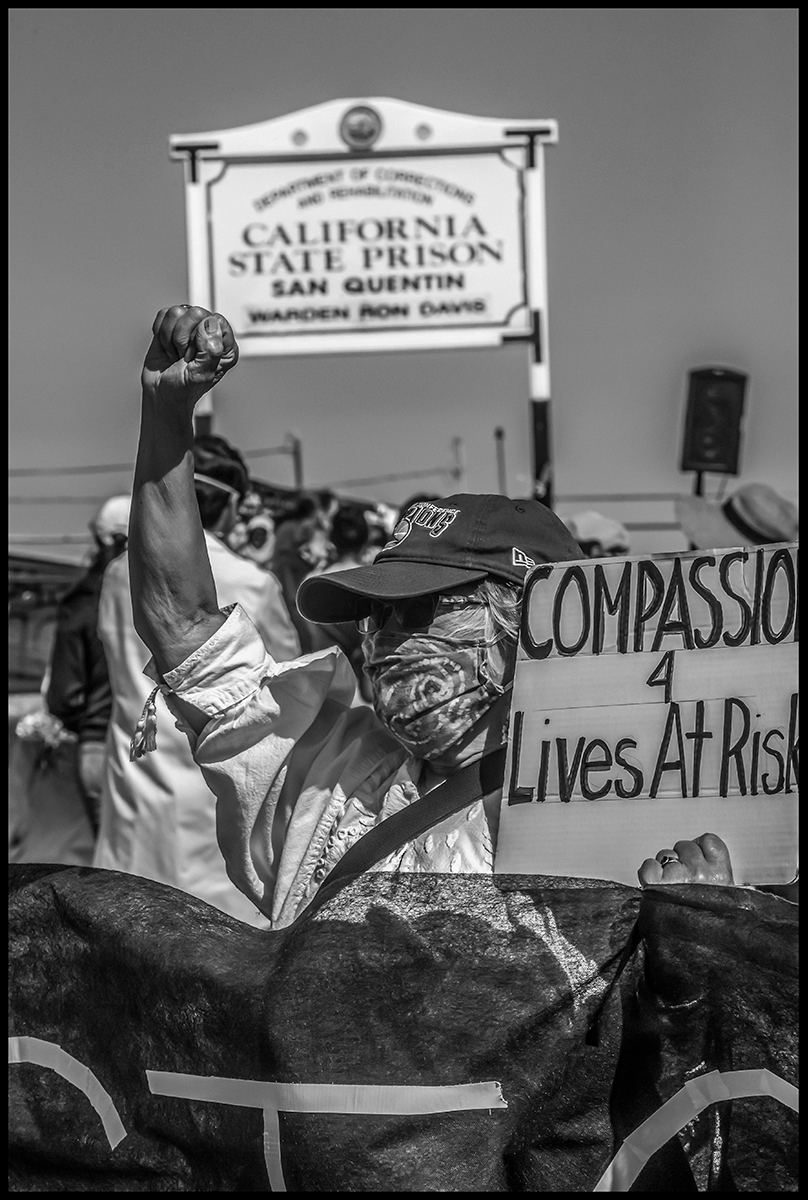 Lillian Galedo, director (retired) of Filipino Advocates for Justice, holds a sign and the banner. 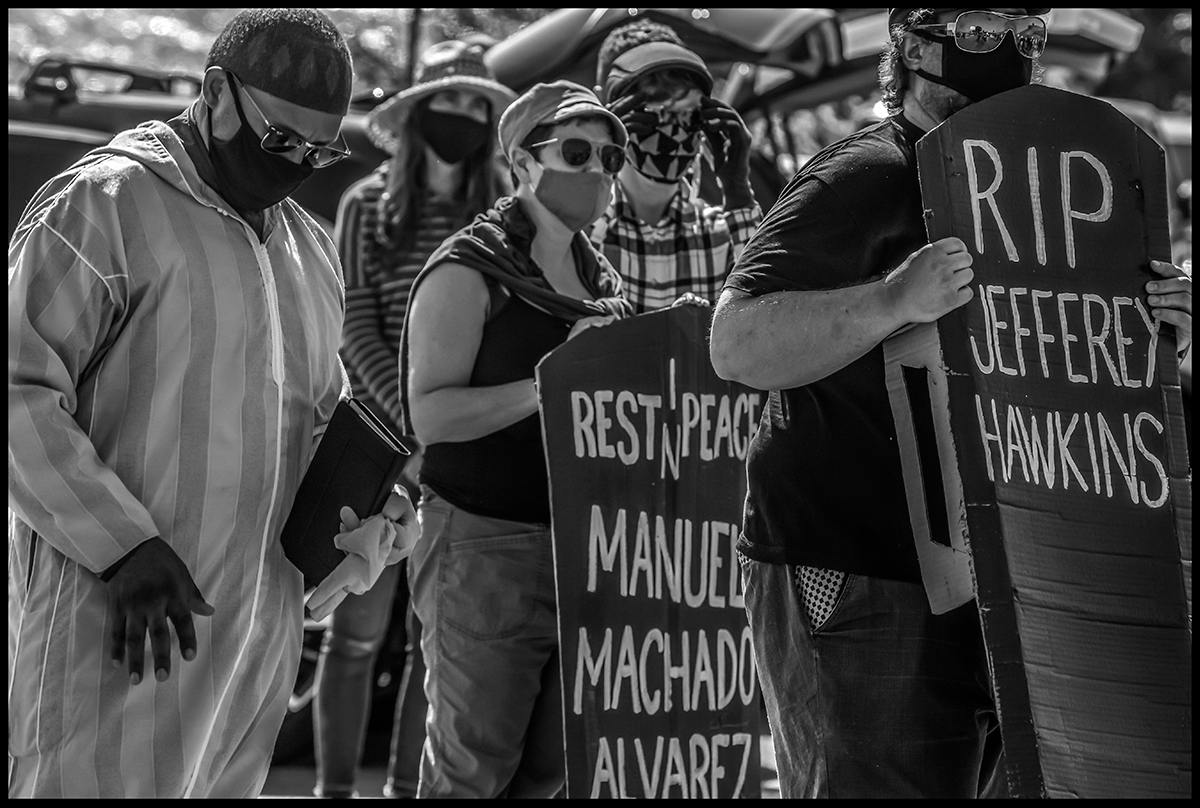 Saabir Lockett, special projects coordinator at East Bay Alliance for a Sustainable Economy, read a passage from the Koran at the vigil. 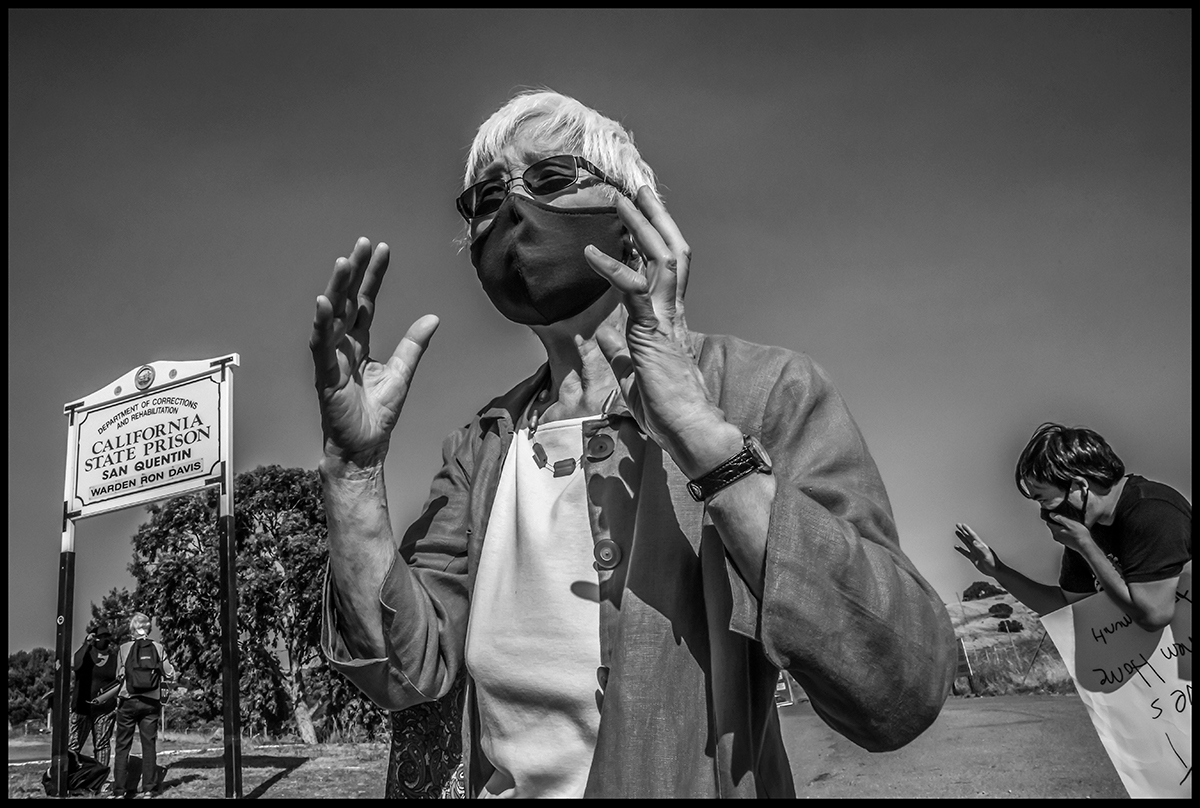 Related Topics:California Department of Corrections and RehabilitationCDCRcoronavirusFeaturedSan Quentin
Up Next