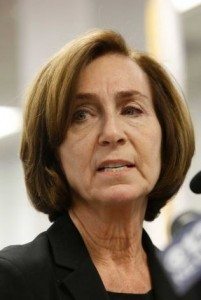 Last week’s announcement of a settlement between the state of California and two political campaign organizations linked to the Koch brothers fittingly coincided with the centenary of the first scientific explorations of Los Angeles’ La Brea Tar Pits. The history of the tar pits is pretty straightforward: For at least 38,000 years, thick, petroleum-based asphaltum has oozed up from fissures at the site, a noxious goo that long ago entrapped hapless animals as well as the predators that tried to feast on them.

Rather more recent and less explored have been the political intrigues of petroleum tycoons Charles and David Koch, although news of their ambitions is slowly rising to the surface, too. Last year a daisy chain of groups with Koch connections funneled campaign contributions into a pair of policy measures on the 2012 California ballot: Proposition 30, a tax-raising measure designed to restore much-needed funds to public education, and Proposition 32, an attempt to curtail the ability of labor unions to raise political money from membership dues.

The brothers, who are not California residents, were dead against Proposition 30 and all for Proposition 32. Campaign filings with the state’s Fair Political Practices Commission (FPPC) and a lengthy deposition conducted by the commission of Republican operative Anthony Russo provide hints of just how much so. Here is a brief rundown of events:

An email to Charles Koch. (Click twice for full image.)

The October 24 FPPC press release announcing the settlement minced no words, claiming that the “two nonprofits operated as part of the ‘Koch Brothers’ Network’ of dark money political nonprofit corporations.”

It is perhaps, however, a measure of how much contemporary political funding resembles a horse auction that nearly none of the money transfers involved in this scheme violated any election laws. CPPR and ARL were busted on the relatively minor technicality of failing to disclose the names of donors. Both the attorney general’s and FPPC press statements claimed that the Arizonans’ missteps were not considered intentional, and charitably ascribed them to their unfamiliarity with California’s election codes.

Although California Comeback Kid Anthony Russo believes the Koch brothers’ own personal money went directly into his group’s two campaigns (see his email to Charles Koch, in which Russo breezily suggests, “It would be great if you could support the final effort with several million”), a Koch spokesman has denied this. Of course, the Kochs are too smart to leave their fingerprints on this kind of donation, and with good reason – the election-eve news of the brothers’ possible involvement helped rally votes against their causes.

This has left their less sophisticated agents holding the bag. A look at SBAC’s IRS Form 990 for the year preceding the election shows the group claimed assets of $296,907 at the end of 2011. SBAC’s president, Joel Fox, also edits the conservative Fox&Hounds political blog, which predictably protested the disgorgement order. Most of that money, after all, was spent on last year’s campaigns, says Fox.

“We were not given the opportunity to explain that we believe the FPPC has completely misapplied the disgorgement law in this case,” wrote Fox, who by now must be feeling like one of those trapped animals seen in La Brea Tar Pits dioramas. SBAC struck a defiant stance and says it will not pay the disgorgement money, while American Future Fund has not commented on the settlement. When contacted by Frying Pan News for comment, Gary Winuk, FPPC’s chief attorney in its Enforcement Division, did not spell out the commission’s plans.

“We have sent them a notice that the disgorgement is due,” Winuk emailed. “If no payment is received we will consider future actions at that point.”

One very interesting comment Russo made to his interrogators points to a new appreciation among California conservatives that Republicans are in a shrinking minority in this state and that moneyed interests must find other ways to influence public policy beyond relying on the GOP.

“The party wasn’t particularly effective or even an opposition anymore,” Russo explained to state attorneys. His group, he said, thought “we should look to other models to see if we could create pressure for reform.” Russo added that he and his friends were impressed by the effect of Koch money in Wisconsin Governor Scott Walker’s successful campaign to strip state employee unions of their collective bargaining rights.

In the end, the record $1 million in civil fines – and, if the state can collect, the $15 million in disgorgement money – is going to California’s general fund. While the money represents a parking ticket to the Kochs, it could well end up benefiting the state’s school children – the very people the brothers had hoped to deprive of a better education.