Eunisses Hernandez’s toppling of Los Angeles City Councilmember Gil Cedillo came as part of a progressive temblor that shook Los Angeles politics in June. There were other rumblings beyond Northeast Los Angeles Council District 1, a working class, majority Latino district that has been beset by gentrification pressures over the past decade. In Council District 13, home to Silver Lake and Hollywood, UNITE HERE organizer Hugo Soto-Martinez pushed Councilmember Mitch O’Farrell into a November runoff. The incumbent earned the wrath of activists for the unannounced clearing of the Echo Park Lake encampment, which turned into a confrontation between unhoused people and police.

The election also put civil rights lawyer Erin Darling in the lead in the Council District 11 race to replace outgoing Councilmember Mike Bonin, who represents Venice and Pacific Palisades. If Soto-Martinez and Darling are elected, they will join Hernandez and Councilmember Nithya Raman, another progressive who unseated David Ryu in Council District 4 last year, to form a new, formidable block on the council. In addition, Kenneth Mejia, a CPA who was supported by grassroots progressives, is 20 points ahead in the race for city controller against outgoing Councilmember Paul Koretz.

Capital & Main sat down with 32-year-old Hernandez at Café Mi Tierra in Highland Park to discuss her plans for when she assumes office in December. Her top priorities are around housing: “protecting renters,” “preserving deeply affordable housing” and “producing deeply, deeply affordable housing.” Hernandez once wanted to be a police officer but now embraces criminal justice reform. Co-founder of LA Defensa, she ran as a police abolitionist and successfully campaigned to halt construction of a $3.5 billion county jail.

This interview has been edited for brevity and clarity.

Capital & Main: The movement that has propelled your victory has a hunger for structural change that’s also characterized by being more confrontational. Why do you think it has grown in L.A. politics?

Eunisses Hernandez: Many local elected officials are really good at press releases and press conferences, but the conditions of people’s lives haven’t really changed much. In fact, they’ve worsened around us.

People are frustrated with how governments have responded to the crisis that they’ve experienced. We have a generation of people who have organized into these groups because of that collective frustration, and that has pushed them to get involved in electoral politics.

I think the COVID-19 crisis also propelled a lot of people to continue to get involved, even though there was a lot of burnout.

“We have 41,000 unhoused people. How did it get to this point? Because everybody’s passing the buck.”

A good example of this new energy was the recent sit-in at the Los Angeles City Council chambers that shut down the meeting temporarily. The target was an ordinance that banned homeless encampments near schools and day care centers. How would you have voted on that ordinance, which was approved 11-3, and what did you think of the protest?

I would have voted no. [The vote to amend section 41-18 of the Los Angeles Municipal Code] is an ineffective and lazy response to the crisis of people experiencing homelessness.

On this particular issue, I would have supported the people who were protesting and expressing their First Amendment rights. I’m an organizer. My background is in trying to persuade and move the government to do the right thing. Part of that has been to stop meetings. It’s a tactic. Why are we expanding places where people cannot sit, lie or sleep without providing any housing or services? It’s ridiculous.

L.A. voters are frustrated and angry about the lack of action on homelessness. Do you have a sense of why it’s been such an intractable problem? 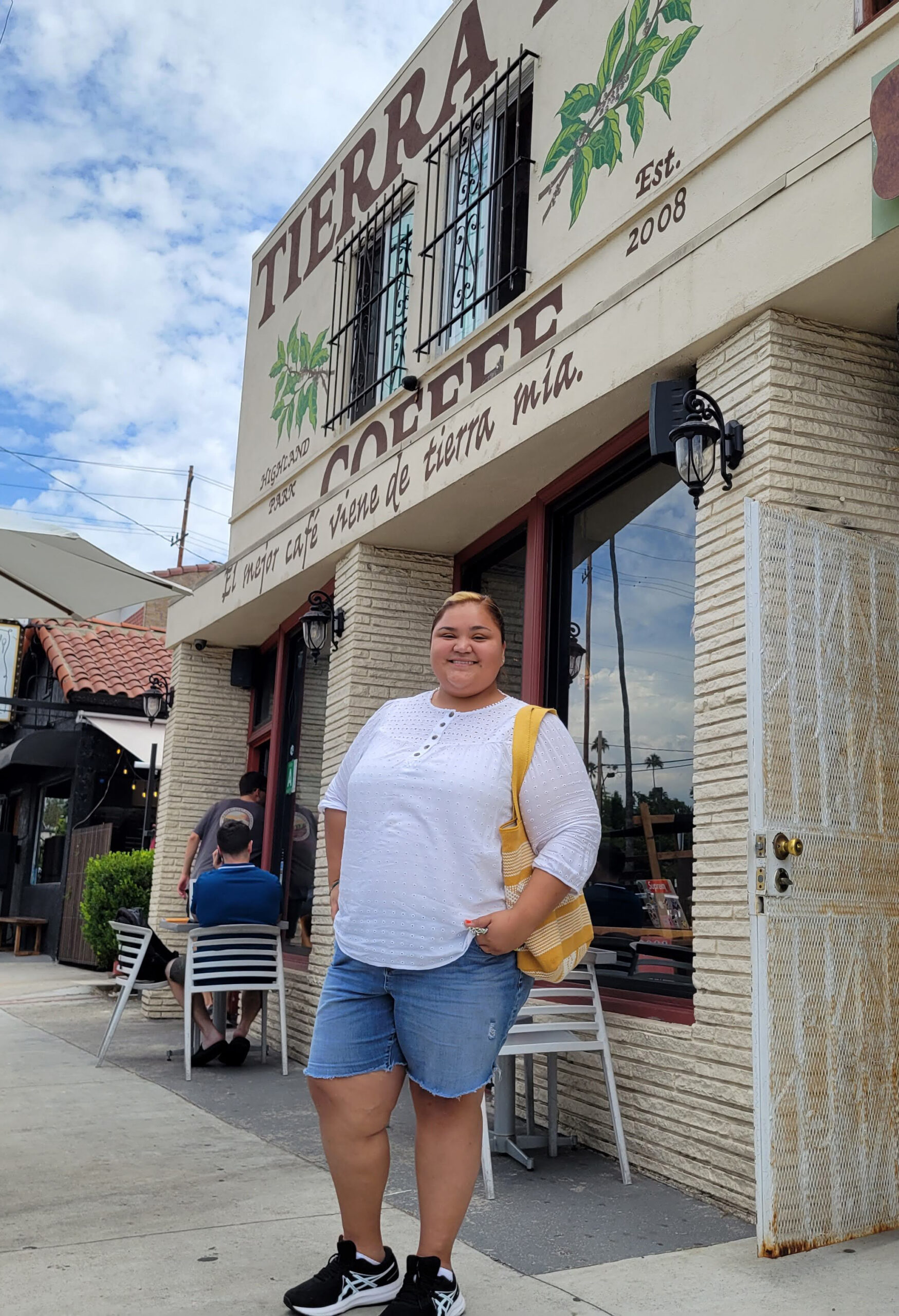 A huge chunk of them are experiencing homelessness because of financial and economic drivers. We didn’t keep them housed as renters. We didn’t keep them housed when they were in their housing. The second piece is people who are visibly experiencing problematic substance use and mental health needs. The Los Angeles County Department of Mental Health Services does not provide enough services. We don’t have enough drug treatment. We don’t have enough co-occurring disorder treatment.

At the city level, there’s been a lot of money that has been put into solving this crisis, but there hasn’t been a lot of accountability on how that money has been spent. Where has that money gone to? Who has managed that money? I’m excited to work with [city controller candidate] Ken Mejia on bringing accountability to these dollars because it feels by the numbers that we should have built much more housing than we have now. They have been very slow.

And I know that there’s a lot of barriers to building affordable housing or low income housing, but it just hasn’t happened, or even housing for people who are experiencing homelessness, like permanent supportive housing. It just feels like it’s a process that folks have been dragging their feet on.

We have 41,000 unhoused people. How did it get to this point? Because everybody’s passing the buck. No one’s actually building out the care we need or the number of housing units we need. No one’s really doing that.

The California Apartment Association spent heavily to defeat you. Why do you think that is?

That’s because I believe that I put renters at the forefront of my campaign. Over 60% of the people in this district are renters. I have had to rent rooms in my house so that we could pay our mortgage during the recession. I’ve been a landlord in that sense.

But I also recognize that most landlords are corporate landlords. It’s not people like me or others who are doing it to survive. That’s a very small percentage, and even they are not getting the support that they need. But I believe that they really did not like what I was uplifting and what I was prioritizing, which is to keep renters housed.

I’m not saying don’t pay landlords. I’m just saying let’s figure out how to keep renters housed. And if that’s the city having to give more support and so people can pay the rent, then that should happen.

“Right now, police are doing too much work that they shouldn’t be doing, that they themselves have said they don’t want to be doing, like answering mental health crisis calls.”

And do you know what approach you’re going to take towards developers who want to build market rate housing in your district?

I want to build a lot. But I want to prioritize building affordable housing. And so I have already begun to have conversations with developers who focus on low income housing, on deeply affordable housing. And so that’s where I will begin. As we move forward, we’ll meet with others, but it was always going to be about equity for me. Even if developers want to build market rate housing, there’s some projects that [don’t require discretionary approval from City Hall]. How do we figure out how we get equitable housing in there? How do we make the housing match the income of this neighborhood? Not even teachers can afford to live here.

You ran as a police abolitionist in the campaign. Given that the LAPD is not likely to go anywhere soon, what approach do you want to take to ensure that it contributes to people’s safety while you’re in office?

Right now, police are doing too much work that they shouldn’t be doing, that they themselves have said they don’t want to be doing, like answering mental health crisis calls. I’m excited to meet them at the table to have this conversation. We need to expand the county’s psychiatric mobile response teams, which are led by health care clinicians, doctors and others that go out into the riverbeds, into encampments to engage people. Those are led by people who have dedicated their careers to dealing with these types of situations.

I know that it’s a long-term strategy, but every budget decision that we make is either going to move us closer or three steps back. As long as we’re moving forward and chipping away at this system that has us in the situation that we’re in now, in which many people don’t feel safe, it gives us a little bit of space to breathe and reassess.

“There’s just so much wealth inequality. A lot of it has to do with intergenerational consequences of having a criminal record impact your family.”

You will also be delivering constituent services that require you to have a relationship with police. How do you accomplish that while staying true to your position?

You meet those needs and you figure out what services are going to meet their needs. If my constituents want to keep relying on law enforcement, we can’t stop that. But I have the power to build out other responses that have proven to be much more effective at keeping people safe or responding to harm and violence.

One reason for the housing and homeless crisis is the high level of economic inequality. Is there something that you as a councilmember can do to address this?

You have houses next to mine selling for over a million dollars. Yet Chinatown, just a few minutes away, their average median income is close to $20,000. MacArthur Park, Pico Union it’s around that as well. And so, there’s just so much wealth inequality. A lot of it has to do with intergenerational consequences of having a criminal record impact your family.

I’m interested in creating more resources for first-time home buyers. I’ve also talked about expungement clinics and providing day care. The need for subsidized day care here is so huge. There are different ways that, as City Council members, we could be the conduits to some of these services that are going to remove barriers so that people can seek the level of economic freedom and opportunity that they want.

Is there an L.A. elected leader whom you admire?

Supervisor Holly Mitchell is someone that I look up to. I was a fellow with the Women’s Foundation California, where they teach you how to write a law at the state level, find an author for that law, and get it signed by a governor. She took our idea [around restoring sentencing discretion to judges in felony convictions], and became a co-author and ran Senate Bill 1393 through the state Legislature. And we got it signed by the governor.

From the beginning, Holly Mitchell was someone who has believed in me and the work that we’re doing. Her bravery to believe in me and our ideas, that for some have been too wild, gives me a lot of hope that I can continue to do the things that I believe in.