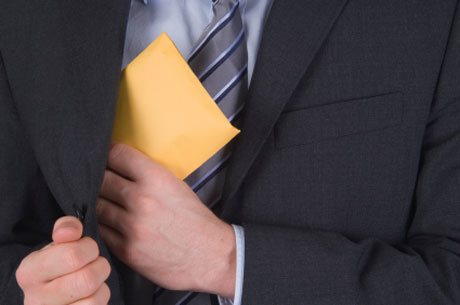 We Americans don’t like to think of our country as corrupt – or at least as corrupt as Japan, whose yakuza crime syndicates have taken over much of the legitimate business sector, including providing materials for the Fukushima nuclear reactor and scooping up homeless people to work as cleanup crews there. Of course we’re not like India, where things only get done with a bribe. And hopefully we’re not as bad as Russia, where this year’s Winter Games have been called “the most corrupt in Olympic history.”

Still, corruption sure feels pervasive here. Last year the people who run the banks, insurance companies and stock brokerages contributed $10 million to the legislators who sit on the House Financial Services Committee. That body makes the rules for the finance industry. Known as a “juice committee” because membership is so lucrative, House leaders added 61 more positions to the panel, because so many Congressmen wanted to sit on it.

When a legislative body passes a law that protects a business from its customers, or an employer from its employees, because the legislators are indebted to their contributors who are big corporations, that’s corruption – and its effects last a lot longer than the Winter Games.

One of Congress’ worst offenses has been the permission it granted banks and credit card companies to shield themselves from complaints by cardholders. By accepting a credit card, users agree to settle all disputes through an arbitrator selected and paid for by the company. A report from Public Citizen in 2007 said that such arbitration found in favor of the company 97 percent of the time. The same fine print bars consumers from appeal or from pursuing class action lawsuits. The clause says we signed away our rights when we took the card.

Another legal corporate gambit – seemingly borrowed from the credit card industry – locks individual employees into agreements precluding appeal either by class action lawsuits or other collective efforts. To be hired, workers must sign a document agreeing they will not contest their working conditions or earnings. This practice occurs in warehouses in California’s Inland Empire as well as among housing developers based in states like Texas, where one might expect such corporate misbehavior. The results leave workers legally stuck without redress.

But sometimes people fight back. A group of iron workers – the people who put rebar into concrete forms – on a job in Blythe, California, had to sign such contracts, first to get hired, then to get paid each week. They did hot, dirty, body-breaking work in temperatures up to 117 degrees, relieved themselves in filthy portable toilets that were never cleaned or emptied and slept in company provided facilities, shacks or cargo containers, while the boss called them “monkeys.” They had to sign a form saying they worked 40 hours a week and received lunch and other breaks, when in fact they worked more hours and received no breaks at all.

So, the workers walked out and one of them called a union. Now the construction trades are on the case, tracking everywhere that company holds sub-contracts, like downtown Los Angeles and Santa Monica. They offer support, throw up picket lines and organize workers. Of course, no one knows how this will actually play out. It’s a long shot that these workers will ever see the money they’ve earned, but it’s a breakthrough, because the workers stood up for themselves.

Now there’s another opening for credit card holders. The new federal Consumer Financial Protection Bureau may outlaw arbitration clauses that preclude appeal or litigation. It hasn’t happened yet, but more customer-friendly rules are under consideration.

Draconian contracts whose terms of service stack the deck against us as individuals – consumers and workers – exist because legislators are beholden to corporate donors. That’s a system of corruption, American-style.