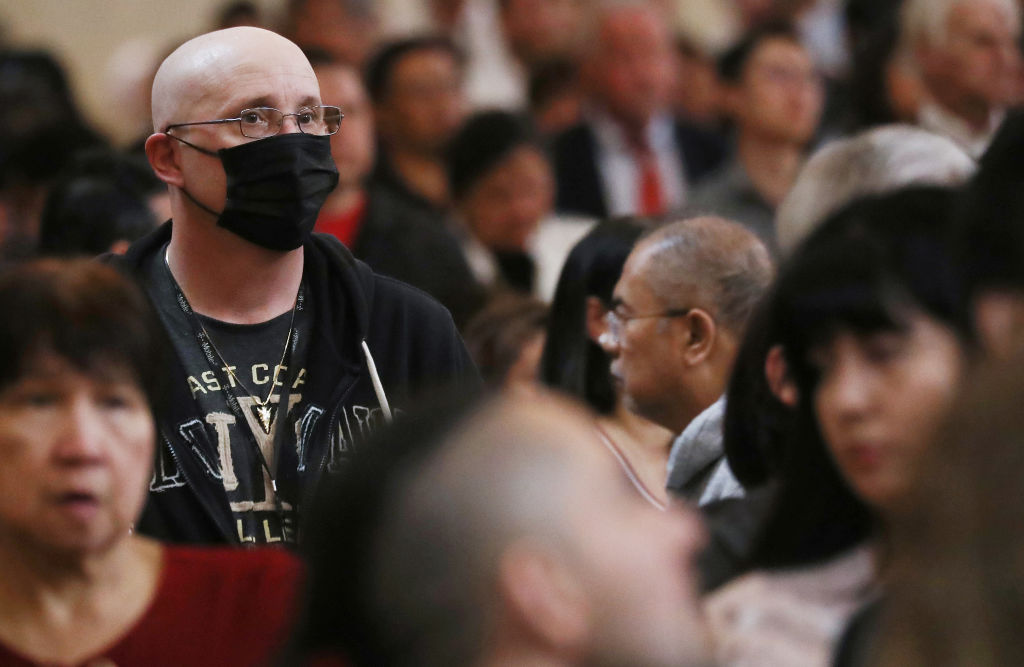 Ash Wednesday service at Los Angeles' Cathedral of Our Lady of the Angels. (Photo by Mario Tama/Getty Images)

Amparo Ramirez long ago gave up her company-sponsored health plan, and for reasons that are becoming all too apparent for low-wage service-sector workers as the coronavirus spreads: Her premiums were too high, and the co-pays and deductibles put it well out of reach. “It’s really bad health insurance, and it would take up to half a paycheck,” she says. The single mother of two makes $15.25 an hour, or $610 a week before taxes, working at Los Angeles International Airport for LSG Sky Chefs, the world’s largest airline food catering service. Her apartment in nearby Culver City costs $1,700 per month.

Ramirez says she lost five days of work recently after cutting her finger at home, rendering her temporarily unable to perform her food-preparation tasks. The time off was her allotted sick leave for the entire year. However, Ramirez says through a translator, “I cannot afford to miss. If you miss work, they look at you differently.” Her co-workers, she adds, feel the same way. So if Amparo Ramirez is feeling ill, which she says she currently is, she is going to work at LAX, the second-busiest airport in the U.S. If that illness turns out to be the flu – or worse — she is still going to work. Her Sky Chefs division caters American Airlines, Korean Air and Aeromexico, among others.

On a macro level, the coronavirus story involves governmental response times, lack of adequate testing units, political maneuvering and spin. On the ground, by contrast, it is a tale more than 100 years old. The poorest, the uninsured and the underinsured will be disproportionately affected; they will get sick in large numbers, they may unwittingly expand the scope of the problem, and they will have little latitude to do much about it.

“We have experiences with other infectious diseases going back to 1918 that tell us this is true,” says Melissa Marshall, CEO of CommuniCare Health Centers, which provides comprehensive health care services to those in need in Northern California’s Yolo County.

Not so much has changed in a century. During the Spanish Flu pandemic (H1N1) of 1918-19, which is estimated to have killed 50 million people worldwide and some 675,000 in the U.S., poor immigrant communities were the hardest hit. Many families lived in crowded, substandard housing. Language barriers, entrenched poverty (and thus inadequate care) and racism have all been cited as contributing causes to the pandemic’s swath cut through San Francisco, where more than 3,500 died.

More recently, a 2016 CDC study found that today people in neighborhoods where most live below the poverty line are roughly twice as likely to get the flu as those in wealthier areas. Among the reasons: low rates of vaccination owing to the underserved nature of the poor, and crowded housing that tends to spread infection. It has a familiar ring.

Having access to health services is one thing; the ability to stay home while ill is another. More than 40 percent of Americans who work service-industry related jobs have no contractual right to paid sick leave, and fewer than one quarter of them can afford to take it, according to data compiled by the Bureau of Labor Statistics (BLS). These are the jobs – retail, housekeeping, food and entertainment, etc. – that are most likely to put those workers in broad contact with others. The situation is a recipe for accelerating the advance of something like coronavirus.

In a union survey of 124 LSG Sky Chefs catering workers (from the more than 900 employed by the company at LAX) conducted last November, more than a quarter reported skipping or delaying medical care, prescriptions or treatment for themselves or their families in the past 12 months because of the cost. Fully 60 percent said they had gone to work sick.

“If you have people exposed to lots of other people, who are also unable to access their health care and yet feel pressure to be at work, that is literally a toxic combination,” says Rachel Sulkes, communications director for Unite Here Local 11. The local represents 32,000 workers employed in hotels, restaurants, airports, sports arenas and convention centers in Southern California and Arizona. (Disclosure: The union is a financial supporter of this website.)

When Ramirez, a union member and a lawful permanent resident of the U.S., got bronchitis five months ago, she traveled to Tijuana, Mexico, in order to buy medicine at a price she could afford. (“It would be $160, $180 just to see a doctor” in Los Angeles, she says.) About two months later, the bronchitis returned, necessitating another trip to Tijuana. At no point did Ramirez stop going to her job. She has worked for 30 years in the states, but the Sinaloa native lives a day-to-day existence. Currently battling a urinary tract infection, she knows she is supposed to be drinking copious amounts of water, but “I don’t like to take time off the [food prep] line to drink water, so it gets worse.”

Sulkes says that while many of Unite Here’s members enjoy excellent health insurance, it’s not true across the board, and can vary wildly from company to company. LSG Sky Chefs employees scheduled a three-day fast last month as part of an effort to win improved wages and benefits. In response to queries for this story, LSG Sky Chefs issued a statement that read, in part: “Our negotiating team and a federal mediator have been working since May 2019 to negotiate in good faith with the union representing our employees. Our company has offered improvements in wages and is discussing numerous other issues covered by our collective bargaining agreement.”

In the meantime, the work goes on – one of several issues that may ultimately factor into the disproportionate effects of coronavirus on the working poor.

“We know that people of lower socioeconomic status are dealing with, often, several issues at once,” says CommuniCare’s Marshall. “They may have crowded living situations or be homeless. They may have food insecurity or poor nutrition. They may have little or no access to health care, or fear seeing a doctor because they are worried about their immigration status.”

There is another question: How much of the useful information about coronavirus penetrates poor and immigrant communities, where both language and access to information can be barriers? When I mentioned the pandemic to a physician acquaintance, he replied, “Knowledge is power, and the disenfranchised have less access to knowledge as well as services. Information is changing by the hour – even doctors are having trouble keeping up – and people who don’t have access to it are going to be at risk.” They are also, many of them, going to go to work.

Sulkes says her union has been working with companies to alter policies amid the growing spread of the disease. Hotel room cleaners in California, for example, generally are expected to complete 12 rooms each day (in Arizona, the number is 16), and their union has proposed decreasing that total by one room so that workers can be more thorough and also take time to clean and disinfect themselves as they move from one assignment to the next.

Another goal is to persuade companies like hotels and conference centers to suspend their absenteeism policies and tell sick workers to stay home. That may become easier over time, Sulkes says: “Some of them are starting to see cancellations, as people postpone big events and gatherings.”

Still, she notes, “It’s common for workers to push themselves to show up, to go to work. That’s one reason the boss likes them, right?”

Related Topics:coronavirusFeaturedUNITE HERE Local 11
Up Next