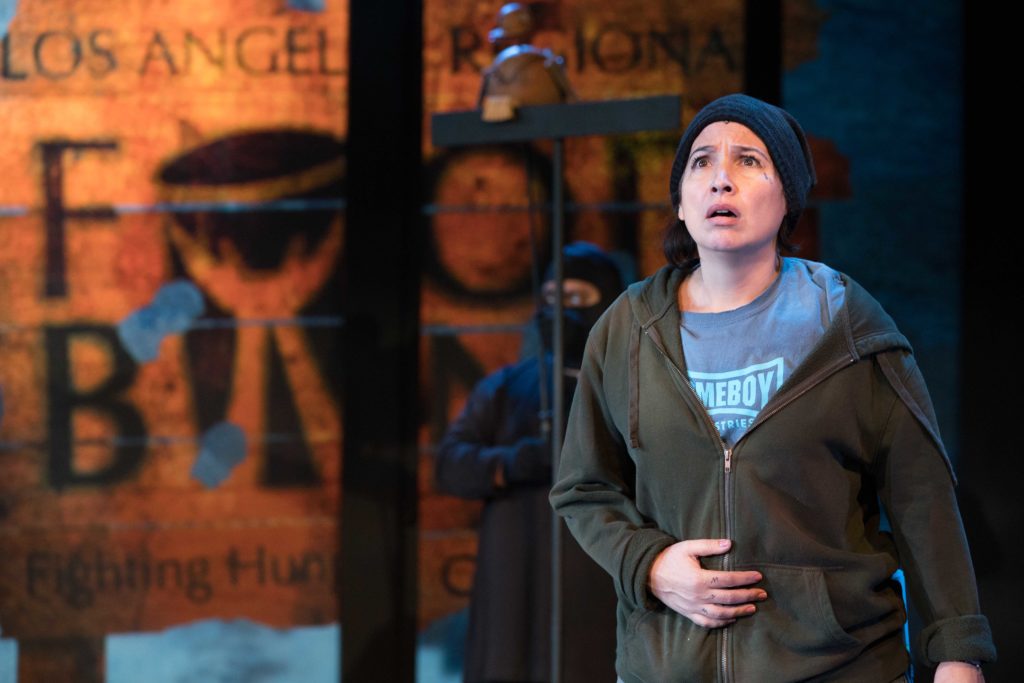 Cristina Frias in The Magic Fruit. (All photos by Jenny Graham)

Magic Fruit is the latest (and last) offering in the Cornerstone Theater Company’s Hunger Cycle of nine plays exploring “hunger, justice and food equity issues.” It opens with sisters Tami (Cristina Frias) and Kiko (Rachael Portillo), frantic and bedraggled, stumbling through a post-apocalyptic Los Angeles in search of refuge from a shadowy serpentine monster — hunger itself. Their quest for salvation transports them through a myriad of fantastical scenarios in which the prime adversary is a mega-corporation that aims to control worldwide agricultural production. Produced through a partnership of artists and community members, a Cornerstone hallmark, the show features major life-or-death themes, ecological warnings and some spectacular tech — but the story is convoluted and much of the acting too weak to ignore.

Directed by Shishir Kurup, playwright Michael John Garcés’ labyrinthine plot takes inspiration from Mozart’s The Magic Flute. In this rather loose adaptation, Tami, a former gang member, and the younger Kiko become separated after Kiko is abducted by the temperamental Queen of the Rain (Page Leong). The spine of the story is Tami’s search to rescue Kiko, which can happen only if she can recover the Queen’s missing heart. This organ (named Corazón and depicted by Bethany Nava in a sparkly blue costume) has been captured by the bad guys, who plan to use her blood to make seeds that require no rain — an enormous plus in a world ravaged by drought. The most interesting (and least whimsical) scenes depict the machinations of this Monsanto-like corporation to gain and retain power. Eight actors represent this monolith, whose most vocal spokesperson, curtly played by Bahni Turpin, is suitably and incisively ruthless.

As Tami, Frias provides a strong and likable anchor for the disparate narrative; the world is coming apart around her, and her desperate resistance is charismatic. Portillo, whose character, unfortunately, is off-stage for quite a while, is another strong and sympathetic presence to root for.

But other performances drain the production of energy. Inexplicably, Kurup has cast the major role of Pageni, a free-spirited Native American who befriends the women, with an inexperienced actor (Courage) whose delivery underscores the character’s airheaded blandness. Nava and others also appear to be relative newbies onstage. I understand that, by design, not everyone here is supposed to be professional, but characters essential to moving the action forward should be played by one.

The production’s most striking aspect is the accomplished work of its tech team — most notably video designer Sean Cawelti’s absolutely stunning apocalyptic imagery, but also the intricate sound and artful lighting by John Nobori and Geoff Korf respectively, and the droll imaginative costumes by Meghan E. Healey. It is these combined elements which best relay Magic Fruit’s haunting message.