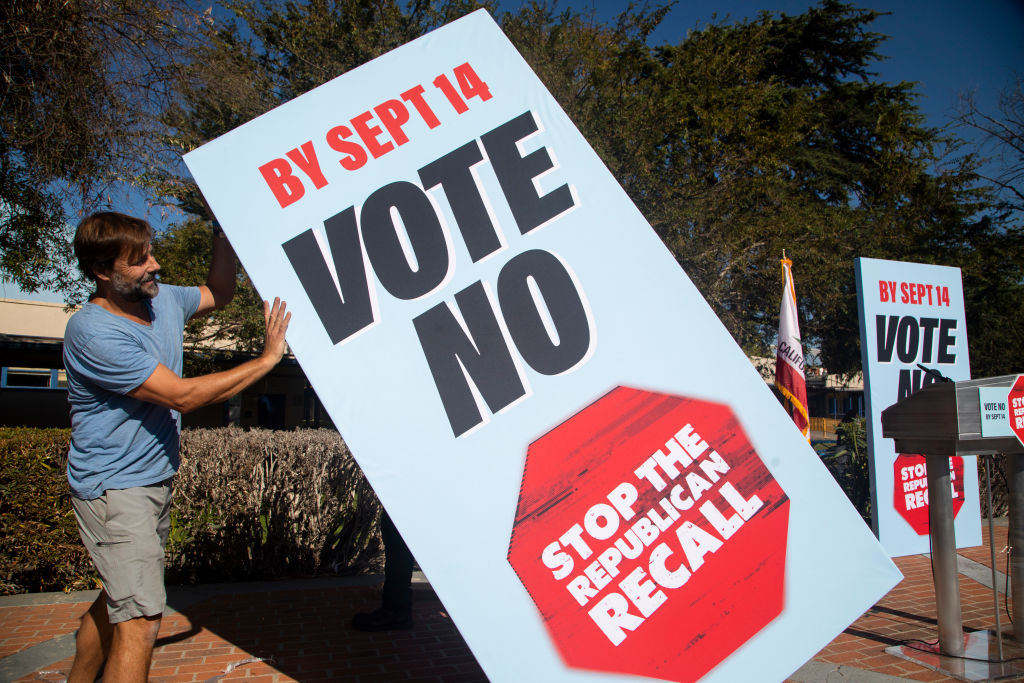 Iretha Warmsley has knocked on doors in South L.A. during election cycles for at least 12 years since she joined SCOPE, Strategic Concepts in Organizing and Policy Education, a 20-year-old organization that operates out of a former firehouse.

With the vote to recall or retain California Gov. Gavin Newsom coming up in less than a week, Warmsley has been braving the heat to speak with voters about the election and encourage them to mail in (or drop off) a ballot.

During one recent door-knock visit, a 30-something Black voter came to the door when Warmsley stopped by to urge her to vote no on the recall.

“She was like — ‘Oh I hate politics, I’m not voting for anything.’ She just went on and on,” Warmsley said. The voter continued her rant saying, “I didn’t get none of the stimulus money. He doesn’t wear a mask. Why should I?”

Warmsley, who was once herself a reluctant Black voter, was ready.

“I said, ‘This is real personal to me because I’m a person like you.’ When they came to the door to talk to me about politics or anything like that, I just didn’t believe in it anymore. And I had a really bad attitude,” said Warmsley. But a decade or so ago, a person from SCOPE showed up at Warmsley’s door. She later attended a SCOPE meeting and has been doing precinct work during election cycles ever since.

The Sept. 14 special election question about whether California voters should recall Gov. Gavin Newsom has produced a lot of head scratching among the electorate.

“We get paid sometimes and sometimes we volunteer. When it’s a job it’s great, but when it’s not, I still do the work, whatever’s needed to be done,” says Warmsley. “I have stayed faithful to it.”

This year she is getting an hourly wage for her 3:30 to 8 p.m. shift supported by the Million Voters Project Action Fund Committee to Oppose Newsom Recall.

Warmsley walked the reluctant voter through the recall voting options — polls, mailing or dropping it off? The voter wants to go to the polls and will get a postcard with the address.

The Sept. 14 special election question about whether California voters should recall Gov. Gavin Newsom has produced a lot of head scratching among the electorate — What is this? How do I vote? Do I vote on the recall and then for one of the dozens of candidates below? And why are we voting again?

Team Newsom had been squeaking by in the polls for a while but in the first week of September a key poll seemed to pull him from the knife’s edge of defeat to an easy walk to complete his term next year. The Public Policy Institute of California poll put likely voters’ opposition to the recall at 58% — almost 20% ahead of those who want Gov. Newsom out.

The recall and its confusing process — vote yes or no, maybe for one of 46 candidates also listed on the ballot but what does that do to the top-line vote? — is a punchline for some people.

“What’s at stake are two Californias, whether we make strides on gains we have attained so far or are driven back.”

But for California’s communities of color who have successfully advanced protections for immigrants, fought for eviction protections during the COVID pandemic and supported Newsom’s health protection measures, it’s not funny.

“What’s at stake are two Californias, whether we make strides on gains we have attained so far or are driven back,” says Amado Uno, who runs the Million Voters Project, an alliance of seven California regional community networks that include nearly 100 local organizations, including SCOPE. Those organizations keep contact and build relationships with their members throughout the year whether an election season or not.

“The direction of our state is at stake: Do we recall or do we keep what we have?”

Polls don’t speak as loudly as actual ballots, says Karla Zombro, the deputy director for the Million Voters Project. The shift in the polls doesn’t pull Zombro off-task running a statewide get-out-the-vote operation that now reaches 15,000 voter contacts (in seven languages) per day via phone with a force of 270 phone bankers. Lately, after vaccinations have ramped up, and with a carefully crafted safety protocol, 90 canvassers are door-knocking in local communities.

Zombro cares only about turnout numbers and has been tracking the daily ballot count — not the polls.

“It’s all about who turns out to vote. Only 20% of voters have voted so far, the final 10 days,” Zombro says. She has a tight eye on the turnout numbers — the state reports data daily, and Zombro collects it from the MVP voter data platform. She also keeps track of the reports from the field team that do phoning to members from laptops and cell phones at home. “Our team leaders are on a call with us and share the top lines of what people are saying. We’re tracking how voters are responding.”

“At first it was a lot of people just didn’t know this was even happening. People seem more aware about it [now]. As we explain how the thing works, the first objection is the process itself.”

The campaign to defeat a Newsom recall has raised plenty of money to fund GOTV operations like the Million Voter Project in addition to media and other outreach. Recall opponents have raised nearly $70 million from such donors as tech magnate Reed Hastings, building trades and health care unions, as well as California’s Service Employees International Union. (Disclosure: The SEIU is a financial supporter of this website.)

“There was a sense early on that this recall was all political — Californians would sniff it out and it was never going to get momentum. And then there were some polls that said, wow, this recall could actually happen.”

Mark DiCamillo, director of the Berkeley IGS Poll, a nonpartisan survey of California public opinion on matters of politics, public policy and public affairs, noted in The Guardian that “turnout is likely to be far higher among Republicans than Democrats and ‘no party preference’ voters. And, since nearly all Republicans favor Newsom’s ouster, a larger proportion of likely voters are voting yes.” However, Republican fundraising is scantier than Democrats — over $13 million as of Sept. 9.

The recall measure was launched by retired Yolo County sheriff’s sergeant Orrin Heatlie, and stalled for months until a burgeoning COVID crisis and a bad-optics unmasked birthday dinner for Newsom at the pricey Napa Valley restaurant the French Laundry lit up the signature-gathering effort. The numbers bumped up to the nearly 1.5 million needed to put it on the ballot.

That took some by surprise. “There was a sense early on that this recall was all political — Californians would sniff it out and it was never going to get momentum,” says Efrain Escobedo, vice president in charge of education and immigration programs at the California Community Foundation. “And then there were some polls that said, wow, this recall could actually happen.”

But in traditionally low-turnout communities like those the MVP organizations work in, abundant confusion about the process can work to inhibit voter participation.

“‘What is a recall election? Why do we have this election happening?’” are examples of the questions her volunteers hear, says Angelica Salas, executive director of the Los Angeles-based Coalition for Humane Immigrant Rights (CHIRLA), a Million Voters Project member organization.

This last election in November was such a consequential one for immigrants, she says.  Explaining yet another election requires “a lot of education of what this is all about, and what’s at stake, just actual information. People want to understand how to vote — The ballot, are we going to receive ballots in the mail?”

CHIRLA has built relationships in immigrant communities through workshops and clinics that help immigrants adjust their status, attain citizenship, register to vote and stay connected through phone banking, social media and a presence on mainstream news sources consumed by California’s immigrant communities.

Those kinds of relationships are the secret sauce that makes the MVP get-out-the-vote model work — you don’t just parachute into a community or do a barrage of robocalls during an election cycle and then disappear.

California Calls, another MVP member organization, has maintained relationships with community members throughout the pandemic by working in partnership with the state to provide connections to COVID vaccinations.

“In this COVID-19 environment that we live in, politicians are in position to make life and death decisions.”

Live Free California is not an MVP participating organization but rather part of the national faith-based social justice network Faith in Action. The organization’s approach is local engagement around policy issues through the faith community. Live Free California does not do direct voter education work, but organizers within their network of around 20 federations, many Black-led, do.

Kornegay told listeners it’s “a surprise election” because it’s a recall. He pleaded with voters to “know that your voice counts, and that every voice counts … We want our folks to know that, to follow your investment [and] … not just sign a ballot and surrender it and get the politician who is being elected and then go back to your normal life.”

“In this COVID-19 environment that we live in, politicians are in position to make life and death decisions.”

The League of Women Voters of California is not affiliated with MVP but has collaborated with the alliance on voter education about such ballot initiatives as Prop. 15, an unsuccessful November 2020 measure to close corporate tax loopholes in order to create more school funding in California.

The non-partisan LWV boasts a decades-long track record of voter education to encourage participation. For the recall special election, “We started out by creating a toolkit for both the League of Women Voters of California and local leagues around the state to use in reaching out to voters,” says Executive Director Stephanie Doute. “We worked with the NALEO Educational Fund and Asian Americans Advancing Justice to translate it into a total of nine languages — we are always working to reach as many voters as possible in ways that will be most useful to them.”

This election cycle LWV adjusted its toolkit to respond to the lack of clarity around the recall process. “We are encountering some confusion — Do I have to vote for the second question? If I vote for the second question, is that going to nullify my answer to the first question?” Some 62 local leagues around the state are doing outreach to distribute “solid materials that people who are sort of out there at farmers’ markets or in community meetings can grab and reference any time.”

As he watches the shift in the polls against a recall, Escobedo argues that it started when the opposition campaign pivoted in early August to invest resources to speak to a broader electorate. “We need to have these voices included. We need to educate and engage.”

“You began to see ads on Spanish language radio. You began to see more coverage about the election, The L.A. County registrar’s [of voters] office launches a million-dollar investment in ethnic media. They’re educating people about ballots.”

The more recent polls reflect that more people are engaged, he says. “I think that’s what’s changing the landscape around the election.”

10 Ways the Recall of Gov. Gavin Newsom Would Change California