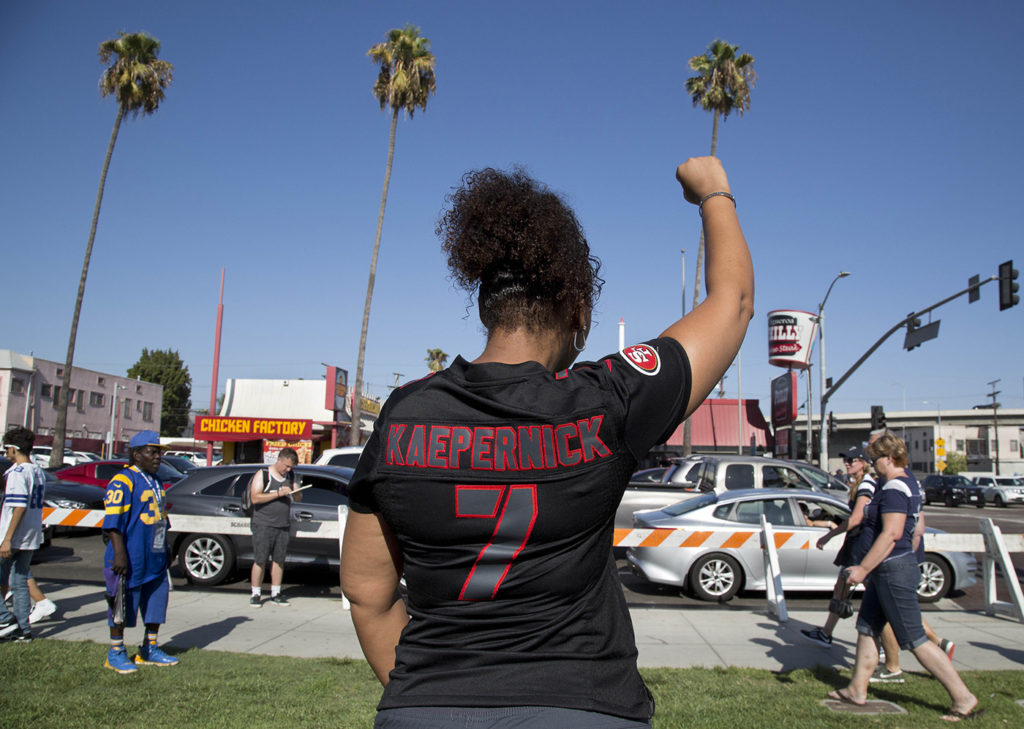 Erica, 49, at a protest in support of Colin Kaepernick outside the L.A. Coliseum. All photos by Steve Appleford.

As thousands of football fans poured into the Los Angeles Memorial Coliseum for a pre-season contest Saturday, a small group of demonstrators greeted them with a message: Colin Kaepernick was being denied a job in the NFL as punishment for his refusal to stand during the national anthem last season – his protest against an alarming wave of police shootings of unarmed African Americans.

About three dozen protesters gathered at the entrance to the park, where the L.A. Rams were battling the Dallas Cowboys. They held signs that read: “Boycott the NFL” and “I stand with Kaepernick! Charge police with crimes against black people and justice systems.”

Leading the demonstration was longtime L.A. activist Najee Ali, who said the former 49ers quarterback “is being punished for exercising his First Amendment rights.” Almost exactly a year ago, Kaepernick began quietly protesting an increasing number of police shootings across the country by first sitting, then kneeling, during the “Star-Spangled Banner.”

Kaepernick’s solemn, season-long ritual became one of the most covered controversies in American sports in 2016, drawing support and intense criticism for the young quarterback. Now a free agent, he’s so far been unable to land a new position on a team.

“It was inspiring that he would use his platform as an NFL star to raise awareness to the fact that black and brown people were being murdered in the streets – sometimes on videotape, and yet the police always seemed to not be convicted,” said Ali. “So it was frustrating, but he gave hope that people who are influential do care about us.”

The Los Angeles protest was among the first of a series of demonstrations planned across the country. Director Spike Lee has announced a rally for the quarterback Aug. 23 in front of NFL headquarters in New York. And in September, a group called “Standing for Kaepernick” promised to host protests at the first regular season game at each NFL stadium. 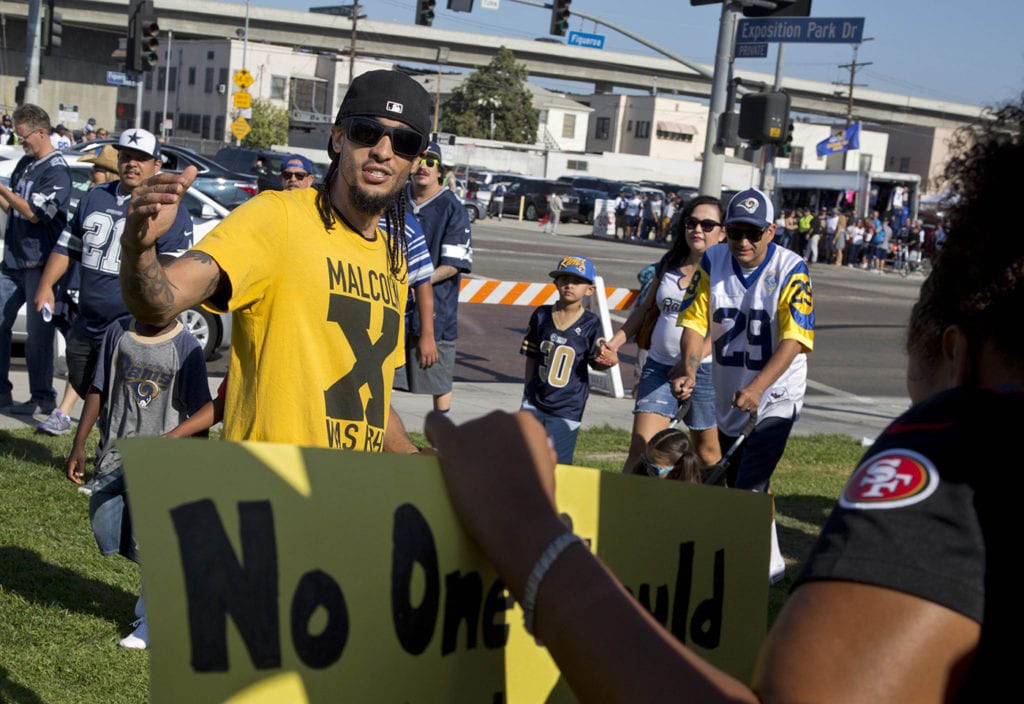 Samerai the 7th, a rapper and writer, at a protest in support of Colin Kaepernick outside the L.A. Coliseum.

Ali said the protest was directed at the entire National Football League, not any particular team, questioning why the quarterback remains jobless while lesser players have been signed. (In San Francisco on Saturday, Raiders running back Marshawn Lynch joined a handful of other players in the league in aligning himself with Kaepernick by sitting during the national anthem. And the NFL Players Association just last week offered to assist Kaepernick.)

“His stats are better than half the quarterbacks in the league,” said one protester, Samerai the 7th, a rapper and writer in sunglasses and a T-shirt reading “Malcolm X was right.”  He called the NFL “the good old boys league,” which he compared unfavorably to the NBA, “the most progressive league in the world.”

Also protesting was a Native American actor named Courage, 28, who wore feathers in his hair. Admitting he didn’t follow football, he saw similarities between the risks of political speech in sports and in the entertainment industry.

“This protest really hit home for me because as an actor, it’s really dangerous being political, especially as an aspiring actor,” said Courage. “Seeing a talented football player like Colin Kaepernick being forced to choose between his dreams and what he stands for, that’s something I think about a lot. It’s easy to get blacklisted for being political in Hollywood. Its easy to be punished for standing up for what you believe in.”

Following a few more pre-season games, the 2017 NFL season begins for real in L.A. September 10 at the Coliseum in a game against the Indianapolis Colts. If Kaepernick is still not signed to a team by then, Ali expects to be back at the stadium gates.

“We’re hopeful that this movement will catch on nationwide,” said Ali, “and draw attention and awareness that we must defend Kaepernick’s constitutional rights.” 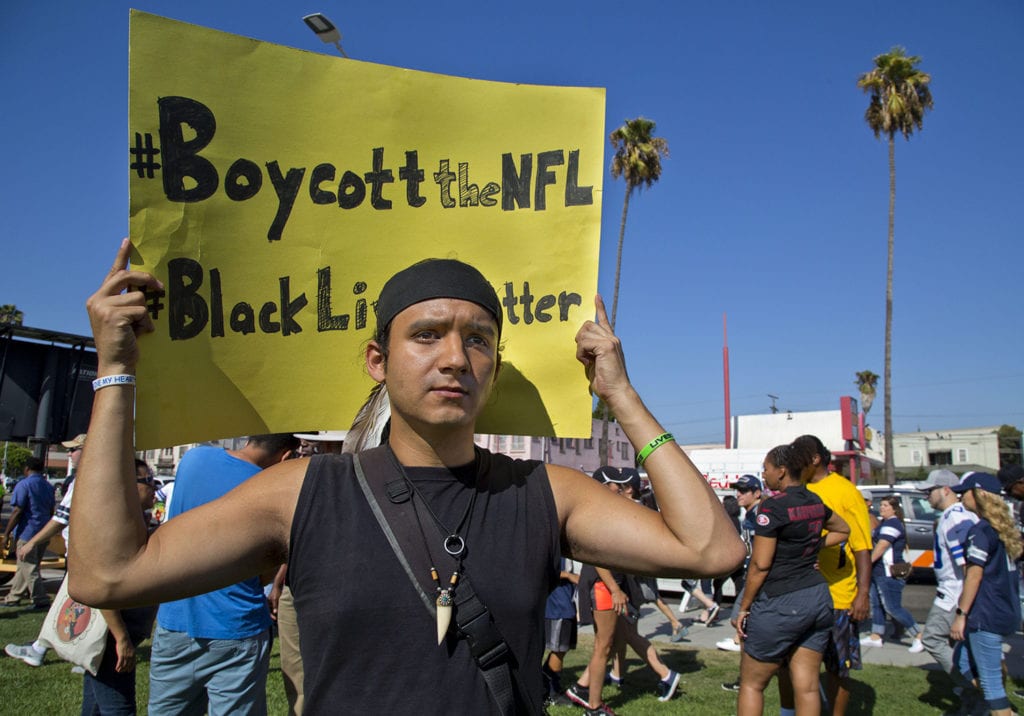 New Documentary Gives Voice to the Protesters of Ferguson