Thursday’s community meeting in the auditorium of Boyle Heights’ Lorena Street Elementary School was ostensibly a Los Angeles Unified School District briefing on why the school was about to share half of its classrooms and campus resources with a charter school.

The players were right out of Central Casting. To one side of Lorena Elementary’s podium stood LAUSD principal Enrique Soberanes — a rumpled, embattled Jaime Escalante-esque embodiment of an inner-city public school educator.

Opposite Soberanes, standing tall and lean and tanned was the impeccably tailored Dr. Jim Kennedy, looking more  a William Morris Endeavor agent than the incoming principal of Walton Family Foundation-backed Extera Public School No. 2, the new K-1 charter school being imposed on Lorena Street as a co-locator.

Facing the principals were roughly 75 bewildered, mostly Spanish-speaking and working class parents, their children and a score of frustrated and angry LAUSD teachers. At issue was why those with the most at stake in Lorena Elementary had seemingly been cut out of the co-location planning loop. 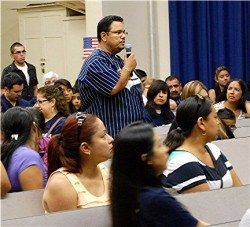 Co-location is the name given to housing a charter school side by side with a traditional public school in the same school building as spelled out by Proposition 39, the school funding measure passed by California voters in 2000. Such arrangements were mandated by language that amended California’s Education Code to compel school districts to provide “reasonably equivalent” facilities to accommodate all of the charter school students who would otherwise attend district schools.

In the normal course of the regulatory timeline for co-location, Lorena Elementary’s teachers and administrators would have been alerted that their school was being considered for co-location as far back as February 1.

In this instance, however, the announcement didn’t come until July 10, giving Soberanes a mere three weeks to hammer out a shared-use agreement with Extera before the charter moved in July 29. That left virtually no time to include the input of parents or Lorena Elementary’s veteran teachers in such matters as scheduling and the sharing of school resources.

According to LAUSD’s Director of Community Relations Lorena Padilla-Melendez, who led the meeting, the lateness of the announcement resulted from Extera’s rejection of LAUSD’s initial offer of South Central’s Wadsworth Avenue Elementary School, which in turn triggered a Prop 39 Dispute Resolution Process. One glaring consequence of that process, however, was the circumvention of community and teacher involvement in the process.

To say that the attendees were skeptical of Extera would be an understatement. When told that Extera’s co-location was a lawful fait accompli, one mother compared co-location to marijuana dispensaries, saying, “Just because it’s legal doesn’t mean it’s right.” The comment drew an enthusiastic ovation.

But dispute resolution also allowed Extera to, in effect, cherry-pick a school in the far more desirable neighborhood of Boyle Heights — what the regulatory language calls Extera’s “area of geographic interest.”

For Boyle Heights native and LAUSD teacher Eddie Rivas, both the divisiveness of the meeting and the division of Lorena Elementary tied directly to the gentrification that has been dividing Boyle Heights and making it a hot prospect for development.

And now they’ve got divided schools. 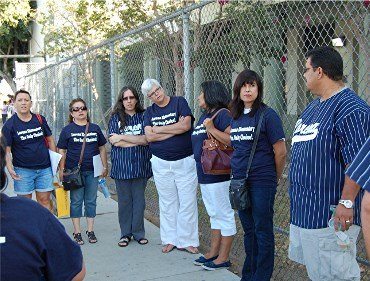 (All photos by Bill Raden.)