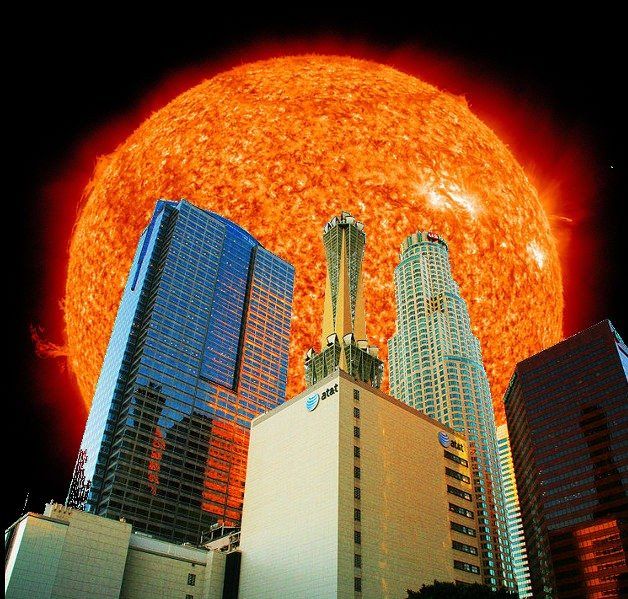 Last month my wife Susan and I drove to Phoenix to visit family. We had never spent much time there, and my relatives wanted us to see some sites they thought would interest us. They took us to two places where an ancient people had lived for about a thousand years, reaching their height of power and size between about 950 and 1350 C.E.

This society built water canal systems that, anthropologists estimate, ran for a thousand miles. From what is now downtown Phoenix they took water from the Salt River and distributed it for farming across the local valley. Further south another group did the same on the Gila River. The main channels can be up to 30 feet across and 10 feet deep, all dug by hand, and so well engineered that water planners use some of the same routes today.

Economist: To sustain the human economy as a whole would require 1.5 Earths.

To coordinate this system they built a network of some 40 “platform houses” — raised multistory buildings that may possibly have been used as signal towers. Some of these sites apparently included structures used to record astronomical positions and to mark the solstices and equinoxes. It’s quite possible these observations of sun and stars were used to set the calendar for planting and harvesting.

At their peak, these civilizations may have supported upwards of 40,000 people. Then around 1450 they disappeared. The people moved away, the villages dissolved, the signs of its civilization and its elaborate waterworks abandoned.

For years this collapse posed a mystery to anthropologists, but now they think it may have been caused by a deadly combination of overpopulation and drought.

People who deny that humans are causing civilization-threatening climate change like to point to instances like these as signs that weather-based collapse is a normal, common meteorological phenomenon. From time to time ice ages and their retreats, volcanic eruptions and the debris they spew dramatically alter the habitability of major swaths of the Earth. “These things have happened before,” as friends have reminded me.

But not like what we’re seeing today. Even the fossil fuel companies – such as ExxonMobil – have known for years that the use of their products changes the climate. ExxonMobil analyzed the impact in internal documents, even as the company spent some $30 million over several years to declare human-caused climate change a “premise that…defies common sense,” as one former ExxonMobil chairman and CEO put it. Outside, they were paying PR firms to confuse people; inside, the company was making engineering decisions based on the real results of their products. For example, they adjusted the measurements of off-shore drilling platforms to account for rising sea levels.

Apparently the ancient people who lived in the Salt and Gila river valleys did not have the perspective to know what was happening to them. But eventually the water no longer supported the crops needed to support their population. The system had become too successful, and now drought was taking its toll. People went to other places.

Unfortunately, Pope Francis’  encyclical concerning the Earth fails to address this matter of overpopulation. The pope sees food redistribution as an important challenge to population growth. And yes, it is true that the world throws away about one-third of its food. And yes, it is true that what the wealthiest half-billion of us use could feed everyone on the planet who is here now. But fixing maldistribution does not speak to the carrying capacity of the Earth herself.

Yoshihiko Wada, a Japanese professor of economics, compares the ecological footprint (the land and resources that a select population uses to exist) with what he calls the Earth’s “biocapacity” (what the planet can supply to keep all humans alive). We are in a serious deficit. He says that to sustain the human economy as a whole would take 1.5 Earths. To sustain human life at the level of Japan requires 2.3 planets. We are running an “ecological deficit,” as he puts it. The Earth cannot sustain this many people, not only because of the way we have divided up stuff, but because the Earth cannot keep us all going.

Fortunately, some nations are aware of the intertwining of population and the goods people need to survive. So far 11 national governments, mostly but not all in the developed world, have set a limited ecological footprint as one of their official “sustainability indicators.” Other international organizations, such as the European Union and the Association of Southeast Asian Nations, are also studying how to implement such a policy option.

If there is a lesson from visiting the homelands of the ancient people of the Salt and Gila river valleys, it is this: We ignore the interwoven connection between population growth and climate change at our peril. We cannot continue to damage the Earth and expect human life to go on just the way it has.

Related Topics:Climate ChangeDroughtPope Francis
Up Next