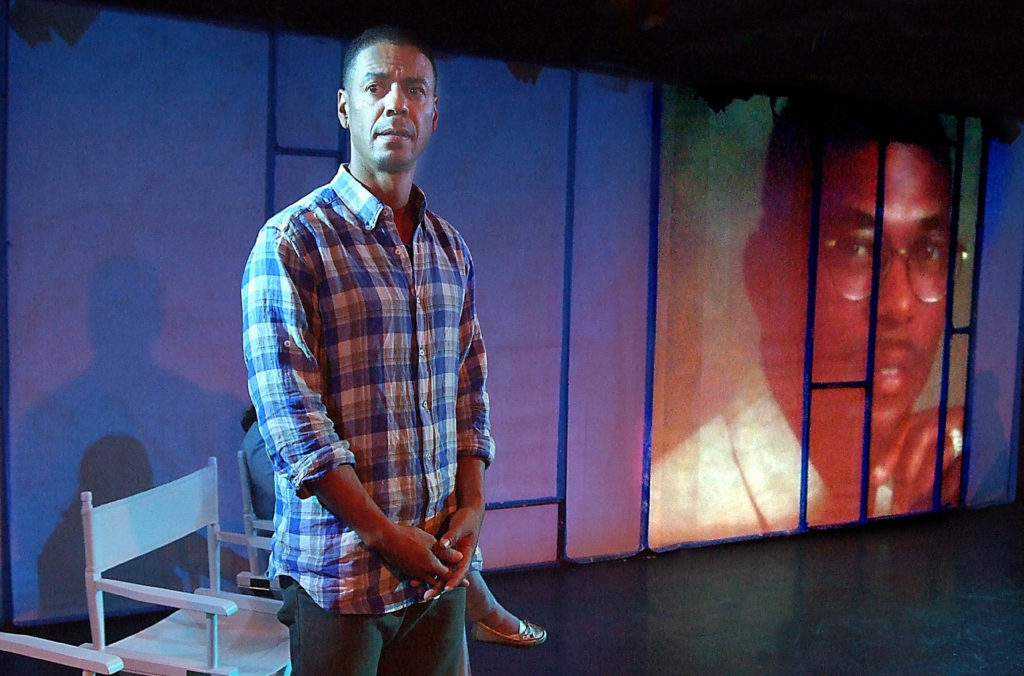 One could make the argument that Citizen: An American Lyric, Stephen Sach’s adaptation of Claudia Rankine’s celebrated meditation on race in America currently playing at the Fountain Theatre, could not be better timed. After all, at the same time America unites in its outrage over a lion murdered in Africa, the country is engaged in a hotly divided debate over a string of incidents where police have gunned down African Americans in the concrete jungles here at home. But such a supposition would be missing one of the most important points of Rankine’s work (the book was a finalist for a National Book Award). Because, to believe that somehow that there is some unusual collision of time and circumstance that has engendered the recent slew of acts of racism is to deny the fact that these incidents happen and have been happening—whether by switch, or rope, or bullet—regularly for centuries.

But unlike recent headlines, Rankine and Citizen’s focus are on the “micro-aggressions,” as the author calls them, the daily instances of racism committed through speech and action that go largely unnoticed by the perpetrators, but are, as playwright Sachs says, “subtle, insidious and soul-crushing” to those who encounter them every day. These tiny cuts multiply, fostering festering wounds that bleed and scar, and make up the foundation of Citizen’s 70 minutes, which speed by like a “loco-motif” of race and relevance.

We watch as a Caucasian driver (Tony Maggio) turns to his African-American co-worker (Bernard K. Addison) and says blindly unaware,  “My Dean is making me hire a person of color when there are so many great writers out there.”

In another, Rankine’s neighbor calls the police on a black man (Leith Burke) walking back and forth talking to himself outside the author’s house. It takes four police cars to figure out that it’s her friend on a Bluetooth business call.

These carefully choreographed every day moments only last for a beat or two, and go from the absurd (“I didn’t know black people could get cancer”) to the celebrity (Serena Williams accused of “cripwalking” on center court of the All-England Club) to the subtle (a friend at work calls her African American colleague by the name of the only other black person in the office), but they resonate long after the stage is struck. 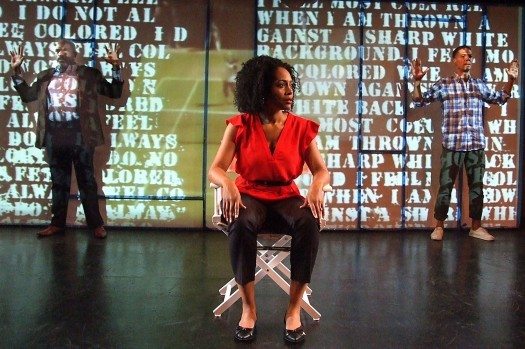 Mixed-media experimentation in theater, with its potential to profoundly mix movement and music, flesh and images, lighting and voices, is a difficult and delicate but not impossible task. Often it comes across as pretentious at best, and insufferable at worst. Sachs’ well-crafted distillation of Rankine’s work, however, is brought to life in the confident hands of director Shirley Jo Finney and her trusting cast (standouts include Tina Lifford and Simone Missick), and Citizen as a result is both sensitive and powerful and rarely misfires.

Near the end of the play, the backdrop displays the images of African Americans recently killed by police as the cast reads out “In memory of Trayvon Martin…In memory of Michael Brown…” and so on. It is the most overt moment of the play and albeit moving, it’s a bit simplistic, somehow diminishing the individual stories of each victim.  The moment, however, is punctuated with perhaps Rankine’s most powerful line in of the whole piece: “Because white men can’t police their imagination, black men are dying.”

The real star here is Rankine’s writing, with every line seeming to resonate. In the last line of the play (and the book), an African-American woman is telling her friend about a subtle incident of racism at her tennis club. Her friend asks her, “Did you win?” The woman answers: “It wasn’t a match, it was a lesson.”