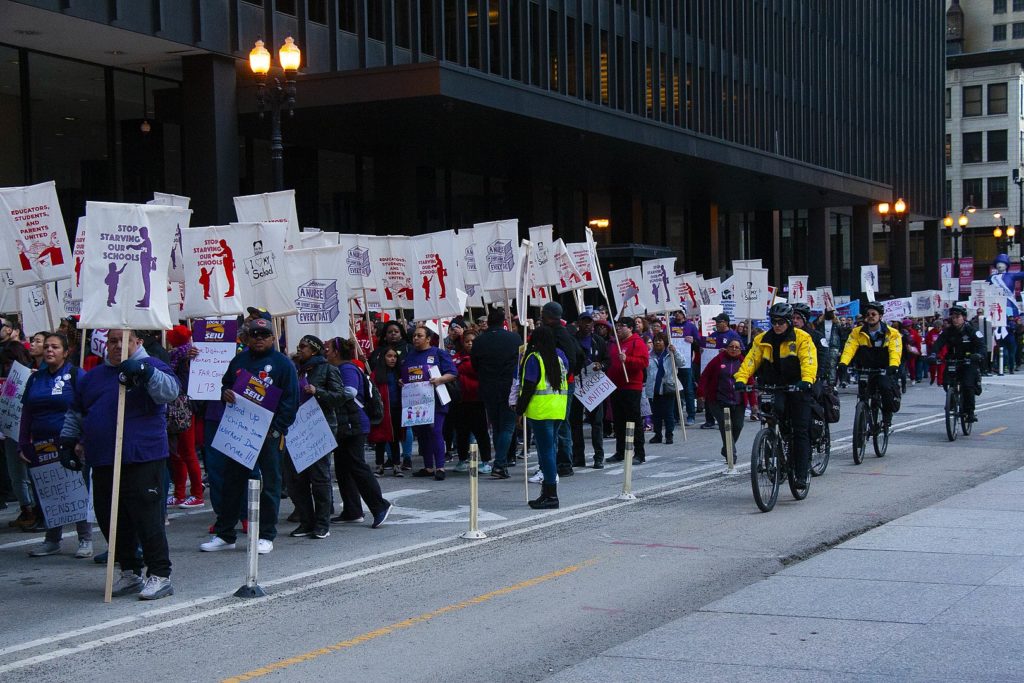 In what is being heralded as the latest win for social-justice unionism, Chicago teachers will be back in classrooms on Friday, ending a bitter 11-day strike. A tentative agreement reached late Wednesday includes a 16 percent pay raise over the next five years and millions of dollars more for class-size reduction and the hiring of hundreds of school social workers, nurses and librarians. The deal must still be ratified by Chicago Teachers Union rank-and-file members. “No educator wants to leave their classroom, but our struggle was the only option we had to enshrine, ensure and enforce real change for our students and school communities,” CTU President Jesse Sharkey said in a statement on Wednesday.

Following the strategy pioneered by CTU during the 2012 teachers walkout, the union framed its fight as a struggle against the gross inequities between rich and poor families in a city whose economic development policies too often come at the expense of low-income communities and public school children. That point had been hammered home in the closing days of the deadlock when teachers rallied at the Lincoln Yards megadevelopment on the city’s upscale North Side to demand a renegotiation of the project’s Tax Increment Financing (TIF) agreement, one of many engineered by former Mayor Rahm Emanuel. The Lincoln Yards deal alone will cost Chicago Public Schools $1.3 billion of the 53-acre luxury mini-metropolis’ property taxes over the next 23 years, which will be kicked back to the developer in the form of infrastructure improvements at the site.

Good news for drinkers of the libertarian Kool-Aid served by a certain cabinet-level billionaire at the Trump Department of Education: The effects of the beverage appear to be short-term. Or at least that’s one surmise from the ideological about-face last week by Betsy DeVos underling A. Wayne Johnson, a chief executive in the department’s trillion-dollar federal student aid operations, who upon turning in his Ed Department time card to run for an open Georgia senate seat in 2020 declared the country’s student loan system to be “fundamentally broken.” Johnson’s platform? Student debt forgiveness. He proposes forgiving the first $50,000 in student debt regardless of income — a position that places the Republican just to the left of Elizabeth Warren on debt forgiveness. However, it puts him on the opposite side of the planet from his ex-boss, who only days earlier had ridiculed Dem proposals to forgive the $1.5 trillion national student loan debt as “crazy.”

DeVos’ refusal to stop collecting loans from students defrauded by defunct for-profit Corinthian Colleges just earned her a $100,000 contempt of court citation. And both she and Johnson are on a list of Ed Dept. officials the House Education and Labor Committee wants to grill over their role in illegally okaying $10.7 million in federal loans and grants to students at the unaccredited Illinois Institute of Art and the Art Institute of Colorado — and then shielding the schools’ predatory, faith-based corporate parent Dream Center Education Holdings from prosecution over lying to students about the lack of accreditation.

Somewhere to the right of Johnson on higher ed affordability is California’s self-described “dogmatic fiscal conservative” governor. College access advocates were disappointed this year by Gavin Newsom’s failure to back a sweeping plan by the California Student Aid Commission to remove caps on the number of Cal Grants and to expand the grants beyond tuition to cover living and study expenses, which in California remain daunting barriers to degree attainment. Newsom should be cheered, however, by Making Room for Success, a new report from the nonpartisan College Futures Foundation (CFF) on how to crack California’s public college capacity crisis on the cheap. Rather than capital-intensive solutions, like creating new UC and CSU campuses, CFF proposes creating room for 100,000 more students within existing campuses by making them more efficient at graduating students faster.

Newsom has already set some of those efficiencies into motion by placing a down payment on an integrated educational data system and by reconstituting the California Postsecondary Education Commission (CPEC) to ramp up and monitor degree completion rates. However, in an essay last week in Inside Higher Ed, columnist John Warner raised an alarm over what he fears is the danger posed by Big Data-harvesting and the potential harm to students of the system’s algorithm-driven interventions. The power of the algorithmic tools “to turn student behaviors toward outcomes the institution believes worthwhile,” rather than what might be best for the student, constitutes what Warner calls a betrayal of the student’s individual rights and freedoms to the needs of the institution and the profits of its Silicon Valley contractors.