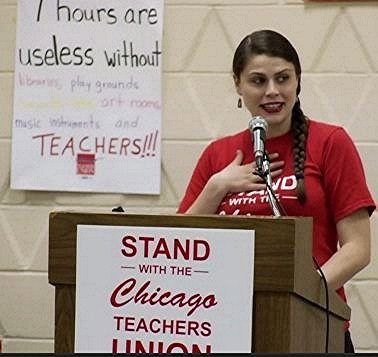 In September, 25,000 Members of the Chicago Teachers Union (CTU) stood strong on picket lines and flooded the streets of downtown Chicago in rallies, refusing to return to work until the school district and Mayor Rahm Emanuel came closer to their idea of fair in contract negotiations.

They prevailed. The teachers defeated merit pay, forced the district to hire 600 teachers and took care of laid-off workers. In doing so, they showed that teachers’ unions will not lie down, even as privatization encroaches. The teachers and unions also experienced an outpouring of support from activists and the general public.

How did CTU pull it off? What lessons are there to learn from the victory in Chicago?

A recent forum asked how CTU transformed its union in order to draw lessons for the future from the successful campaign. The forum was documented on video (posted above). Featured speakers are:

In the forum, Ms. Hampton goes over how the initial stages of the campaign involved attending budget meetings and holding a rally at a downtown Hyatt to determine the whereabouts of tax dollars that could fill the Chicago School District’s budget shortfall.

Jesse Sharkey, the Vice President of the Chicago Teachers Union says that the strike, “Put the voices of parents teachers and community members back on the map in fighting for quality schools.”

He goes on to describe the feeling of empowerment in the midst of the strike:

We picketed with 20,000 a day, marched with 25,000 … it wasn’t just about winning a contract, it was about building the forces on our side … everywhere you looked there was a sea of supporters.

Sharkey states that the union’s next battle will be to fight over proposed school closings that will be concentrated in the city’s poorest neighborhoods, calling it a “deeply racist program.”

Sarah Chambers speaks about CTU’s 100 percent attendance rate during the strike as the culmination of a long effort to build solidarity among the rank and file — solidarity that was built during the lead up to the 98 percent strike authorization vote.

Professor Ashby contrasts CTU’s ability to show up in the tens of thousands everyday, all day for rallies and pickets, with the “lawn chair” strikes of the 1980s. He states that pickets used to last two hours, then strikers would eat breakfast and go home.

Not in Chicago. Anything short of the full commitment that stemmed from coalition building would have meant failure. The union built support and worked toward a solution for the better part of a year, and turnout for rallies was much greater than expected as a result.

The forum is essential viewing for organizers planning or involved in campaigns, actions or strikes, and anyone curious as to how CTU won an improbable — and definitive — victory.

Matthew McDermott is a Unionosity editorial assistant and outreach coordinator. His post is republished with permission.

Raising the Minimum Wage Is the Least We Can Do