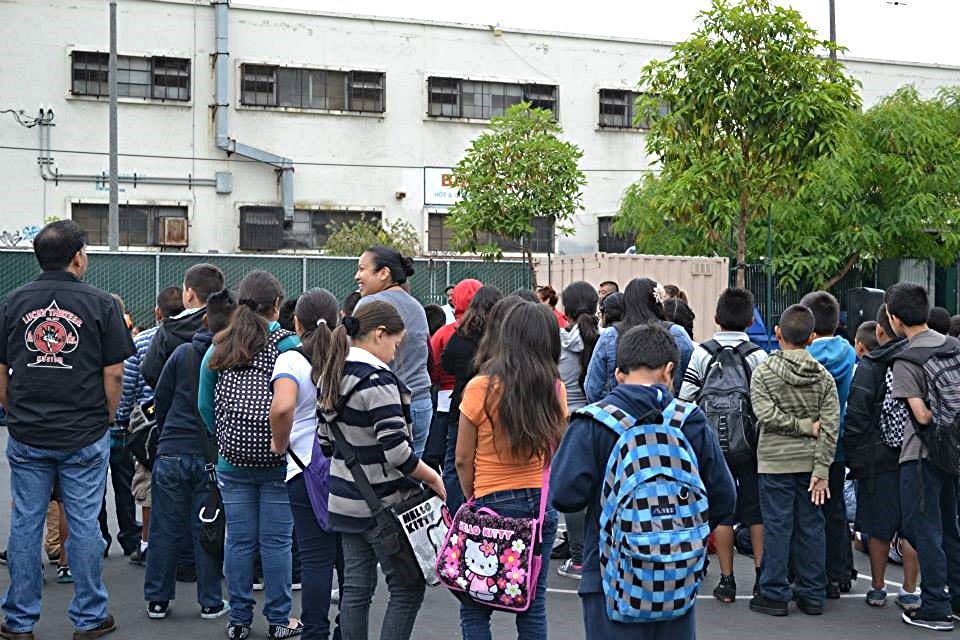 School suspensions are out, restorative justice is in. At least that’s the case at the Los Angeles Unified School District and wherever schools are struggling to shift from the harsh, zero-tolerance discipline of the past to a less punitive, problem-solving approach. Restorative justice de-emphasizes punishment and instead aims to repair the damage that is done when, for example, a child disrespects a teacher, or a student starts a fight. The goal is to have misbehaving students think about their negative behavior and hear directly from the person that they hurt—often in what’s known as a harm circle — about how they were affected and what can be done to fix the situation and the relationship.

22 L.A. charters — nearly all of them in high- poverty neighborhoods –accounted for 42% of the charter schools’ nearly 3,700 suspensions last year.

The shift comes 20 years after the fatal shootings at Columbine High School in Colorado, after which many schools turned to “no excuses” discipline policies to stem violence. While such policies haven’t stopped school shootings, they have been profoundly damaging to some students – particularly African-Americans and those with disabilities. According to researchers at the University of California and elsewhere, students from these two groups have been suspended at far higher rates, with consequences that can last a lifetime – making school discipline a civil rights issue. 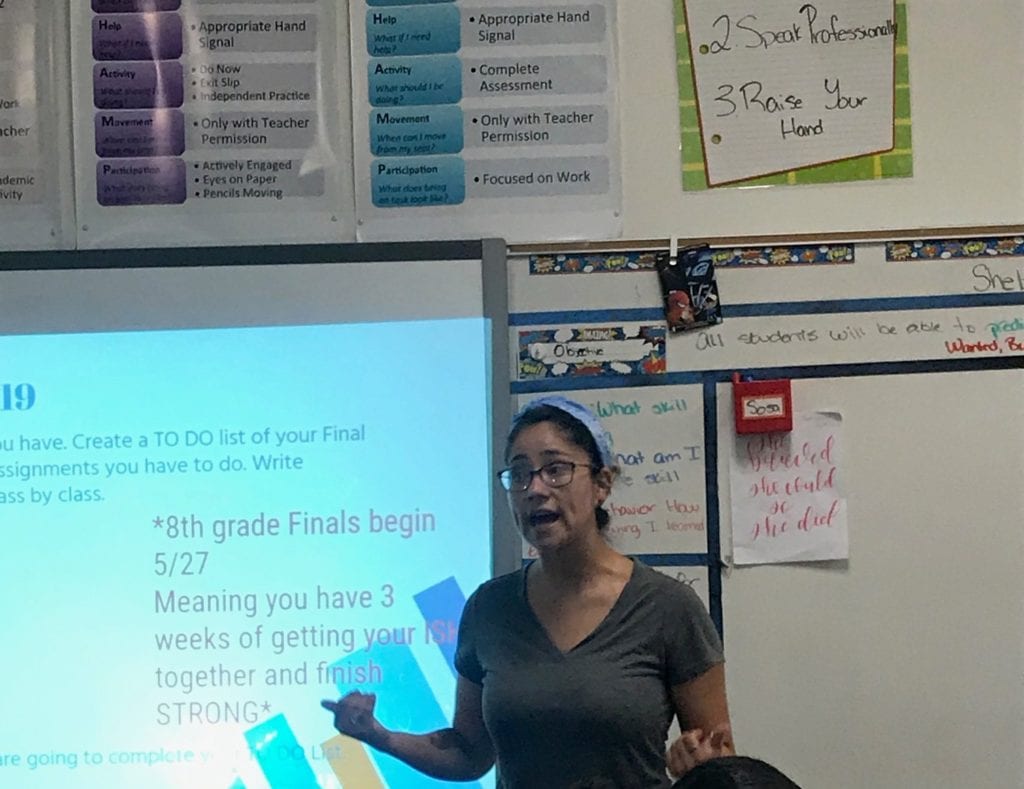 Under pressure from education activists and federal civil rights officials, LAUSD, the nation’s second-largest school district, has slashed suspensions in its traditional schools.

Crete Academy in South Los Angeles, an elementary school serving homeless students, suspended about one in 10 of its students last year.

Most Los Angeles charter schools have also curbed suspensions, but they have been slower to let go of the practice entirely, and a handful still send students home at sky-high rates.

Charter schools, which enrolled more than 110,000 LAUSD pupils in 2017-18, suspended them at about twice the rate of traditional schools in the district. Twenty-two L.A. charters — nearly all of them in high-poverty neighborhoods –accounted for 42 percent of the charter schools’ nearly 3,700 suspensions last year. Specifically, charters suspended students with disabilities at nearly four times the rate of traditional schools, while African-American students were suspended at almost three times the rate they were on non-charter campuses.

Hattie Mitchell, who founded the school in 2017, makes no apologies for the high rates. “Teachers hate restorative justice,” Mitchell said, arguing the policy removes consequences for bad behavior. “That sends a signal – you can cuss the teacher out, you can throw a chair.” Mitchell, who is a former teacher and charter school dean, claimed that “there are real consequences” for behavior like that occurring outside of school, especially for young black males.

“I would hate to have someone go out in the real world and learn the hard way,” she said.

Still, Mitchell said, sending a kid home is a last resort. She acknowledges research shows suspensions aren’t beneficial because they don’t “teach them anything about their behavior.”

“Willful defiance” suspensions have been found to be among those that have been meted out more disproportionately than other types to black and disabled students.

She added that she’s not sending suspended students onto the street: If families have no roof over their heads when they enroll, Mitchell said, she arranges for housing before their children start classes. She does try to get to the issues underlying disruptive behavior, but said other children deserve “a calm and supportive learning environment.”

Both charters and traditional public schools, however, have cut down on suspensions for “willful defiance,” which have been found to be among those that have been meted out more disproportionately than other types to black and disabled students. (The behavior can include anything from talking back to teachers to refusing to remove a baseball cap in class.)

Green Dot Public Schools is one of LAUSD’s largest charter management organizations, whose administrators have embraced restorative justice as an alternative to suspensions. Nine of its 18 LAUSD schools are among the 20 highest-suspending in the district. Green Dot’s Ánimo Phillis Wheatley Middle School, located in South L.A.’s West Athens neighborhood, issued more suspensions than any other school in the LAUSD. One in five Wheatley students was suspended in 2017-18, and the school’s African-American and disabled-student suspension rates illustrate how disproportionately the punishment can be applied. The school suspended more than a third of its African-American students and about 30 percent of its students with disabilities.

LAUSD regulators have demanded that nine Green Dot schools explain what they are doing to lower  suspension rates.

Still, Green Dot officials say they are confident the number of suspensions is declining because of restorative practices.

During one recent lunchtime, several hundred students streamed into the yard of Green Dot’s Ánimo James B. Taylor Middle School, gathering in small groups to eat at picnic tables or to shoot hoops. It was Pajama Day, when kids were allowed to switch their uniforms for sleepwear. One kid dressed in a rainbow-colored unicorn suit complete with a fuzzy horn, but most of the students still wore regulation khaki pants and black tops.

Assistant principal Tiana Diggs said that when she started teaching here four years ago, discipline “was black and white,” meaning that students who broke rules took the consequences. There are still consequences for bad behavior, but the entire approach has changed. For instance, kids will come up to her on the playground, and say, “Ms. Diggs, I need to have a circle. I’m having an issue with this kid.” A kid can request a harm circle at any time to diffuse tensions before they escalate. “We have peer mediators who will mediate so there isn’t this big blow-up, so there is not a fight,” Diggs explained. 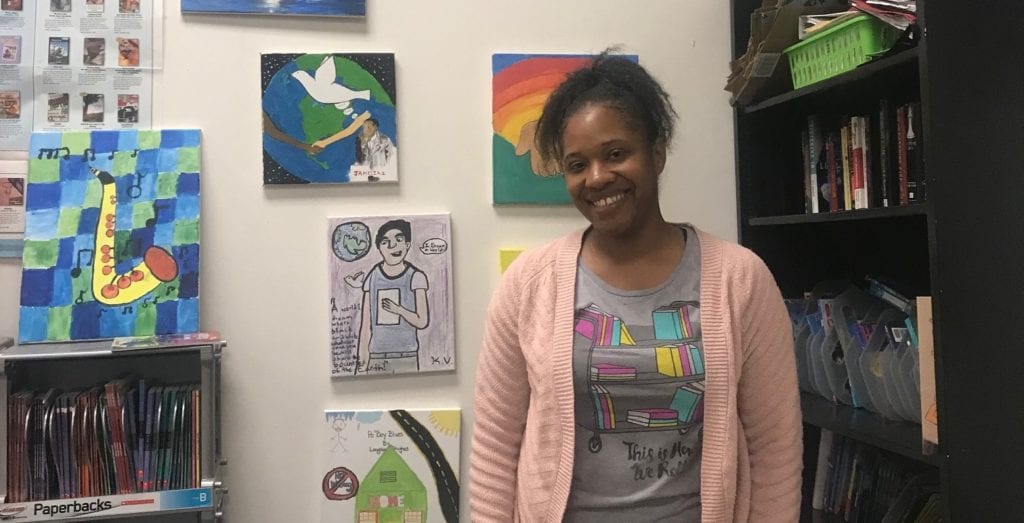 School staff went through extensive weekly training in restorative justice techniques last year, said sixth-grade English teacher Krystle Braxton. “I’m a strict teacher,” Braxton said. But, she added, “I wasn’t letting myself open up to students.” That’s changed now, she said, and so have her relationships with her students. Now, she said, “they’re not doing [their work] because they’re scared of me. It’s a mutual respect.”

The Charter Schools Development Center advocacy group wants charters to maintain their autonomy when it comes to suspensions.

Administrators expect this year’s suspension rates to be sharply lower than last year’s nearly nine percent rate, which the California Department of Education considers high. Taylor Middle School reported that it hasn’t suspended a single African-American student this year, in contrast to 2017-2018, when nearly 27 percent of the school’s black students were suspended.

In Sacramento, the Charter Schools Development Center, a charter school advocacy group, wants charters to maintain their autonomy when it comes to suspensions. “We don’t think the legislature should be in the business of writing lengthy lists of what can and cannot be grounds for suspension or expulsion,” said Eric Premack, the group’s executive director. “We think it should be left to the local schools.” Premack’s group is pressing lawmakers to vote down a bill that includes charters in a statewide ban of suspensions for willful defiance.

High charter-school suspension rates, however, have caught the attention of LAUSD regulators. The district’s charter schools division has issued “notices to cure” to Crete and “notices of concern” or “notices to cure” to nine Green Dot schools, demanding they explain what they are doing to lower suspension rates. The school board can take into account high suspension rates when it considers whether to renew a charter. But it rarely closes schools down for any reason and generally allows charters the autonomy to operate as they see fit.

Last year the board declined to renew five of 59 charters, although none of these decisions were due to the charters’ disciplinary policies. Charter schools may be slower to enact discipline reforms because they have not felt as much pressure as the L.A. school district did when, in 2011, the federal Department of Education found that LAUSD’s African-American students were denied access to an equal education because, among other reasons, they accounted for more than a quarter of the district’s suspensions, even though they made up just under 10 percent of the student population.

The district entered into an agreement with the government to resolve that concern and several others related to equal educational opportunity. It officially moved away from punitive discipline in 2013, and now suspensions are all but taboo, except when they’re required under the state education code for serious offenses. Senate Bill 419, introduced by State Sen. Nancy Skinner (D-Berkeley), might curb some charter suspensions – it would extend the state’s current ban on willful defiance suspensions from kindergarten through third grade, to kindergarten through 12th grade, and would include charter schools in the ban.

The current suspension ban does not apply to charters. Gov. Jerry Brown vetoed a nearly identical bill last year. This year’s bill has won the support of more than two dozen civil rights and youth advocacy groups. The powerful California Charter Schools Association has not weighed in on the legislation, and the Charter Schools Development Center remains the bill’s lone opponent.