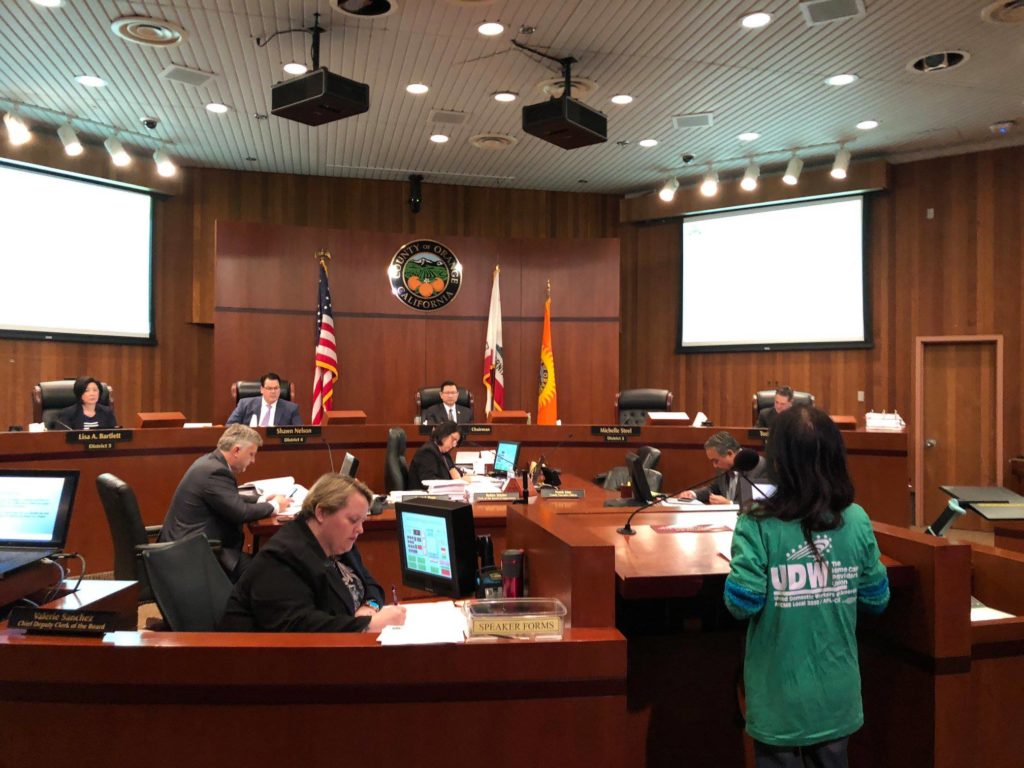 A union home care worker addresses the Orange County Board of Supervisors.

This spring the Supreme Court is likely to deal the U.S. labor movement a crushing blow if, as expected, it rules in Janus v. AFSCME that public employees who choose not to join unions no longer have to pay service fees for union representation.

For the political right, the case is a dream come true because weakened unions would mean a weaker Democratic Party, which relies on organized labor for campaign money and boots on the ground to get out the vote.

If plaintiff Mark Janus prevails, deep-pocketed conservative groups—funded by the likes of the Koch brothers— have announced they’ll wage war for the hearts and minds of public employees in an attempt to separate them from their unions.

The fight is already on in Orange County, where the right-to-work group Freedom Foundation, based in Washington state, scored a win last January in a battle over orientations for new in-home health care aides.

Because of this, new workers are being explicitly told they can leave the room during optional union presentations at job orientations. Because home-care workers don’t have a central work place, union officials say these presentations are one of the union’s only opportunities to sign them up as members.

The United Domestic Workers, which represents home-care workers in Orange County,  argues this new practice discourages membership among public sector employees — in violation of a California law that took effect this year.  (Disclosure: The union is a financial supporter of this website.)  What’s more, union officials contend the county illegally sidestepped its obligation to meet and confer with them over the new orientation policy, claiming that the union contract specifies that a labor-management committee is to plan such orientations.

In-home health care workers, who provide support for low-income elderly and disabled people, are canaries in the Janus coal mine, since the Supreme Court ruled four years ago, in Harris v. Quinn, that these caregivers couldn’t be compelled to pay union fees if they chose to opt out of membership. Ever since, the Freedom Foundation – in Oregon and Washington, and since last year, in California, has knocked on doors, launched a cable TV ad campaign and a website aimed at convincing home-care workers to quit their union. (Freedom Foundation would not answer questions for this story.)

California law allows unions that represent home-care workers to give 30-minute presentations at new-employee orientations. But last fall, the Freedom Foundation’s Orange County director, Sam Han, objected to the union’s sole access to new employees and began lobbying the supervisors, all of whom are fellow Republicans, to give him five minutes to also address the new recruits. He further argued that the workers should be explicitly told they could leave the room during the union presentation.

In January, the Orange County Board of Supervisors discussed the matter in closed session. County counsel Leon Page said the closed-door consideration was justified because a decision by the supervisors to allow Han into new worker orientations would likely lead to a lawsuit from the UDW.

Page said the supervisors took no official action, but that he alone decided to change the script that guides employee orientations to clearly state that the union presentation was optional and to maintain the county’s neutrality in union matters.

“We are Switzerland,” Page said, contending that the county’s previous approach—of only informing new workers the presentation was optional if they asked—was biased in favor of the union.

Two days later Han declared victory on the Freedom Foundation website. Union officials were incensed that he got word about Page’s action a full week before they did.

The UDW has filed an unfair labor practice charge against the county with the state Public Employee Relations Board. Union attorney Tony Segall said that to his knowledge it’s the first such charge to be filed under the new state law that bars employers from discouraging public employee union membership. He noted the dispute will take on added significance if the court decides against organized labor in the Janus case.

“We’re going to be fighting this battle everywhere,” Segall said.