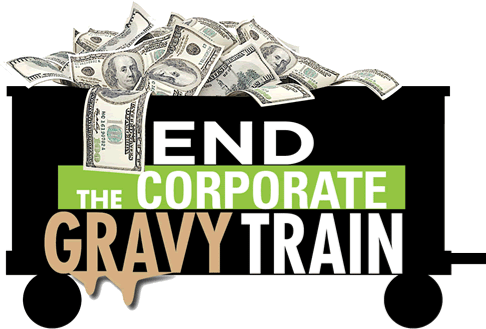 Hundreds of workers descended on the Capitol yesterday as part of the California Labor Federation’s legislative conference lobby day with a simple message for both Democrats and Republicans in office: “End the Corporate Gravy Train.” They were referring to the state’s wasteful enterprise zone program, which takes money away from schools, infrastructure and other valuable services to line the pockets of corporate CEOs at Walmart and other large, profitable corporations.

At a lunchtime rally, workers, labor leaders and elected officials railed against this massive giveaway and urged support for SB 434, a reform bill authored by State Sen. Jerry Hill. The event coincided with the launch of a new website, www.EndTheCorporateGravyTrain.com, which details the wasteful program and exposes some of the massive companies that are riding the gravy train.

“Taxpayers are sending $700 million per year straight into the pockets of corporate executives without seeing good jobs created in return. It’s time for serious reform of the wasteful enterprise zone program. Every single legislator in California needs to understand that either they’re standing on the side of taxpayers who demand our money is spent wisely, or they’re in the pockets of the special interest lobbyists and CEOs riding the corporate gravy train.”

EZs were originally intended to create jobs in economically distressed areas but they have long since deviated from their purpose to become a tax giveaway to the largest corporations in the state. An overwhelming 61 percent of enterprise zone tax breaks were claimed by corporations with over $1 billion in assets, according to the Franchise Tax Board.

Board of Equalization member Betty Yee:

Defying commonsense, the EZ program is a “job creation” tax credit that doesn’t actually require that a single new job be produced. Employers can get tax breaks for simply hiring an employee into an existing position, not growing a new job. To make matters worse, the program encourages unscrupulous companies to eliminate good jobs, pack up and move to another part of the state, and get a fat tax bonus for hiring workers at low wages.

“The enterprise zone program has evolved into a handout for large corporations without creating new jobs. In a survey conducted by the state, nearly half of businesses report that the EZ hiring credit “never” or “rarely” influenced their hiring decisions. The program has shifted away from its mission to help small businesses create jobs in underserved parts of the state, and now nearly all of the tax credits are claimed by corporations with assets of $10 million or more. Corporations with less than $1 million in assets claimed only one percent of Enterprise Zone tax credits.”

The effort to reform the Enterprise Zone program is part of a larger, long-term effort on the part of workers and their unions to fix the tax code so that it reflects the interests of middle-class Californians, not the special interests of corporate CEOs and their lobbyists.

“Our campaign has a simple principle: Every single corporate tax break must be put to the jobs test. Either these tax breaks create good jobs, or we reform or eliminate them. Big corporations have had a free ride on our dime for too long. It’s time to derail the corporate gravy train.”

Visit www.EndTheCorporateGravyTrain.com for more information and opportunities to take action.

(Steve Smith is Director of Communications at the California Labor Federation. His post first appeared on Labor’s Edge and is republished with permission.)

The U.S. Deficit Is Down — So Why Cut Social Security?

America’s Worst Recovery on Record — And Why