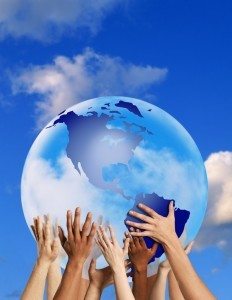 A new economy is coming. While Wall Street banks are on a trend of corporate mergers and acquisitions, Main Street businesses are generating community wealth while undergoing a transition of their own. Traditional companies are becoming worker cooperatives, both to sustain during tough economic times and because years of success have enabled these companies to reward their workers. State and local governments are beginning to get wise to this trend, too, adding legislative influence to an already vibrant movement.

Take the example of Zingerman’s Community of Businesses, an umbrella company that runs a fleet of food service outfits based in Ann Arbor, Michigan. Over the course of more than 30 years, Zingerman’s has become a statewide destination for food lovers, and their owners have become business community luminaries. Nearly 600 employees work in the eight distinct businesses that comprise the Zingerman’s Community, generating annual revenues of $46 million. Inc. magazine once rated Zingerman’s among the coolest companies in the States, and the very same leaders whose vision has been so celebrated are now designing a plan to transition Zingerman’s to an employee-owned worker cooperative. When the transition is complete, Zingerman’s will be among the largest worker co-ops in the United States.

“It’s exciting to see so many of these transitions happening today, and when a relatively large and remarkably successful company like Zingerman’s moves in this direction, it says something powerful about the possibilities of the Next Economy,” says John Abrams of South Mountain Company. Abrams is advising Zingerman’s on its transition, and brings more than 25 years of experience to the Zingerman’s table. In 1987, Abrams was among those who transitioned his workplace, a design/build firm in Massachusetts named South Mountain Company, to a worker-owned cooperative. “Ownership is a very big deal,” he explains, “and when the people who are making the decisions share in both the rewards and the consequences of those decisions, it’s natural that better decisions result.”

Putting decision-making power in the employees’ hands can keep a local economy going in tough times, and create stable jobs that are far less likely to disappear in times of crisis. The high-profile example of Chicago’s Republic Windows & Doors is one such case of a transition born out of conflict and economic strife. In late 2008, Bank of America cancelled the company’s line of credit, driving it into bankruptcy, and the workers were set to be laid off without their due severance pay or other benefits. Days later, the embattled workers occupied the factory and took control of what the bank had threatened to take away. Assisted by many players in the cooperative movement, those same workers who occupied Republic Windows & Doors have since decided to take permanent control of the company and turn it into a cooperative called New Era Windows.

These recent conversions draw from deep roots. Businesses transitioning today enjoy a broad support network of co-ops drawing from decades of experience. Pioneering company conversions include the 25-year-old Collective Copies of western Massachusetts, whose unionized, striking employees pooled their skills and experience to change over the failing and exploitative Gnomon Copies, revitalizing, strengthening, and updating it to a modern, collectively-run print shop.

These historical examples and the current economic climate are convincing municipalities across the country that transitioning to a co-op-focused economy is a good idea. Recently, two dozen city officials met in Reading, Pennsylvania, to discuss boosting the local economy by creating co-ops, and the mayor of Richmond, California, created a co-op development position to advise the city government.

The picture isn’t as rosy elsewhere in the country, however. “You can’t even form a cooperative in every state in the US,” says Melissa Hoover, president of the US Federation of Worker Cooperatives, because “the legal form simply does not exist in some states.” Indeed, even among cooperative enterprises, only one percent are worker-owned.

As one of the five states that offer worker cooperatives an official business identity, Massachusetts leads the way in supporting worker cooperatives. Legislation is currently on the table that would formalize and clarify the transition process for companies looking to become worker-owned. The new laws would require business owners to notify their workers when they intend to sell the company, making it clear to employees that they are eligible to purchase or bid on the company. It would also give the employees the right of first refusal.

Where co-ops don’t already have a foothold, advocacy groups are making strides, including the formative New Orleans Cooperative Development Project, which describes itself as “a community consortium to facilitate the startup and development of worker-owned cooperative businesses in the region.” In the Midwest, the Cincinnati Union Co-op Initiative, pairs United Steelworkers – the largest US-based union – with the Mondragon Cooperative Complex, the largest co-op worker system in the world.

“To survive the boom and bust, bubble-driven economic cycles fueled by Wall Street, we must look for new ways to create and sustain good jobs on Main Street,” Leo Gerard, president of United Steelworkers, told the Nation last year. “Worker-ownership can provide the opportunity to figure out collective alternatives to layoffs, bankruptcies and closings.”

The cooperative movement enjoys growing acceptance in the business community, aided by visionary political leadership that recognizes the value of community resilience. A crucial part of the co-op movement is how it integrates with our communities; each new co-op makes the economy more accountable to the people who live on Main Street, and has the power to change how we will build a new economy.

(David Morgan is a worker-owner at the Toolbox for Education and Social Action, a worker-owned cooperative created to democratize education and the economy while furthering the cooperative movement. His post first appeared on Truthout and is republished with permission.)