A promising start: Overlooking the site of the future Urban Orchard. (All photos courtesy of Trust for Public Land)

Many of us have found respite in parks and other natural spaces during the COVID-19 pandemic. But some people have much easier access than others to these oases.

Low income people of color also face more pollution and resulting health problems, such as asthma. These same communities have also been hit hardest by COVID.

Report: Areas within a 10-minute walk of a park are as much as 6 degrees cooler than areas beyond that distance.

“When you look at the map for areas that have been hit by COVID, it perfectly aligns with the areas that are ‘park poor.’ The maps could be laid one on top of the other, and they are basically identical,” said Robin Mark, Los Angeles program director for the Trust for Public Land, a nonprofit that focuses on expanding access to public parks and protecting land for public use. “There’s a lack of access to places where they can be outside safely to play and recreate and get exercise.”

At a moment when racial inequity is apparent, and when the U.S. is dealing with both racial injustice and the pandemic, the equity of public spaces is important. Inequities in access to public land and natural spaces matter.

Because the pandemic has limited options to recreate safely and may have exacerbated physical and mental health issues, especially for front-line workers and people who have lost loved ones, ease of access to natural spaces may be especially urgent now. Research has shown that spending time in natural spaces improves mental health and physical health by several different measures, including blood pressure, heart rate and incidence of type 2 diabetes.

“We’re dealing with sort of this awful trifecta of crises: We’ve got this climate crisis, where people are experiencing extreme heat and erratic rainfall patterns and flooding; there’s this health crisis with the pandemic; and we have this economic crisis as well,” said Linda Hwang, director of strategy and innovation at the Trust.

New affordable housing near the park is being encouraged to prevent residents being displaced through gentrification.

The Trust and other organizations and municipalities around the country are working to make parks more accessible and more responsive to what their communities need.

One example is the Urban Orchard in South Gate, California. This Trust project is building a 30-acre park along the Los Angeles River and next to the Long Beach Freeway, in an area that encompasses Superfund sites and many industrial facilities. The area has high levels of pollution, asthma and childhood obesity.

The Urban Orchard will be within a 10-minute walk of 2,500 people’s homes. It will include recreational offerings; a working fruit orchard that will distribute fruit to the community, wetlands that will treat stormwater runoff and opportunities for environmental education. It will also connect surrounding communities to each other. Here’s some of what the park will provide.

Recreation and physical activity. The park will include bike and pedestrian trails, outdoor exercise equipment, a playground and picnic areas.

Pollution and climate change mitigation. Wetlands that contain native plants and native fish will collect and filter stormwater that would otherwise go directly into the Los Angeles River untreated. The water that’s captured will also be used for irrigation at the park.

More than 300 trees will be planted, including about 200 fruit trees. Fruit trees are not especially good at sequestering carbon from the air, but other species have been chosen specifically for their ability to do so, including the cork oak, Mark said. These will also create “a tree buffer between the active use area of the site and the 710 Freeway, which is just adjacent,” she said.

The wetlands, trees and native plants installed throughout the park should also lower the temperature at the site, which is a plus because hot temperatures can exacerbate poor air quality. And this extends beyond the park itself. “The Heat Is On” report revealed that areas within a 10-minute walk of a park are as much as 6 degrees cooler than areas beyond that distance.

Urban Orchard: The Proposed Before and After 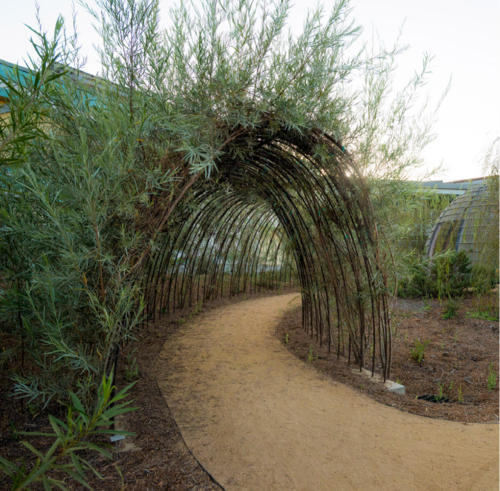 Environmental and cultural education. Signs throughout the park will explain native plants and fish, how the wetlands work, the fruit the orchard grows and local Indigenous Tongva history. The park is designed to accommodate field trips and school buses, and it will include a building that opens onto a plaza and that can be used for education and tours. Murals and a nature-based playground will honor the Tongva.

Job creation. Community members had told planners that jobs are badly needed. The Conservation Corps of Long Beach will provide workforce training and development through an office at the park, and the corps will be able to employ up to 30 youth over time.

Community engagement and ownership. The Trust for Public Land began engaging with the community in 2017 to make sure the park reflected what the community wants and needs, from the fruit the orchard grows to the design elements, including local artists’ work. “If a park feels like the community that currently lives around it, it helps community members feel a sense of ownership—that it’s their park, and it’s not somebody else’s park,” Mark said.

As public spaces where people can gather, such parks can also foster community.

South Gate Mayor Maria Davila said by email, “The community members are excited and looking forward to transform an underutilized piece of land into a destination point.” The orchard will contain wetlands whose native plants will help collect and filter stormwater.

Gentrification concerns. Because economic development sometimes raises concerns about gentrification, the planning process has sought to reduce the risk that residents will be displaced. These efforts include encouraging new affordable housing near the park.

The Urban Orchard is expected to break ground next month and is estimated to be completed by the end of 2022.

Engaging underserved communities and asking people what they want and need out of a public space, rather than what a government official or project funder assumes they want, makes that space as useful as possible.

“We think beyond just the perimeter of the park. We think: How can this holistically support overall community health?”

“A lot of social justice is [built] around how you shift power and how you give people access to decision-making,” the Trust’s Linda Hwang said. “When people are asked for their input, they realize, ‘I have some power here to change what’s happening around me,’” she added.

On March 9, Reps. Joe Neguse (D-Colo.), Nanette Diaz Barragán (D-Calif.) and Michael Turner (R-Ohio) introduced the Parks, Jobs and Equity Act, which would provide a one-time stimulus of $500 million for urban parks. It would fund new or upgraded local parks and create jobs, to help communities recover from the current public health and economic crises.

According to the Trust for Public Land, which supports the bill, 100 million people in the U.S. don’t have a park within a 10-minute walk of where they live. “We think beyond just the perimeter of the park,” Mark said. “We think: How can this holistically support overall community health?”

Uprisings and Justice in Minneapolis