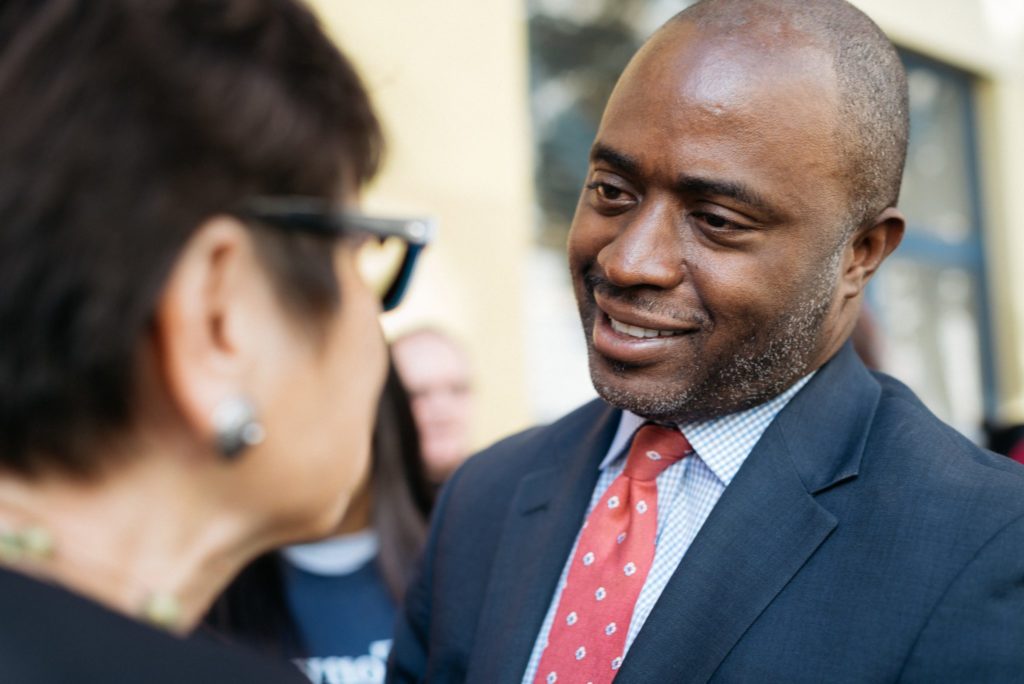 UPDATE, Nov. 19: With late-ballot counting giving Tony Thurmond an insurmountable lead over opponent Marshall Tuck, Thurmond declared victory Saturday in the race for California Superintendent of Public Instruction. Tuck had earlier conceded and sent a congratulatory message to Thurmond. This morning, according to the California Secretary of State’s website, Thurmond leads Tuck by 155,000 votes. The following story was written the morning after election day, when Tuck enjoyed an 86,000-vote edge.

It began as a referendum on California public education and concluded as the most expensive schools race in history. As of Wednesday morning, the election of a new California Superintendent of Public Instruction was too close to call.

In California, where about 30 to 40 percent of mail-in ballots are typically still en route on election night, a clear winner now hinges on the U.S. Postal Service and a tally of provisional ballots over the coming days.

Though the nonpartisan race featured two ostensibly liberal Democratic challengers vying for an influential, albeit “soft power” job as head of the California Department of Education, the candidates campaigned from opposite sides of a vast ideological divide. Progressive Assemblymember and former social worker Tony Thurmond, who was backed by teachers and around $13 million in union independent expenditures, ran as a champion of low-income families and as the best bet for traditional neighborhood public schools, operating in fiscally strained districts, to get the resources they need to succeed. (Disclosure: Teachers unions that supported Thurmond are financial supporters of this website.)

Former charter school operator and businessman Marshall Tuck was making his second try for state schools chief after being defeated by incumbent Tom Torlakson in 2014 by some 260,000 votes. In that race, Tuck’s embrace of charter schools and the Vergara v. California lawsuit’s attack against teacher workplace protections earned him the support of the charter school lobby — and a then-record breaking $10.4 million in super PAC spending by some “school choice” billionaires. This time out, two billionaire PACs upped that ante to a titanic $28.8 million, which together with a strategy of appealing to Republicans and the California Trump base, today gives Tuck a 1.4 percent edge over Thurmond.

Even should Tuck ultimately prevail, it will put him at odds with much of the K-12 education agenda of governor-elect Gavin Newsom, who campaigned on a pledge of greater charter accountability and transparency. During the primary season, Newsom earned the bitter enmity of the charter industry by supporting curbs on its unregulated proliferation. With nearly 1,300 schools and a deregulation climate that has invited fraud and been likened to the Wild West, California is already the largest charter state in the nation, albeit with little unambiguous evidence that the schools are delivering promised equity for the state’s most disadvantaged students.

Measure B: Los Angeles Says No to Public Banking

Proposition 10: Was California’s Rent Control Fight Worth the Blood, Sweat and Cash?