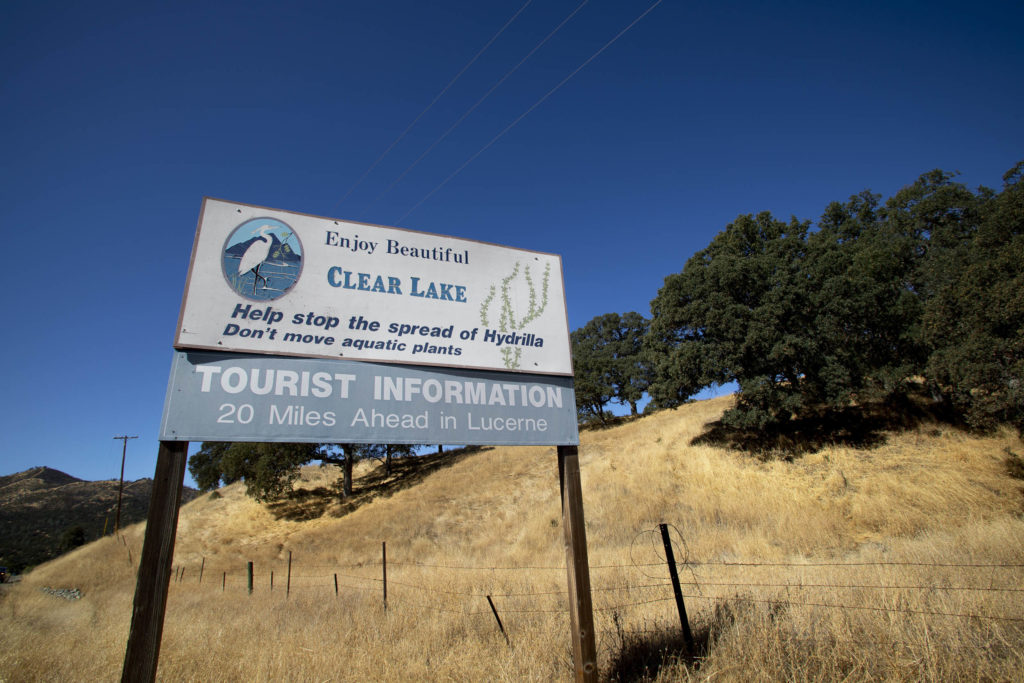 One hundred miles north of the state capital, Sacramento, sparsely populated Lake County is blessed by extraordinary natural beauty and cursed by deep-rooted poverty, low wages, inadequate public infrastructure, high levels of drug abuse and a housing shortage exacerbated by years of devastating wildfires that have destroyed thousands of buildings in the county since 2012.

All photos by Joanne Kim

There are jobs in the hilly, forested, county, but they tend to be low-paying home health work (the county has many retirees who qualify for In Home Support Service (IHSS) assistance, paid with county and state funds); non-unionized jobs in the four big casinos dotted around the county; agricultural employment – winemaking and marijuana cultivation are both boom industries; and fast-food and other low-paid service sector work. 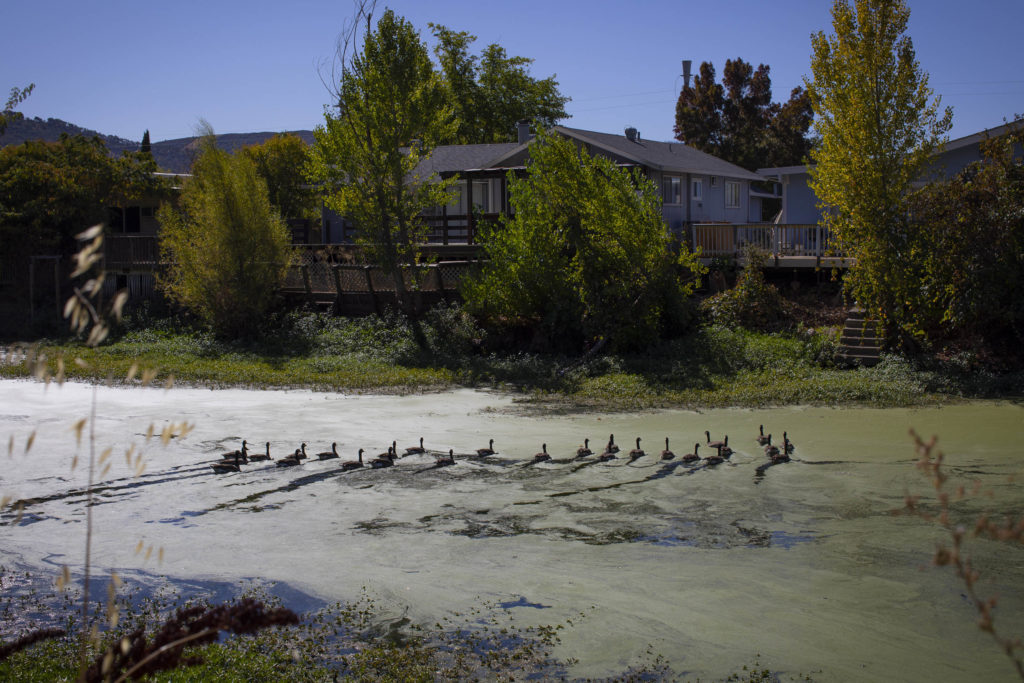 In the little lakeside hamlet of Clearlake Oaks, retiree Jim Hall lives in a small, run-down trailer, the shelves of which are stacked with months’ worth of canned foods, tubes of Pringles, jars of spices. Above these are arrayed dozens of comic books, carefully preserved in plastic wraps, and a full-length oil painting of the Seinfeld character Cosmo Kramer. The 76-year-old Hall grew up in the county, left to work in Hawaii, and returned a few years ago to, in his words, live out his last few years. He loves the landscape but he knows that many of his neighbors struggle with poverty. “More people want to live here than there are jobs to support the population,” he explains. His caregiver, Barbara Arviso, agrees. “I don’t live comfortably— I live from paycheck to paycheck,” she says. “I struggle with insurance, car tires, gasoline, food. I eat a lot of pasta. I don’t understand why our county is so poor.” 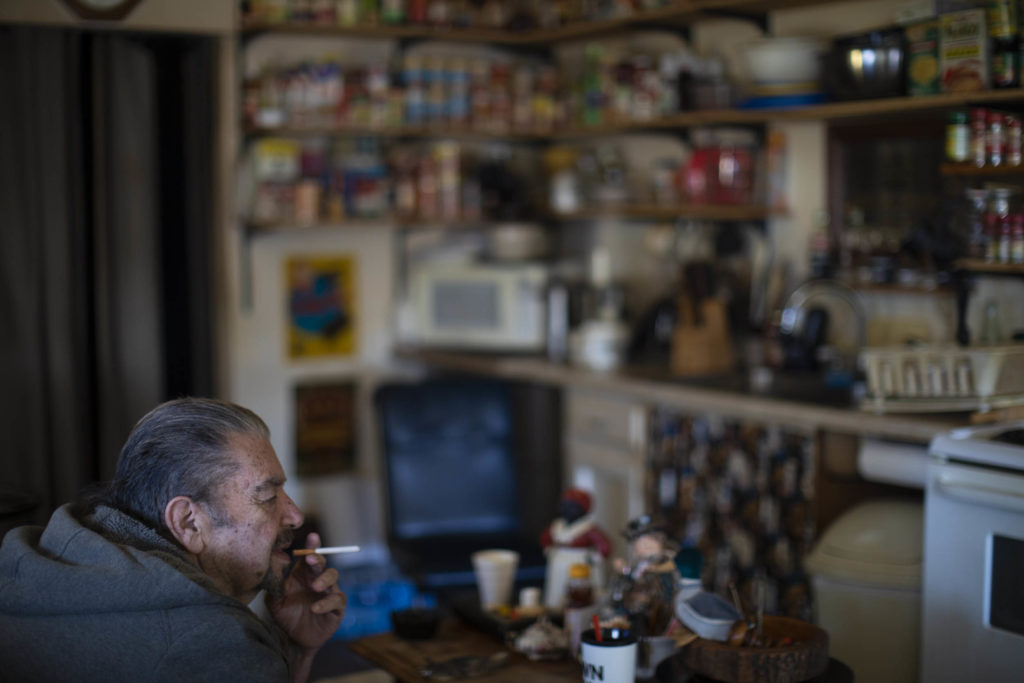 Jim Hall mostly spends his days in his small trailer. Born and raised in Lake County, he left to work in Hawaii for decades and “came back to die.”

It wasn’t always this way.

“I’ve lived in the county my entire life,” says local fire chief Willie Sapeta. “Growing up we had a fair amount of tourism and geothermal fields and the Homestake mine. The geothermal fields are now largely automated and the mine is closed. And our lake doesn’t bring in the tourism it did before.” Contaminated with algae, as well as with mercury and other pollutants from the mines, the lake is no longer clear; and as its quality has declined, so fewer tourists have come to holiday there. “The loss of good wages had a trickle-down effect on everyone.” 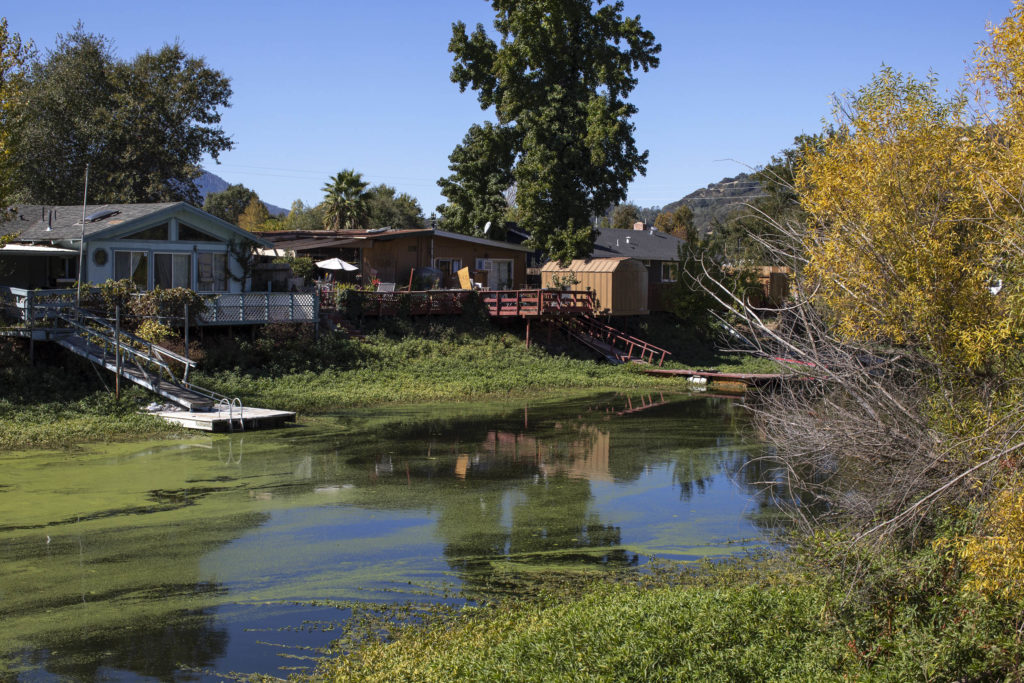 The back view from homes in Clearlake Oaks.

A starting firefighter in the county will, Sapeta says, earn about $50,000 annually. Nearby, in far wealthier Napa, that same firefighter would be earning more than $70,000. Not surprisingly, there’s a brain-and-skills drain from Lake County to elsewhere in the region. The result is economic stagnation. It’s a “you-can’t-get-in, you-can’t-get-out type of county,” says longtime resident Kendra Cramer. “We’re surrounded by mountains and the railroad never came through.” Now, she says, the same thing holds with cars; the interstate bypasses her county, and so do the high-tech, high-paying industries. 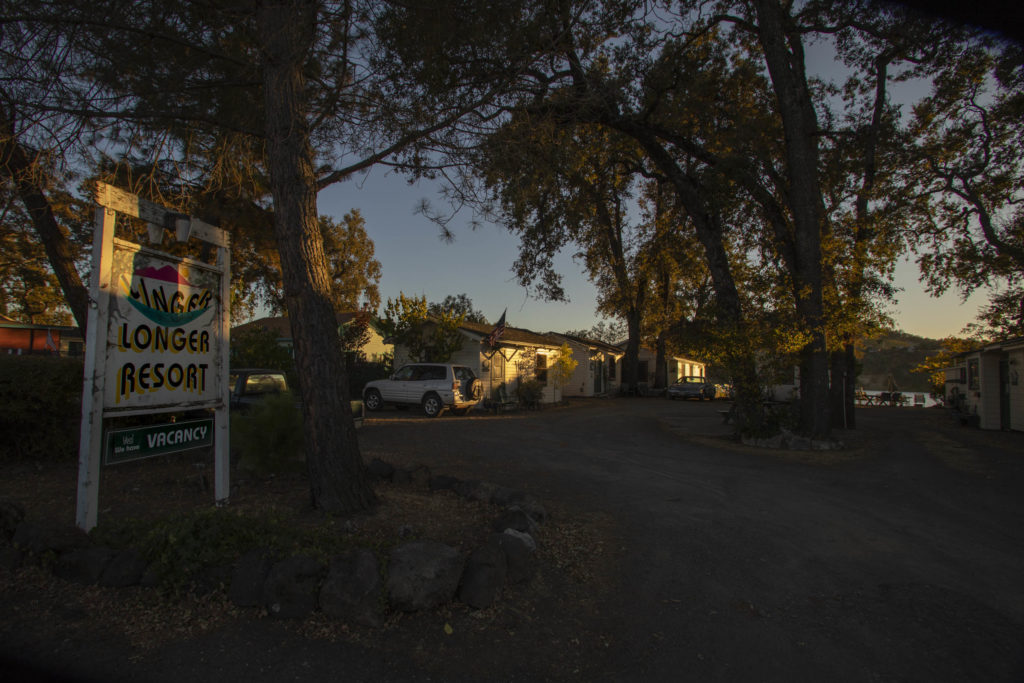 Clearlake was once a resort town where tourists came to enjoy its clean waters.

The prevalence of low-wage, hourly, employment in this county of 64,000 residents means that the many food banks and thrift stores in the small towns, such as Clearlake and Finley, Kelseyville and Lakeport, which dot the perimeter of the lake, are never short of clients. “We serve people who are gainfully employed,” explains David Goodman of the Redwood Empire Food Bank. “They just simply don’t earn enough money. In Lake County, there’s a tremendous amount of poverty and not a lot of services available. It’s one of the most impoverished counties in California.” Goodman’s food bank alone distributes close to 2 million pounds of food a year in the county. Some of the clients are homeless – Sapeta estimates that more than 3,000 buildings, over half of them residences, were destroyed in recent fires that have swept the 1,256-square-mile county, and that less than a quarter have been rebuilt; there are, these days, homeless encampments out back of both the Walmart and the Safeway in Clearlake. But many of the region’s hungry do have homes; they are, however, trapped in low-wage jobs. 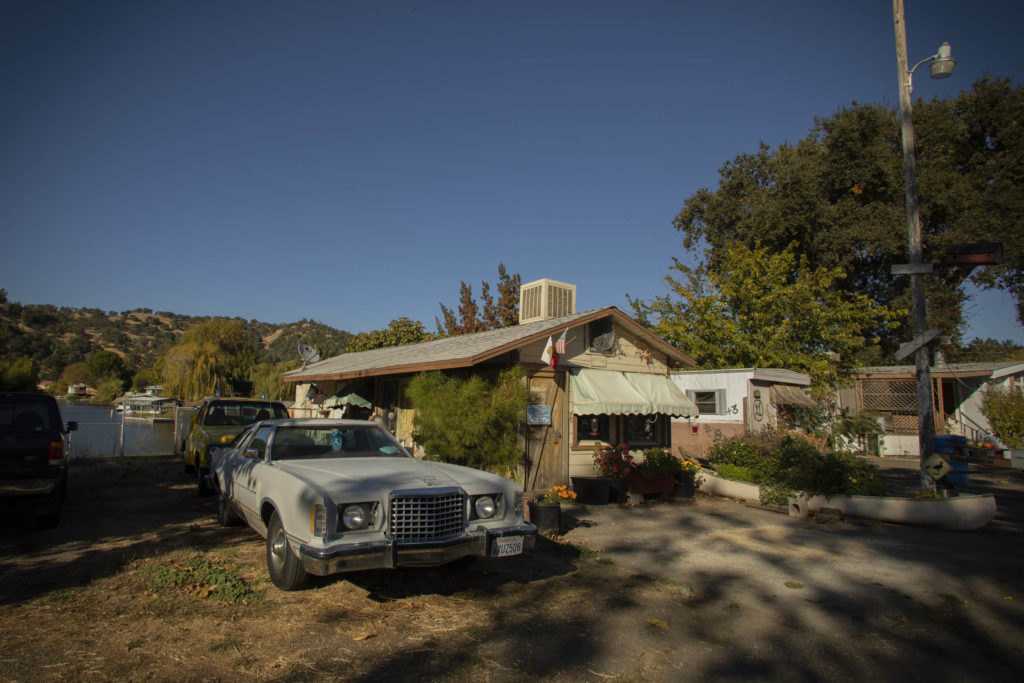 Jim Hall grows vegetables in an old canoe. He gives away his tomatoes to people who drive by.

The median household income in the county is $40,446, compared to a statewide median of about $67,100. The official poverty rate (itself a largely inadequate measure of the scale of poverty in a state with a high cost of living such as California) is 20.2 percent, compared to 12.8 percent in the state as a whole. And according to a recent study by the Robert Wood Johnson Foundation and the University of Wisconsin’s Population Health Institute, Lake County is dead last out of the state’s 58 counties in terms of health and well-being measures.

Lake County poverty is disproportionately concentrated in and around the town of Clearlake. “It’s a sad town,” says 67-year-old IHSS worker Pam Fernandez, as she sips iced tea in her small living room under the many hanging plants that she cultivates. Her house is on a small side street, the asphalt surface of which is pockmarked by deep, unrepaired potholes. 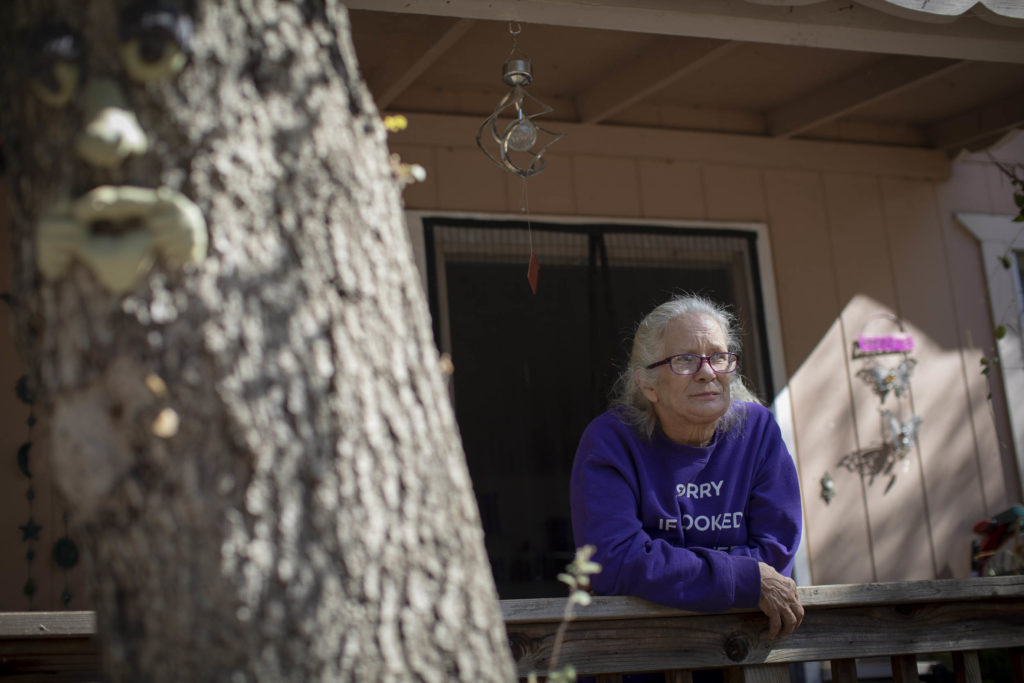 Pam Fernandez struggles to pay for her car registration and gas. She works as an In Home Support Service assistant.

Fernandez recently wrecked her car, and a friend gave her an old Mitsubishi 3000 to drive instead. But it sits unused in her driveway; she can’t afford to pay the registration fees. And even if she could, she’d struggle to afford to fill its tank with gas. That’s a common complaint of low-income residents of rural, spread-out communities like Lake County. Thirty-nine-year-old Angie Pires, who works as a general manager at a fastener company, says that she pays about $300 a month for gas; her partner, who commutes each day to work in the town of Ukiah, in neighboring Mendocino County, spends upwards of $600 a month on gas. Add on the high cost of utilities in the era of wildfires – Pires says she was paying $350 a month in PG&E bills, double what her bills were before the fires, she estimates, until she recently downsized to a smaller house – and of water, and the financial balancing act for these workers becomes even more difficult.

Fernandez, who moved to Clearlake from the Bay Area to be nearer her family and to escape unaffordably high housing costs, has found that while her rent is cheaper in the county, other costs are prohibitive. In the Bay Area, her health insurance was largely covered under a local agreement with her union, the Service Employees International Union, as it is for IHSS workers in many of the surrounding counties. (Disclosure: SEIU is a financial supporter of this website.) She assumed she would have similar coverage when she moved, so she declined Medicare. Here in Lake County, however, the union hasn’t negotiated coverage with the conservative county’s board of supervisors. 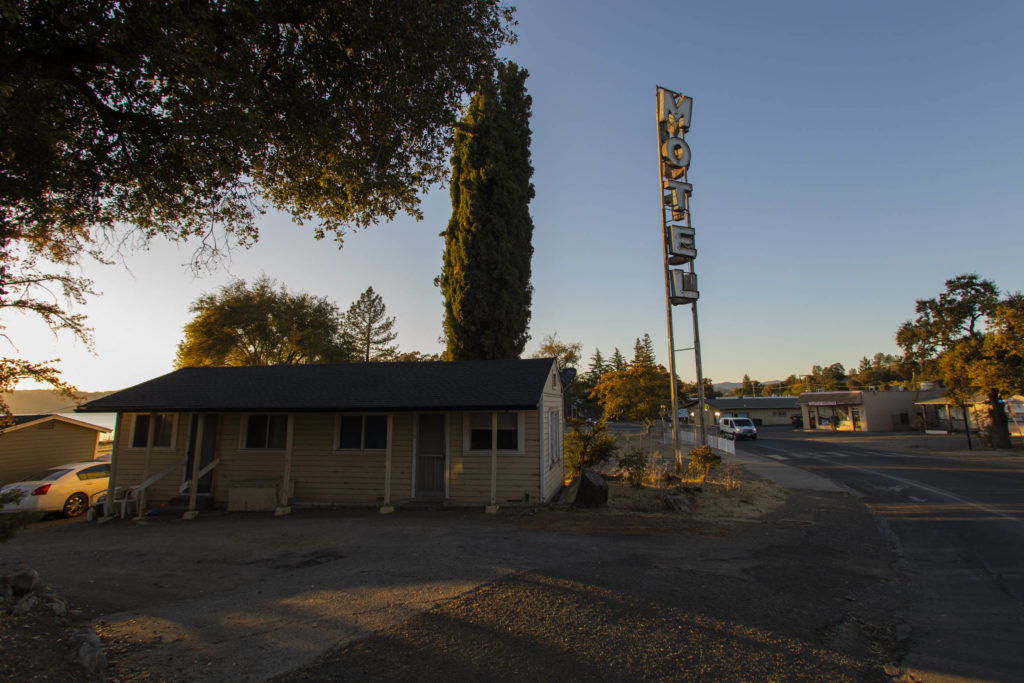 A motel on Lakeshore Drive in the town of Clearlake.

And so, earning the minimum wage of $12 an hour, she can’t afford to pay for medical insurance – even under the Affordable Care Act it would cost her over $730 a month, she avers; when she gets sick she visits the local emergency room, racking up more bills in the process. (She recently received a $4,500 bill for one such visit). Recently bereaved, she has sought mental health counseling, but the least expensive she can find is still $50 a visit— more than she can afford. She has, she admits sheepishly, recently taken to borrowing money, at exorbitant rates of interest, from local payday lenders.

Alana Tatum, shopping for clothes at a thrift store in the center of Clearlake, can empathize with Fernandez’s struggles around paying medical bills. Thirty-six years old, she works part time as an administrator while she and her husband try to get a small business off the ground. Neither has health coverage. “I’m caught between ‘do I have health insurance or pay for the cost for my daughter to have health insurance through her tuition plan at Sacramento State?’ We’re not in the pool of people who have nothing here, but we’re hanging on by the skin of our teeth.” 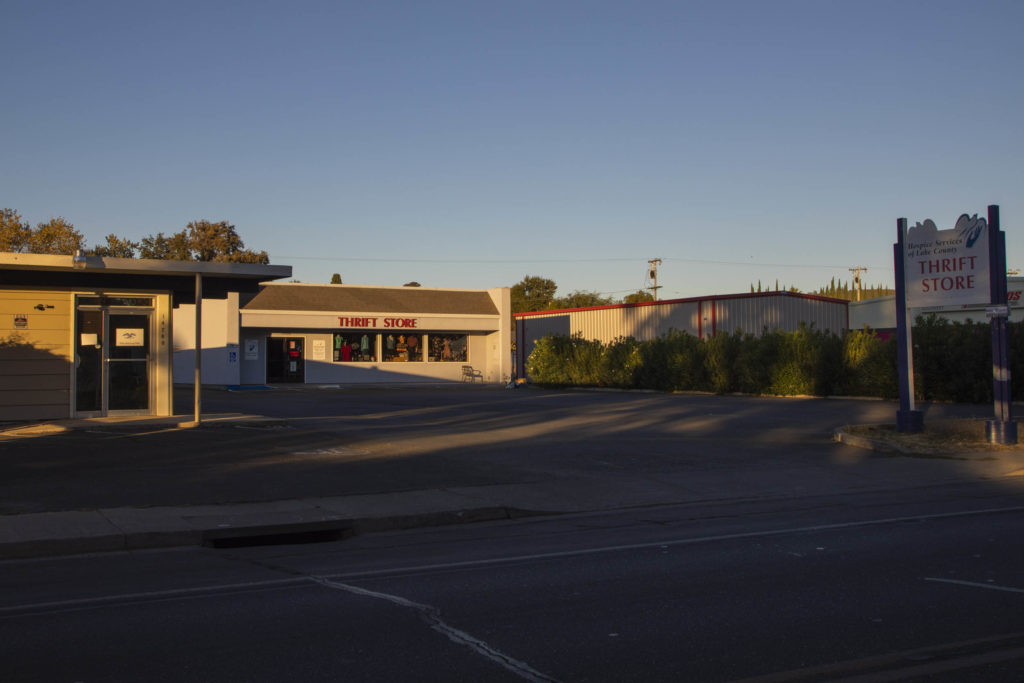 Many residents of Lake County shop for clothes at thrift stores due to their low costs.

The day-to-day struggle to make ends meet is familiar to another IHSS worker in town, 54-year-old Lisa Pattee, a skinny, sun-tanned woman who ties back her brown hair in a ponytail. “I work as much as I can,” she explains. “Do IHSS, do other work. Barely keeping my bills paid. No health insurance through work.” (She does have insurance via the Medi-Cal program). Unable to drive because of too many tickets that she can’t afford to pay off, she relies on public transport. But the buses in this rural county come so infrequently that, oftentimes, she ends up walking long distances instead. She pumps water from a well, but since the onset of California’s only recently ended drought, both the quantity and the quality of her well water has declined – “it’s nasty when you taste it, no matter how many filters you run it through” — and so she buys cases of bottled water instead. She spends, she estimates, at least $15 a week on these bottles. 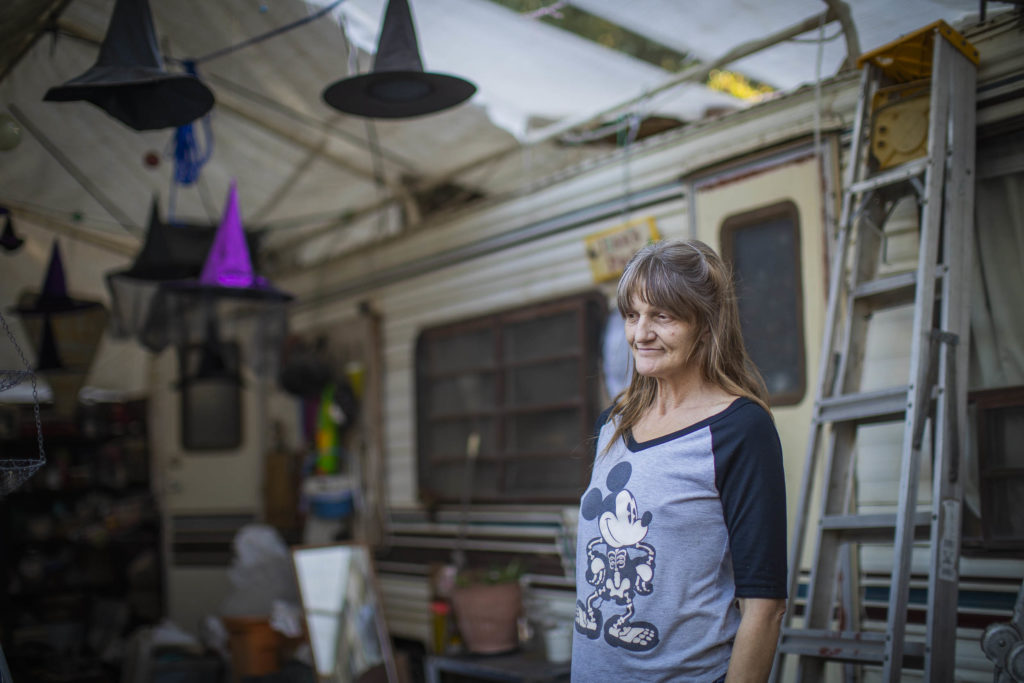 Lisa Pattee works as much as she can while she takes care of her sick mother and her mother’s best friend, who both live in the house below her trailer.

There are no quick fixes to the sort of ingrained poverty that Lake County experiences. For residents like Fernandez, each passing year increases their financial fragility. Each month, Fernandez estimates, she falls another few hundred dollars behind. And so she skips what bills she can, trying to guesstimate which she can miss a month’s payment on without having the service terminated. “I rob Paul to pay Peter. I never used to have to do that. That sucks.” Fernandez is already thinking about how much she is going to have to borrow next time she has to go to her local payday lender. “I’m going to have to see them again,” she acknowledges. “Probably by the end of this week.” 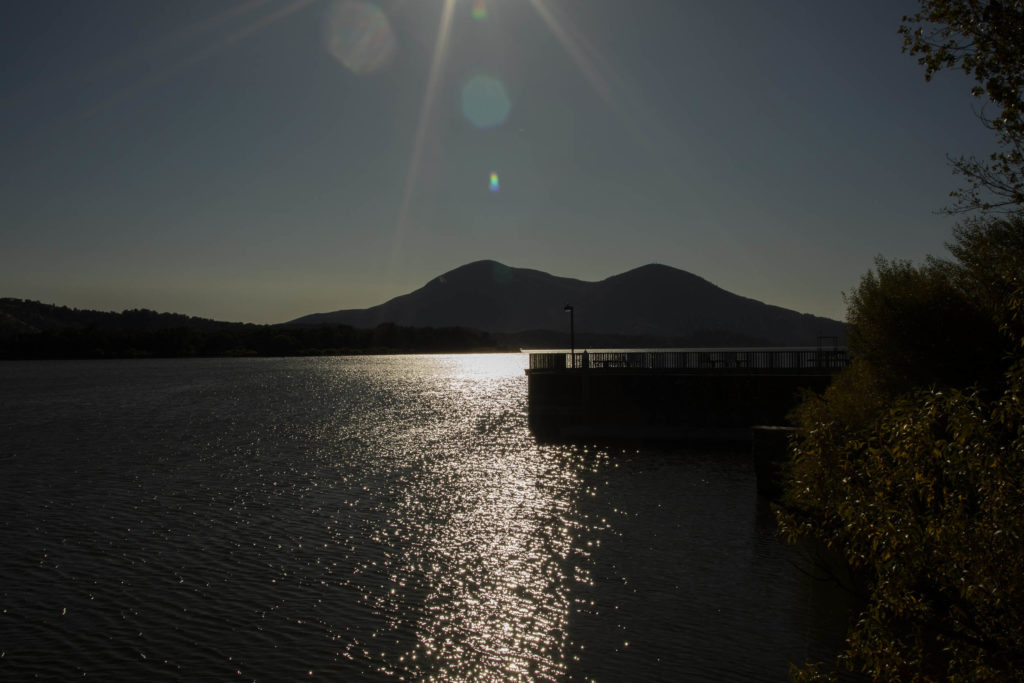 Clear Lake near the boat launch in Clearlake Oaks.

“We have the cleanest air,” Fernandez continues. But then, she adds ruefully, pondering the poverty that surrounds her, that’s because “there are no manufacturers, nothing to create the smog.”

Hard Times in the Imperial Valley