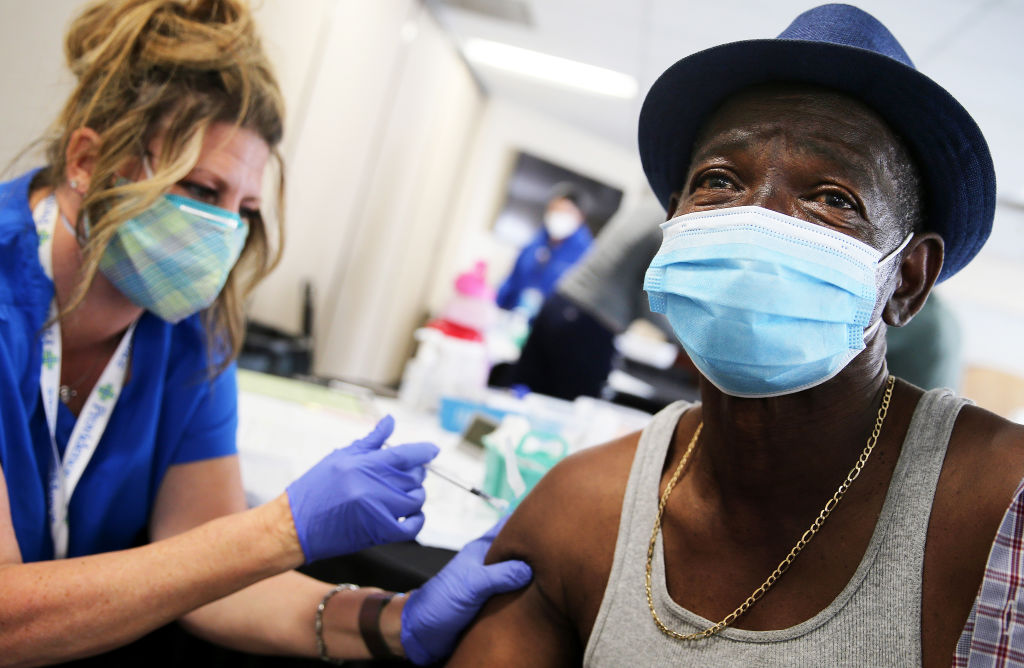 If the past few months have done nothing else, they’ve shown definitively that California’s lurching effort to vaccinate its citizens against COVID-19 will always come down to two factors: supply and logistics. Without an effective distribution plan, a large inventory doesn’t mean much. Without enough vaccine, however, nothing else matters.

Given that context, it is bewildering to consider recent events. First, Gov. Gavin Newsom acknowledged that the next few weeks will be “a constrained environment in terms of access to vaccine” — governor-speak for a shortage of doses. Los Angeles County Dept. of Public Health Director Barbara Ferrer went further, saying no vaccine cavalry would be arriving from Johnson & Johnson for at least two weeks due to production issues.

That short-term inventory problem may ultimately be dwarfed by what’s happening on the distribution side. There, a broad-scale revolt against the idea of health industry giant Blue Shield of California controlling the statewide process has led to Newsom’s administration having to make 11th-hour side deals with individual counties in order to keep supply chains moving.

Here, in mid-March, it has all added up to something that looks a lot like chaos. And the stakes grew higher on Monday, when California expanded its vaccine eligibility rolls to include residents with disabilities and certain underlying health conditions, as well as those who live or work in high-risk congregate residential settings (homeless shelters, jails and prisons, etc.), along with public transit and airport employees.

That is an estimated 4.4 million new people joining the vaccine queue at a time when county administrators say they don’t know where their doses are coming from and in what quantities – and Newsom himself admits we’re headed for a rough patch.

In last week’s State of the State address at Dodger Stadium, Newsom went on the offensive, asserting that California has “the most robust vaccination program in America,” adding, “California now ranks sixth in the world for vaccine distribution, ahead of countries – not states – ahead of countries like Israel, Russia, Germany and France.”

That is playing with numbers, and the reality is not so kind. According to Centers for Disease Control (CDC) statistics through March 14, California has administered nearly 12 million doses of vaccine, far more than any other U.S. state or territory. But in terms of doses administered per 100,000 residents, its performance ranks worse than all but seven states: Missouri, Mississippi, Arkansas, Texas, Tennessee, Alabama and Georgia.

Beyond that, the state has done a poor job of getting its available doses into arms. According to the medical news site Becker’s Hospital Review, California’s percentage of its vaccine inventory that has actually been administered, 72.6%, ranks 43rd among the 50 states and the District of Columbia.

“We are quite confident that Blue Shield doesn’t know what is needed in every community in the state.”

The supply side story is not new, only frustrating – and it certainly isn’t unique to California. It began during the Trump administration’s tragic mishandling of the COVID crisis in general, which mostly involved either ignoring or downplaying the pandemic and then moving slowly to increase production of potential life saving vaccines. It will take weeks, if not months, of ramped up activity to overcome those large scale errors.

In this case, Johnson & Johnson officials acknowledged last month that the company was millions of doses behind its production goals as it attempted to mass manufacture its single-shot COVID vaccine. Thus, state health authorities in California and elsewhere do not know how much of the J&J vaccine they’ll get or on what schedule, as opposed to the two dose vaccines produced by Pfizer and Moderna, whose delivery federal officials have largely been able to predict.

This is obviously a problem, albeit one that may ease by sometime in April. But in California, it takes a back seat to the hostile county-by-county response to Newsom’s decision to place Blue Shield in charge of the statewide vaccine rollout.

The governor’s idea was for the insurance behemoth, which contributed $42,000 to Newsom in 2018 and another $31,000 in 2019, to take over the task of deciding how many vaccine doses went where in California and manage that process. But from the start, Blue Shield met with pushback at the county level, often by health officials who were (and remain) convinced that they, not the corporate entity, knew best how to distribute doses in their areas.

University of California administrators claim they had to fight Blue Shield after the insurer proposed “a seemingly expansive scope of access to patient data.”

“They [state officials] are relying upon an insurance company to make recommendations about distribution that are related to populations we normally take care of,” Santa Clara County Executive Jeff Smith told the Bay Area News Group. “We know where the populations are, we know where the players are, we know who the vaccinators are — and they’re going to ask a private corporation to give them advice? It’s absurd.”

It was an opinion echoed up and down the state. San Diego County executives said last week it was “too early in the process” for them to sign the contract with Blue Shield, even though Newsom’s plan was announced in late January. Los Angeles County health officials, like those in Santa Clara, asked to opt out of the deal and instead continue working directly with the state, a request the California Department of Public Health granted. As of last week, only one of California’s 58 counties, Kern County, had signed the deal with Blue Shield.

Trust issues factor in, too. University of California administrators said they had to push back on Blue Shield after the company’s initial proposed agreement included the insurer attempting “a seemingly expansive scope of access to patient data,” UC Health spokeswoman Heather Harper told the Los Angeles Times. Harper said UC’s complaints led Blue Shield to revise the agreement and limit such data collection, and UC ultimately signed. (A spokesperson for Blue Shield denied the company sought such access to patient data.)

It’s not clear how a mass vaccination plan can possibly work if some counties are getting their distributions through a health insurer and others are working directly with the state. Under the Blue Shield plan, the state sets priorities, and the company uses an algorithm to decide where to send doses. But individual counties clearly are going to be permitted to do their own thing, bypassing the Blue Shield approach altogether – and state officials say they won’t be penalized for doing so by losing out on dosage shipments.

“I think all of the counties feel at this point like they have really strong public health departments that have a lot of experience and knowledge around setting up and executing vaccination programs,” Los Angeles County’s Ferrer said last week.

Or, as Santa Clara’s Smith put it, “We are quite confident that Blue Shield doesn’t know what is needed in every community in the state.” One by one, California’s counties are making their voices heard.