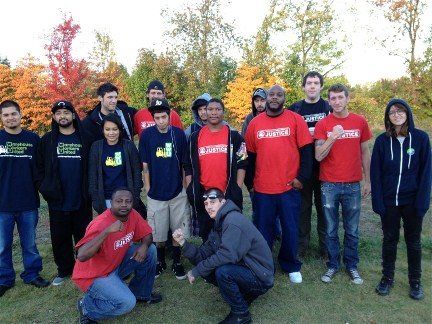 Warehouse workers after arriving in Bentonville.

Following national strikes at Walmart stores and at warehouses in Southern California and Illinois, workers who move Walmart merchandise at those sites have just arrived in Arkansas to call for an end to a new wave of retaliation against employees  at Walmart-controlled warehouses. The dozen-plus warehouse workers have come to Bentonville during Walmart’s annual “Stakeholder Summit.”

They plan to draw a stark contrast between the image Walmart projects and the reality that hundreds of thousands of U.S. workers throughout its supply chain face intense retaliation whenever they speak out about poor working conditions.

The workers will hold a media conference later this morning, after which they will deliver a petition signed by more than 150,000 people nationally to Walmart’s home office.

“Walmart cannot have it both ways,” said Guadalupe Palma, a director for Warehouse Workers United, a group committed to improving warehousing jobs. “While it supports quality work in our communities, hundreds of thousands of workers in those same communities are suffering and live in fear of losing their jobs or having their pay cut just for speaking out. Walmart ignores part of the communities in which it works.”

The majority of warehouse workers are hired through temp agencies, are paid low wages, receive no benefits and have no job security. They lift heavy boxes – some weigh up to 200 pounds – from shipping containers. Workers experience inhumane work speeds, pollutants, high temperatures, little ventilation and intense retaliation if they complain about the conditions. Serious injuries on the job are common.

This fall workers went on strike to protest retaliation committed by their employers, Walmart contractors, when they spoke out about their working conditions. When they returned to work the retaliation continued. Walmart is the largest company in the world and sets the standards in the retail and logistics industries.