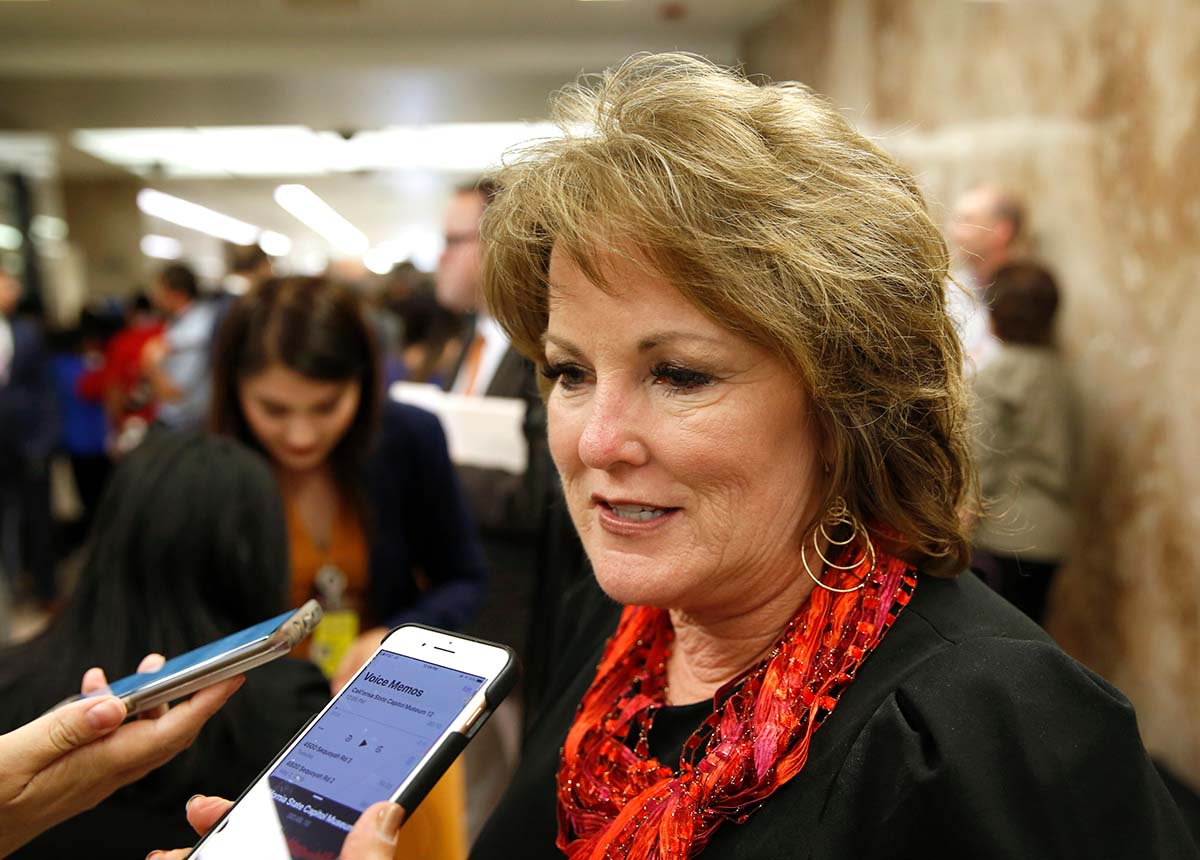 State Sen. Shannon Grove talks with reporters at the Capitol in Sacramento on May 9, 2019. (AP Photo/Rich Pedroncelli)

During the most recent legislative session in California, at least three senators on powerful environmental and finance committees derived significant income from fossil fuel companies, according to financial disclosures obtained by Capital & Main.

One senator, Republican Shannon Grove of Bakersfield, was appointed to the Natural Resources and Water Committee. Many environmental bills in the chamber must pass through this committee before going to the floor for a vote. Grove consistently voted against legislation for stronger oil and gas regulations this past year.

In parts of Grove’s district, which includes Bakersfield and eastern Kern and Tulare counties as well as a large swathe of San Bernardino County, air quality is among the worst in the state. For years, residents and community activists in Kern have reported poor health impacts from oil and gas drilling, which releases noxious chemicals correlated with diseases.

Her husband, Rick Grove, earns up to $100,000 a year from Houston-based Kraken Oil & Gas LLC, according to her financial disclosure in March. In addition, the senator brings in up to a six-figure income as president and CEO of a Bakersfield-based staffing agency that provides services to at least 13 companies involved in the local oil and gas sector.

The appointments to elite committees grant a handful of senators an outsized impact on determining which pieces of proposed environmental and climate legislation eventually become law — and can present a conflict of interest if senators have investments in fossil fuel companies.

Among environmental groups in California, the appointments are raising questions about how legislators are assigned to key committees. Since assuming the position as the legislative body’s president pro tempore in 2018, Sen. Toni Atkins (D-San Diego) has made the appointments.

Lawmakers submit appointment requests at the start of each session, and the Senate’s president pro tem makes appointments based in part on striking a balance between Republican and Democrat appointees. But beyond that, the process is highly opaque and based on Atkins’ discretion.

“​​Being an elected official and doing the bidding of the fossil fuel industry is climate denial or worse.”

Atkins, through her director of communications, Niesha Fritz, did not answer questions about whether she was aware of the senators’ fossil fuel investments, or if this knowledge would affect how she makes appointments in the future.

“​​Being an elected official and doing the bidding of the fossil fuel industry is climate denial or worse,” said Kassie Siegel, Climate Law Institute director and senior counsel for the Center for Biological Diversity, which pushes for climate and environmental legislation. “When our state is on fire and these producers have knowingly caused this problem, it’s not acceptable, no matter what party you’re in, to be voting for the protection of the oil industry instead of Californians.”

Legislators who derive income from oil and gas companies didn’t always vote in line with the priorities of the industry, however.

For example, Sen. Bob Wieckowski (D-Fremont), who is on the Senate Environmental Quality Committee, owns tens of thousands of dollars in stock in Exxon, Shell, Chevron, NextEra Energy and Freeport McMoRan. He is also on the Senate Appropriations Committee, which votes on bills that would have a fiscal impact.

Yet he voted in favor of several bills proposing oil and gas regulations that made it to his chamber.

Wieckowski was at the United Nations’ climate-focused Conference of the Parties in Scotland last month. In a statement, Wieckowski said, “I do not believe there should be a recusal requirement when voting on issues that affect entire industries. As legislators, we must act on a broad scale of issues that affect our society.” He also placed blame on an unnamed firm that manages his investment portfolio for his fossil fuel stocks.

Sen. Patricia Bates has consistently voted against proposed regulations on the oil and gas industry. She holds between $10,000 and $100,000 in stock in the largest natural gas utility in Oregon.

His stock ownership was perplexing for Laura Neish, the executive director of 350 Bay Area, who said Wieckowski has been a “good ally” by supporting policies that promote transportation electrification.

“I can’t defend Bob in this particular case,” she said. “I think that no sane person should own fossil fuel stocks, period. In general, 350 Bay Area strongly feel all elected officials should take [a] no fossil money pledge and refuse to take donations from dirty energy companies.”

Another senator on the Appropriations Committee, Patricia Bates (R-Orange County), has consistently voted against proposed regulations on the oil and gas industry. She holds between $10,000 and $100,000 in stock in NW Natural, the largest natural gas utility in Oregon and a company that also maintains a gas storage facility near Fresno.

Bates did not respond to a request for comment.

Sen. Shannon Grove is the one senator whose extensive personal involvement with the oil and gas industry appears to align with her votes on environmental and climate legislation.

She earns up to $100,000 a year as president and CEO of Continental Labor and Staffing Resources, a labor staffing and consulting company in Bakersfield. Her financial disclosure form lists the company’s clients in 2020.

Among the 13 clients with clear links to the oil and gas industry is San Joaquin Refining Co., which operates a refinery; Energy Link Industrial Services Inc., which supplies essential industry equipment such as catalytic converters and gas compressors as well as repair services and mechanical field work; and Pro Tool Services, which specializes in essential parts for oil wells.

When California sued the Trump administration for rescinding regulations on fracking, Sen. Grove issued a statement declaring that “domestic oil production must continue.”

Capital & Main reached out for an interview with Grove and sent questions about whether her involvement with the industry impacts her judgment as a senator. Through her director of communications, Brooke Sorensen, Grove sent a general statement, not acknowledging the questions.

“The petroleum and agriculture industries feed and fuel our nation, they are the biggest economic engine in my district. In fact, the oil industry produces the best, most secure and well-paying jobs for the families I represent. I will continue to fight every day that I’m in public office against the left’s agenda that is driving gas prices through the roof and cutting off water to our agriculture industry.”

Grove has long been an unabashed supporter of the oil and gas industry and, in the last few years, has strongly criticized regulations affecting and enforcement actions against the industry. When the state sued the Trump administration for rescinding regulations on fracking, Grove issued a statement declaring that “domestic oil production must continue.”

Her comments, both in press releases and in legislative committees, often mirror talking points of the state’s two dominant oil and gas associations, including concerns that California will import more oil from nations with weaker environmental standards if production is phased out in the state.

Those sentiments were on full display earlier this year, when several critical bills went before her committee.

She was a vocal opponent of a bill to institute setbacks, which are physical buffers between oil wells and sensitive sites like homes, schools and health centers; researchers and officials in California have concluded such measures are necessary to protect public health, and the Newsom administration recently vowed to draft rules implementing 3,200 foot setbacks for future oil wells.

Among other legislation Grove opposed were a bill to increase the state’s funds for plugging wells; a bill that would have made basic information about wells publicly available over the internet, including past notices of violation; and a bill that, in its original form, would have encouraged union labor at oil fields by requiring contractors and subcontractors to hire a “skilled and trained” workforce.

The last one may have presented the most direct conflict of interest for Grove because she runs a company that supplies staff, including construction and maintenance workers, to oil fields in the lower San Joaquin Valley. Any legislation that asks employers to consider whether workers graduated from state-certified apprenticeship programs could have encouraged union workers, since unions oversee the vast majority of such programs.

And that may have cut into her bottom line. Seventy percent of oil production in California occurs in her district, and the bill could have been a watershed moment for oil patch work in the state. Continental Labor & Staffing Resources did not respond to Capital & Main’s questions about whether the staffing agency provides apprenticeship programs or if any of the workers it sends to companies are part of unions.

But when the bill came up in a Senate Natural Resources and Water Committee hearing, Grove mocked the idea behind it.

“I guess if it is unionized, at least the oil industry will become instantly safe and environmentally friendly,” Grove said.

“To me, that explains everything,” said Martin Rodriguez, president of the Building Trades Council of Santa Barbara/San Luis Obispo/Ventura, when told about Grove’s position at Continental Labor and Staffing Resources. He lobbied for the bill’s passage in person.

Rodriguez said there may have been a conflict of interest for Grove if most of the workers Continental Labor & Staffing Resources sends to companies aren’t part of unions. “I think she should have abstained herself from voting on the bill for that reason,” he continued.

At least one environmental group called for Grove to step down from future appointment committees when told about her position and investments.

“Sen. Grove’s place as the CEO of an oil and gas service provider, along with her husband’s income from oil and gas, leave little doubt that her reason for promoting oil and gas interests is pure self-interest,” said Caroline Farrell, executive director of the Center on Race, Poverty & the Environment. “Given this conflict of interest, it is entirely unacceptable for her to sit on the Senate Natural Resources and Water Committee, which votes on California’s oil and gas policies.”