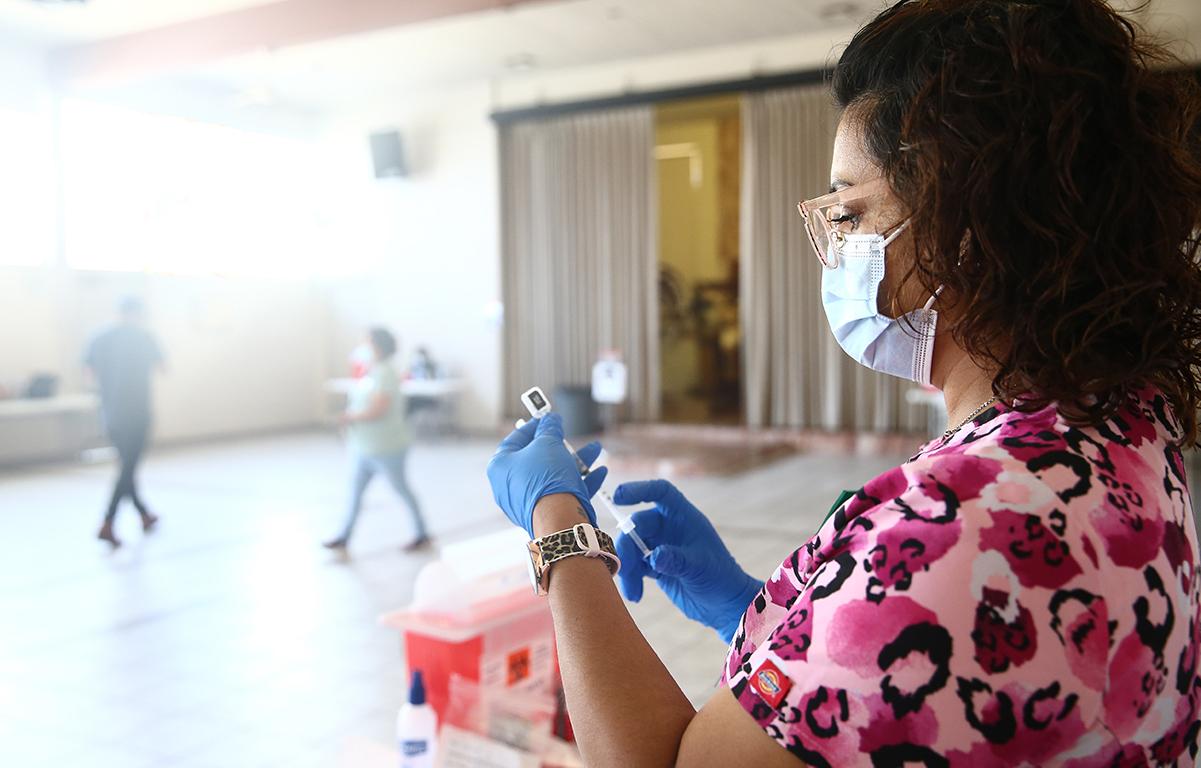 It’s easy to get lost in the numbers. The impact of the COVID-19 pandemic, after all, has been measured and explained by statistics, and those stats have morphed and shape-shifted constantly for more than a year as the spread of the virus ebbed and flowed.

In California, though, there remains a simple and overriding truth: If the state wants to put the worst of COVID behind it for good, it’s going to have to reach Latino individuals and families and either persuade them to be vaccinated or deliver to them the doses they’re willing to receive. Anything less will almost certainly delay the state’s arduous process of reclaiming much of its former daily life.

“Here in L.A. County, we need to continue to get vaccines into the arms of people that most need the vaccine,” Los Angeles County Public Health Director Barbara Ferrer said on Friday. “We will remain focused on this work to ensure distribution of the vaccine is equitable.”

Equity is central, and the numbers do speak. Although Latinos account for 63% of California’s COVID cases and 48% of its virus-related deaths, only about 40% have yet received at least one dose of a vaccine. Of the more than 34 million doses of vaccines administered so far statewide, Latinos have received 25.6%.

There’s no single explanation for those disproportionately low vaccination figures, which is why a quick fix appears elusive. But there are some clues, and many of them fit hand in glove with the larger issue of Latinos’ lower economic standing in the state.

Despite California’s effort to divert 40% of available doses to underserved communities, vaccination numbers among both Latino and Black residents lag behind other ethnicities.

According to an analysis of vaccine data by the Los Angeles Times, only 40% of Californians who live in the most disadvantaged communities have received at least one dose of vaccine, while 63% of those living in the most advantaged areas have done so. (The California Department of Public Health divides communities in the state into four quartiles, from least to most advantaged, based upon a variety of social and economic factors.)

Latinos, who fill many of the lower wage service and agricultural jobs in the state, tend to reside in the most disadvantaged areas, where vaccination efforts have been spotty and where, at least early on, distribution of the vaccine itself was often severely limited, according to community clinic workers in those areas.

State officials have pushed to improve that situation, announcing in March a plan to divert 40% of California’s available doses to underserved communities. That has raised vaccination numbers among both Latino and Black residents of the state, but their rates still lag behind other ethnicities. Whites account for 17% of COVID cases in California but have received 40% of the available vaccine doses, according to the Kaiser Family Foundation, and Asian residents of the state have received 18% of doses while accounting for just 6% of cases.

While it’s risky to generalize about a state so geographically and demographically diverse, California’s collective effort to vaccinate the population appears to have faltered in two major areas: lower income urban neighborhoods and more remote and agricultural rural regions. Both categories include significant numbers of Latino residents.

At times, farmworkers’ groups have undertaken the effort themselves, bypassing state and county vaccination models and appealing directly to the federal government for shipments of doses. “We were ready to begin serving a population that, I think, just wasn’t put in line, let alone in front of the line,” Chris Valadez, president of the Grower-Shipper Association, a nonprofit organization of growers, told the news site CalMatters. The group estimates that so far it has vaccinated almost 40% of Monterey County’s farmworkers.

In some cases, community and rural clinic workers say they have to overcome vaccine hesitancy among Latinos. But until very recently, vaccine supply and distribution were the major culprits.

In California’s Central Valley, the hub of much of the agricultural production in the state, vaccination rates are trailing badly. Statewide, theTimes analysis found, more than 50% of residents have received at least one dose, but in Fresno County that figure was just 41.6%, and Merced, Kern and Tulare counties all had rates at 35% or below.

In some cases, community and rural clinic workers say they have to overcome vaccine hesitancy among Latino families. “We’ve also had a few people who were worried about their immigration status,” one clinic director told Capital & Main. But until very recently, vaccine supply and distribution were the major culprits.

“There are populations in California that have been experiencing what I call a double whammy,” Dr. Sergio Aguilar-Gaxiola, a health disparities expert at the University of California, Davis, told NBC News. “On one hand, they have been disproportionately impacted by COVID in excess mortality, and at the same time, they are not benefitting yet from equitable distribution of vaccines.”

Gov. Gavin Newsom has set June 15 as the target date for the state to fully reopen, and while experts disagree over whether herd immunity will ever truly be achieved, experts at UC San Francisco suggest that getting California to a 65% or 70% vaccination rate is quite possible. But as one COVID specialist told us last week, “You’re talking about grinding out these last several yards before you get to the goal line.”

To arrive there, the state needs to be willing to call on all resources. That includes both community and rural clinics, whose expertise and assistance have largely been ignored as Newsom handed off the state’s vaccine distribution responsibilities to Blue Shield, a longtime political contributor. The clinic workers are boots-on-the-ground specialists who often know their patients personally, and in the case of Latino neighborhoods and agricultural communities, they’re the medical experts with the best chance of persuading reluctant residents to take a dose and getting the word out that vaccines are available.

Cutting the state’s vast clinic system out of the vaccine distribution process was a critical misstep for Newsom’s administration, and it’s one of the reasons the state’s lower income communities have lagged behind in vaccination rates. With Latinos accounting for 39% of California’s population, no effort is too late — and it will take that effort, at full force, to get the state where it needs to go.