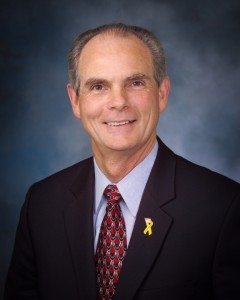 San Jose Mayor Chuck Reed made it official today – sort of. Speaking to a pension “restructuring” conference at Stanford University’s Hoover Institution, Reed said he hoped to file papers “in a few days” to put a ballot measure before voters that would allow cities in California to gut the retirement plans of their public employees. But he acknowledged that he and a group of fellow activists weren’t sure whether to put the measure on the ballot for November 2014 or sometime in 2016. (If the pension group wants to beat an approaching deadline and keep 2014 open as an option, it has to file papers soon.)

The lack of urgency contrasted with Reed’s half-hour talk, during which he painted a picture of a California teetering on the brink of pension-fund disaster, in which public safety employees would be laid off, libraries closed and retirement benefits decimated.

“Time is of the essence,” Reed warned – claiming that the longer his proposed amendment to the state constitution is postponed, the likelier it will be that current public employees will not be able to enjoy the full retirements they have been promised. It sounded like a preview of the stampede talk Californians are likely to hear if and when Reed’s initiative does land on the ballot.

Last year Reed persuaded San Jose voters to pass a local version of this measure, although it remains tied up in the courts. But now it seems San Jose was just a tryout for a much larger game. Reed, a registered Democrat, has emerged as a figurehead fronting for powerful financial interests and right-wing ideologues.

In a series of articles, Frying Pan News reporter Gary Cohn has revealed that the movement to deprive employees of their promised retirement plans is spearheaded by an alliance that includes Reed’s group of white-shoe conservatives, Texas hedge-fund billionaire John Arnold and the Pew Trusts research group. The latter two were instrumental in dismantling public employee retirement plans in Rhode Island and Kentucky. Last month, after Cohn had obtained a draft copy of the California ballot initiative, he sought Reed’s comments but the mayor dodged Cohn’s inquiries.

Today Reed blamed the supposed crisis in retirement funding on wishful thinking and the past bad decisions of elected officials to reward government employees with retirements the state and its cities couldn’t afford. However, David Sirota, writing for Salon, has outlined how “California’s pension shortfalls were exacerbated not by allegedly unsustainable benefits to retirees . . . [but] because Wall Street fraud destroyed the economy, thus driving stock prices — and the value of pension holdings — into the ground.”

And Matt Taibbi  has described, in a recent Rolling Stone feature, how Wall Street interests that are directly benefiting from the privatization of public pension funds are using panic propaganda to try and rewrite the history of what caused the Great Recession:

In state after state, politicians are following the Rhode Island playbook, using scare tactics and lavishly funded PR campaigns to cast teachers, firefighters and cops – not bankers – as the budget-devouring boogeymen responsible for the mounting fiscal problems of America’s states and cities.

Reed’s playbook seems to be Xeroxed from the ones used in Rhode Island and Kentucky. The strategy appears to be:

2. Fund a respectable research organization to propose a solution to prevent the sky from falling.

3. Bankroll a ballot campaign to replace the security of defined-benefit retirement plans with the roulette-wheel whims of the stock market – the very casino capitalism that wrecked the economy by 2009.

Reed’s statement about filing papers for the ballot initiative did not come during his prepared remarks, but was only extracted from him by an audience member during the question-and-answer session that followed. It was a sympathetic crowd whose members did not challenge anything he said. One man invited Reed to become a Republican. Another wanted to know if anything could be done “about the corrupt relationships between politicians and the unions.”

Finally, they stopped asking the mayor questions, leaving him with some dead air to fill.

“Last chance,” he told his prospective questioners. “I know I’m standing between you and cocktails – a dangerous place to be.” He’ll find out more about that location next year. Or in 2016.