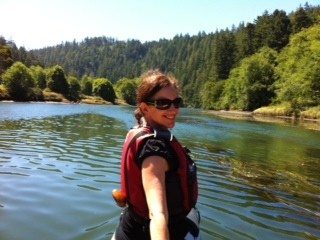 Against the Current: Madeline Janis

We just returned from a week of glorious — and nearly free – recreation in three of California’s state parks and want to reflect for a moment on the amazing resource that our state government manages for everyone.

Despite the recent controversy about the “extra” $54 million that was discovered by the state Department of Recreation, we were reminded about the incredible natural resource that we all have in our state parks. We should also be celebrating the extra money found to keep the parks open. It’s important to remind ourselves periodically that the only thing protecting the redwood forests and gorgeous coastlines from being 100 percent privately owned recreation centers for the rich, or a special resource for the lumber industry, is our government.

We spent a week vacationing in Mendocino County, the home of redwood groves that spill down to the gorgeous rocky Northern California coastline. We were surrounded by exquisite beauty. In one direction you see huge forests filled with endlessly tall, orange-hued trees, deep green forest floors covered with moss, fern groves and bushes filled with berries and covered with flowers. In the other direction, you can smell the sea air, hear the coastal birds and see the dramatic, rocky shore, with crashing waves, kelp forests and small bird-covered islands. And the wonderful thing is that these places belong to all of us, managed quite well by our own state government. 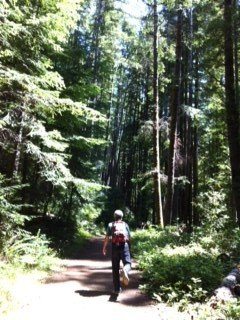 In coastal Mendocino County, three separate state parks stretch within a few miles of each other. The southernmost is Van Damme State Park, created during the the Great Depression through the Civilian Conservation Corps; it is one of California’s 70 or so parks that had been slated for closure before the emergency private fundraising and the discovery of the extra funding kept many more of the parks open.

Here’s a photo (right) of Donald hiking along an 8.5-mile loop trail that takes you along the Little River through endless redwood groves. It’s impossible not to notice the beautifully maintained trails, the sturdy, well-kept bridges and pristine condition of everything. Someone hikes this trail on a regular basis to cut back the bushes and maintain the bridges. Thank you, park employees, for doing that work so that we could have a great hike.

A few miles north of Van Damme is the Mendocino Headlands State Park, which starts at the coastline with a cliff overlooking a set of small islands . The park goes inland at least eight miles, straddling both sides of the Big River. Here’s a photo (top left) of Madeline paddling a canoe up the river from the coast. The river goes through peaceful and protected groves of redwoods, winding past all kinds of avian habitat, river otters and other wildlife. We only made it six miles in before realizing we needed our arm strength to get us back upriver against the tide and wind. Every Californian should be able to experience the same priceless, life-affirming day surrounded by the grandeur of our state’s natural beauty.

Finally, there is the Russian Gulch State Park, the northernmost of the three coastal parks. A sign told us that Russian Gulch was the original home of the Civilian Conservation Corps members who camped out in order to build the trails, bridges and service roads that still constitute the basic infrastructure of the area’s parks. On another gorgeous hike through redwood, pine and fir trees to a beautiful waterfall, we had to appreciate the well-maintained trails, bridges and signage. And then there are the helpful rangers – government employees — who clearly speak with a passion about the parks that can only come from a commitment to the mission of public ownership of key natural resources for the benefit of all. These are the state workers whom conservative politicians and pundits like to complain about. We were glad they were there to help, and to explain and protect the park’s beauty.

We are thankful for our government and for the decently paid employees who dedicate their lives to making sure that all Californians have the opportunity to enjoy our natural resources. The taxes we pay are well worth it.

Donald Cohen is the director of the Cry Wolf Project, a nonprofit research network that identifies and exposes misleading rhetoric about the economy, regulation and government. He is also the chair of In the Public Interest, a national resource center concerned with privatization and responsible contracting.

Related Topics:California State Parks
Up Next