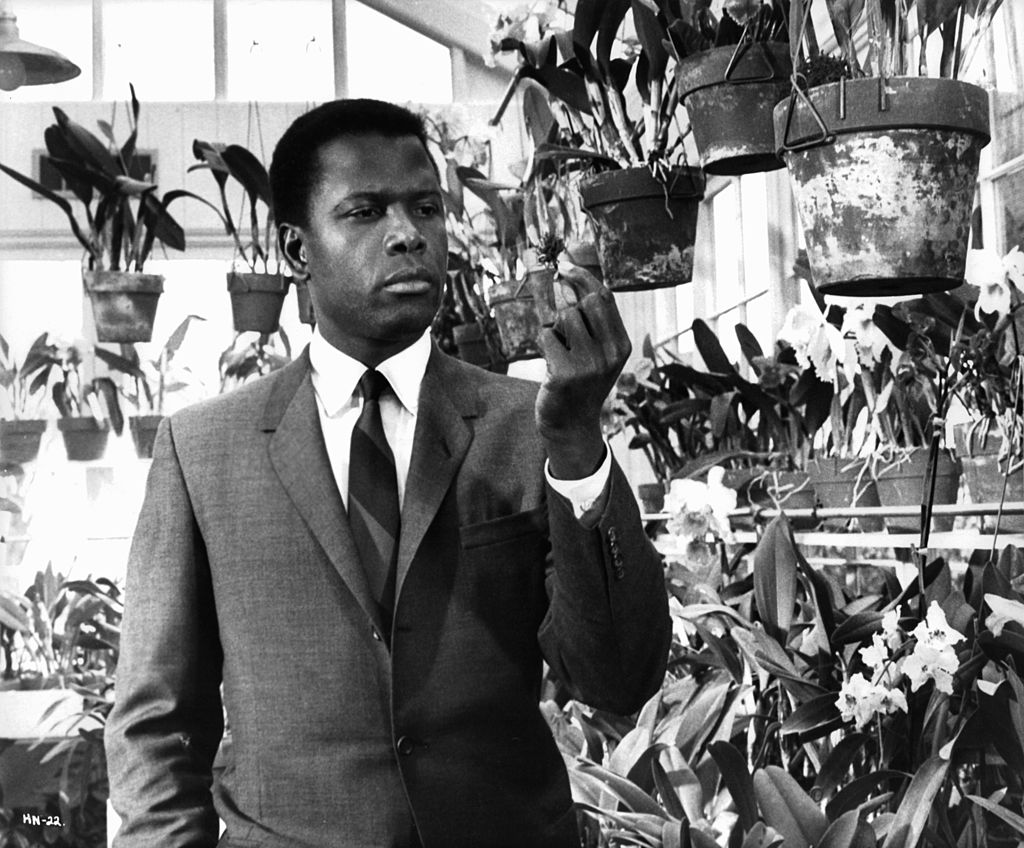 In noir and hard-boiled films of the 1950s, if a person of color was cast, they were most likely a background player; a porter, a maid, a singer. There were exceptions. Sam Fuller’s 1959 film The Crimson Kimono offered James Shigeta in a key role as a Japanese-American LAPD detective, and Mexico City-born Ricardo Montalbán played a Portuguese-American cop investigating a murder in 1950’s Mystery Street. Another exception was Sidney Poitier in 1950’s No Way Out, written by Joseph L. Mankiewicz and Lesser Samuels, and directed by Mankiewicz. As a B film, No Way Out managed to stretch boundaries without pushback from the studio because such low-cost pictures were less scrutinized by studio bosses. It’s a look at race relations in a crime film setting, and the intersection of the issue of race in America and the genre film continued to play out in other Poitier films. It’s not as if Hollywood hadn’t tried to tackle the subject of race before in other types of movies, tepid as those attempts might have been. What No Way Out demonstrated was that in the always-popular format of crime and mystery stories, this volatile amalgam could be engaging and entertaining.

Cast as Luther “Lu” Brooks, Poitier is the first Black doctor hired at the county hospital. Like it was for the actor in real life, Brooks knows he’s under the microscope, and has to be as professional and scrupulous as possible. The pressure of being the one, the stand-in for the race, which is contrasted with the desire to be seen as an individual. Poitier isn’t a noir character in this film — he’s not on the grift, is not cheating on his wife, has no dark secret nor does he meet a doomed fate. It’s an interesting constraint for this groundbreaking actor; he is not free as white counterparts would be to play the antihero. Poitier thought that by being nonetheless a “first,” he would crack that door open for others who came after him, to flex not only in the mainstream, but in these genre films as well.

Brooks’ baptism by fire comes when he’s assigned by the even-handed chief resident (played by Stephen McNally, cast against type as he often played the heavy in crime films and westerns) to the hospital’s prison ward. There he must tend to the wounded petty thieves Ray Biddle and kid brother Johnny. Brooks concludes Johnny is suffering from more than a bullet in his leg, suspecting a brain tumor. Richard Widmark’s Ray Biddle racially taunts Brooks as he examines the hoods. Displaying stoicism with rage roiling beneath the surface, a characteristic that would become one of Poitier’s hallmarks in later films such as In the Heat of the Night, he ignores the crook to do his job. The N-word is freely bandied about in the film like it was a primer for a Tarantino script. Johnny dies, the brother insisting Brooks was at fault. A later autopsy exonerates Brooks, but, as in modern times, racist notions trump science.

Matters come to a head and the hardscrabble white denizens of the Biddle brothers’ Beaver Canal plan to invade the Black section of this unnamed metropolis to avenge Johnny. Lefty Jones, the scar-faced elevator operator in the hospital, tells Brooks of the planned attack. The viewer expects Brooks to not condone such insurgent militancy, which he doesn’t, but significantly he doesn’t go to the police either. He’s no snitch and the subtext being if the cops did show up, they’d only gang up on the Black citizenry.

Lefty organizes a counterstrike with military precision, and the African Americans ambush the ambushers. This is a rare celluloid victory where Black folks defeat the would-be white rioters. No destruction and slaughter as has been depicted on screen (Watchmen and documentaries) of, say, Tulsa’s Greenwood section.

Toward the end when Brooks has gotten the drop on a wounded Biddle, Edie Johnson, Biddle’s ex-sister-in-law, says she wants the doctor to let him die, that he’s not human. This is another key scene for Poitier. Yes, he projects the righteous anger at this racist who sought to kill him. But not only is he a doctor, he’s also a Black doctor and mustn’t, can’t, succumb to revenge. Here is the burden of the stalwart that Poitier would later riff on as his star rose in Hollywood. Still displaying quiet intensity, he utters, “Don’t cry, white boy, you gonna live.”

In 1957’s Edge of the City, written by Robert Alan Aurthur and directed by the previously blacklisted Martin Ritt, crime and race again collide. Unlike No Way Out, this story takes place during the onset of the civil rights movement. Expectations and awareness are on the rise. Poitier is second-billed as easygoing Tommy Tyler. He works the docks and clashes with old-school racist Charlie Malick (played by the venerable Jack Warden). In this story again, Poitier is a “first,” the only non-white crew boss among many whites. But occupying the rung of a working-class toiler allowed the actor to have more range than the square, uptight Doctor Brooks. Echoing Edie in the previous film, Tommy says Malick is the lowest form of animal life.

Tommy and Malick battle it out, each trying to gut the other with a baling hook. It’s a well-choreographed fight reminiscent of the sort Anthony Mann would mount in his crime films. At one point Tommy gets the upper hand, but because he’s yet again the example, and because he’s no Lefty, he doesn’t bury the hook in that cracker. Malik soon manages to kill Tommy. Lesson learned: Never turn your back on a racist. Poitier is the doomed character this time, his death galvanizing his white buddy (played by John Cassavetes) to seek justice for him — a trope played out many times in crime and mystery films over the years.

By 1967 Poitier was now top-billed and exercising his clout In the Heat of the Night, a mystery set in a racially volatile small Southern town. The script originally called for him to be slapped by a rich white man and simply seethe and walk away. In the change Poitier demanded, his Detective Virgil Tibbs, in turn, slapped the shit out of that fool and then checked the drape of his coat.

That swagger led the way for tough-guy Shaft and the antihero drug dealer in Superfly, who, in turn, gave way to slick gangster Stringer Bell in the series about the intersection of crime, race and class, The Wire, then to Denzel Washington’s crooked cop in Training Day, operating in an LAPD where the tone was set by infamous chief Daryl Gates. If Poitier educated white audiences about the humanity of Black folks, he was also, as Washington noted in his 1992 tribute to him at the American Film Institute, “a source of pride to millions of African Americans.” A burden he sometimes chafed under, but didn’t shrug off.

Related Topics:FeaturedracismSidney Poitier
Up Next

The Politics in Our Stars