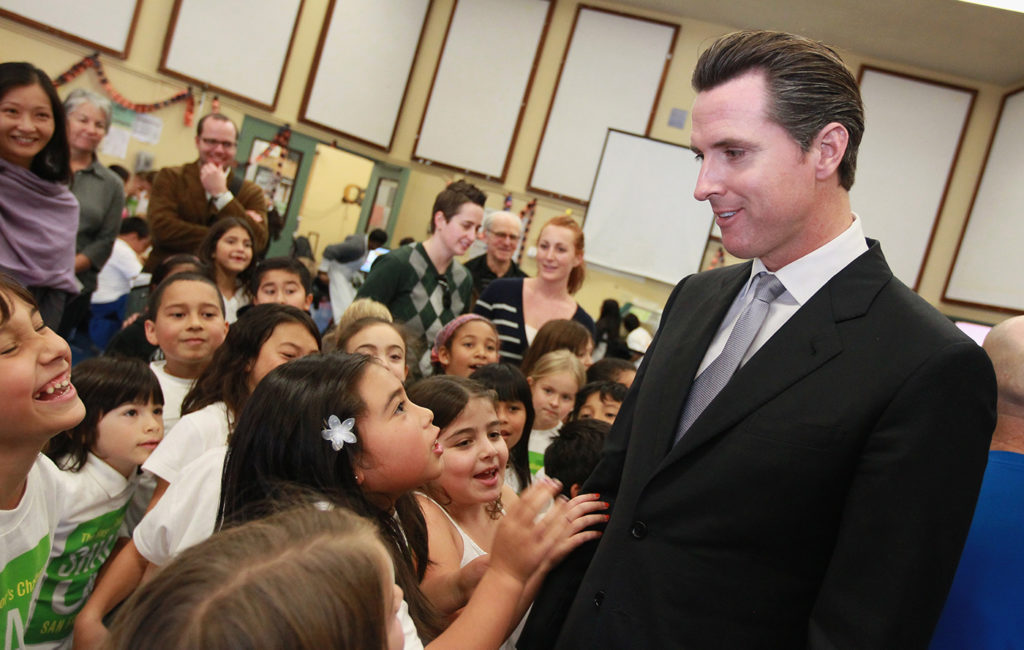 “Learning Curves” is a weekly roundup of news items, profiles and dish about the intersection of education and inequality. Send tips, feedback and announcements of upcoming events to  braden@capitalandmain.com, @BillRaden. Abby Kingsley contributed to this column.

California governor Gavin Newsom racked up significant wins last week when his first education budget sailed through the legislature mostly intact. A minimum increase, mandated by Prop. 98, will bump funding for K-12 and community colleges by $2.9 billion, to $81.1 billion in 2019-20. The best news for the Golden State’s chronically cash-strapped school districts may be the estimated $850 million freed up over the next two years by the $3.15 billion pension obligation paydown Newsom unveiled in January. Also included is spending that emphasizes Newsom’s commitment to early education:

Still pending in a follow-up budget bill is language that would limit the ability of charter schools to cherry-pick enrollment, by banning the requirement of student academic records for admissions and outlawing the “counseling out” of low-achievers and students with learning disabilities.

For higher ed, lawmakers signed off on Newsom’s pledge to keep college tuition flat for 2019-20 and provided money to expand in-state undergraduate enrollments at the 10 UC campuses by 4,860, and by 10,000 in the 23-campus Cal State system. There is also aid for homeless and hungry students, and up to $6,000 for students who are parents of dependent children to pay for tuition and living costs.

One area where Newsom’s spending priorities are out of step with average Californians—not to mention the majority of Democrats vying for the party’s 2020 presidential nomination—is college affordability. According to a policy brief released this week by the nonpartisan research center, Policy Analysis for California Education (PACE), Golden State voters ranked the costliness of attending college as the second most important education concern after gun violence in schools. But with only a modest uptick in Competitive Cal Grants to 41,000—a fraction of the over 340,000 students eligible for the grant in 2017-18—the ed budget proved especially disappointing to advocates for a debt-free future. They had lobbied for a consolidation and major increase in Cal Grant awards, which currently only cover tuition, to also cover living expenses.

BuzzFeed reports that the State of California may shut down River View Christian Academy, a religious boarding school in the mountains outside Redding, after a 2018 BuzzFeed News investigation detailed years of abuse suffered by students, including those suspected of being gay or bisexual. According to court documents, students interviewed by the California Department of Social Services (CDSS) reported that in addition to being barred from talking to each other, touching or being touched by anyone, “misbehavior” at River View drew punishments ranging from being forced to stand outside at night in the cold and the confiscation of bedding to placement on a peanut butter sandwich-only diet for up to six months at a time.

The CDSS is acting on a 2018 law that expanded California’s Community Care Facilities Act to include private alternative boarding schools. That law requires facilities to be licensed and those that operate behavior modification programs to have staff trained in LGBT sensitivity. River View Christian Academy’s owner, Phil Ludwig, is countersuing, claiming the law violates the school’s religious freedom to be anti-gay. River View is being represented by Pacific Justice Institute, a religious freedom and parental rights activist law firm that the Southern Poverty Law Center designates as an anti-LGBT hate group.

Harsh disciplinary practices are also at the center of a California Bureau of Children’s Justice investigation of Butte County’s Oroville City Elementary School District. At issue is a suspension rate three times the statewide average. According to a January EdSource analysis, Oroville’s African-American students were 70 percent more likely to be suspended than their peers, and 2018 findings by the UCLA Center for Civil Rights Remedies indicated that  more days were lost to suspensions on a per-student basis in Oroville than in all but three California districts during the 2016-17 school year. Research has shown that exclusionary discipline can be especially damaging to adolescents, is associated with a higher school dropout rate and failure to graduate on time, and can lead to an increased likelihood of contact with the juvenile justice system.