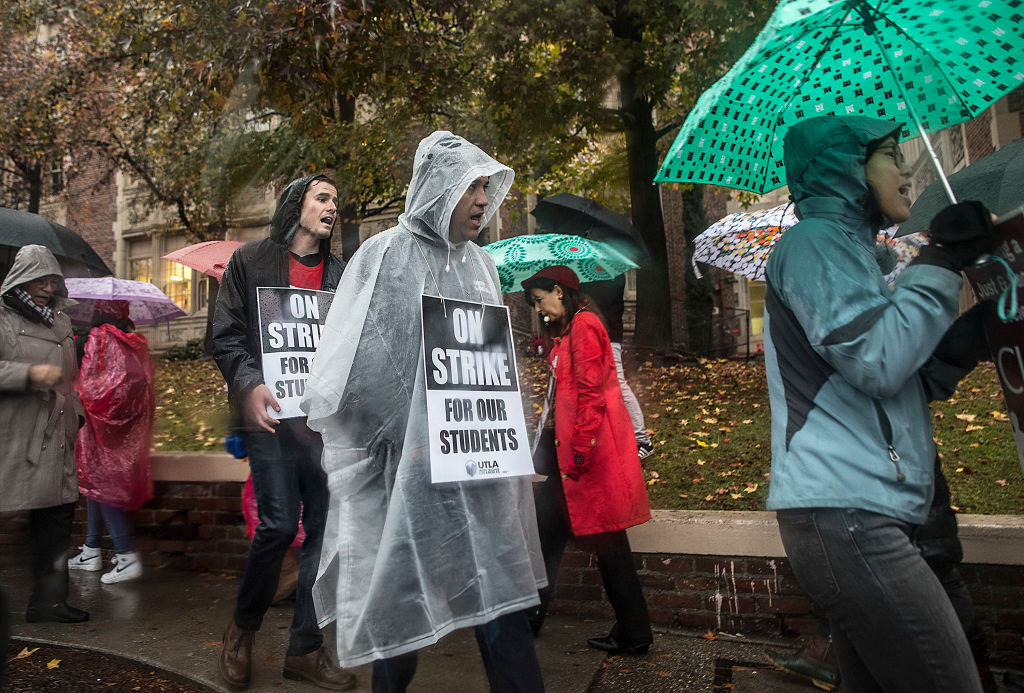 On January 21, 2019, Erika Jones pulled an all-nighter in Los Angeles Mayor Eric Garcetti’s press office. The elementary school teacher had been sequestered there for days as part of the United Teachers Los Angeles (UTLA) bargaining team, which was then negotiating on behalf of 30,000 striking teachers with the Los Angeles Unified School District (LAUSD). Jones and others did yoga and played chess to stay awake. After six days of the strike, an agreement was finalized on the morning of the 22nd: Class sizes would be lowered and capped; nurses, librarians and counselors would be hired; and teachers would get raises. “I actually don’t remember seeing the sun until we walked in for the press conference at 9 a.m.,” says Jones. “That’s when I realized, ‘Oh my god, it’s the next day.’”

But over a year later, Jones is having trouble sleeping again — she says she gets just four restless hours a night and that the bags under her eyes are sinking. On May 14 California Gov. Gavin Newsom announced a state budget that would cut the Local Control Funding Formula (which is used to distribute money to public schools) by 10 percent, and Jones now worries the progress she fought for will be undone. According to a Zoom presentation put together by the Education Coalition (a group of statewide associations representing teachers, administrators, school employees and districts that addressed reporters at a May 28 briefing), the cuts will mean roughly 57,000 teacher layoffs in the state, 125,000 nonteaching employee layoffs and class-size increases of 19.1 percent. (When contacted by Capital & Main, the governor’s office declined to comment on the coalition’s estimates.)

For teachers who lived through the 2008 housing crash and the austerity that followed, Gov. Newsom’s budget brings a sense of déjà vu.

California Teachers Association President E. Toby Boyd said the state Senate’s alternate plan would prevent immediate layoffs and keep class sizes relatively stable, but would only “kick the can down the road.” (Disclosure: The CTA is a financial supporter of this website.)

For teachers who lived through the 2008 housing crash and the austerity that followed, Newsom’s budget brings a sense of déjà vu, though the state’s current $54 billion deficit is even larger than its deficit following the crash. Michael Griffith of the Learning Policy Institute told the Philadelphia Inquirer that COVID-19 cuts to education across the country could double the 8 percent reductions to education budgets made nationally during the Great Recession, and a 15 percent cut with no additional federal relief would result in 300,000 teaching layoffs — triple America’s teaching layoffs from the 2008 recession. According to Griffith, a 20 percent cut would mean roughly 460,000 layoffs.

Los Angeles school board member Jackie Goldberg believes some of last year’s contract may be dismantled and says that LAUSD could not afford to reopen safely even before any cuts. “I hope by the time they get an August budget they realize there ain’t no goddamn schools opening!” she says.

Noriko Nakada, a teacher at Emerson Middle School in L.A.’s Westwood neighborhood and a UTLA chapter chair, says recessionary cuts were what led to last year’s strikes in the first place: “2008 was when we lost all our nurses and all of our librarians, and class sizes started to swell,” she says. “What do we do if our class sizes are already huge? And we don’t have librarians? And we don’t have nurses?”

Before the strike, the number of students in Nakada’s classes had ballooned into the high 40s. This year her average enrollment dropped into the high 30s, but in the early days of the current distance-learning regimen, Nakada taught 100 students at a time on Zoom.

While the school board cannot unilaterally back out of the 2019 contract, says Goldberg, changes to the budget are certain, and UTLA and other unions may have to make hard choices in further negotiations with the district if worst-case scenarios, like layoffs, are to be avoided.

Former school board member David Tokofsky questions why Gov. Newsom and others are not more actively campaigning for the Schools and Communities First Act, which is on the ballot in November and would close property tax loopholes for corporations. Conservatively, the initiative would generate $4 billion in revenue for K-12 education and $400 million for LAUSD, he claims.

The Schools and Communities First Act, which is on the ballot in November, could generate $4 billion in revenue for K-12 education.

Tokofsky also points to potential money in the federal CARES Act law and pending HEROES bill, in the United States Department of Agriculture and in Proposition 63 funds set aside for county mental health programs, as COVID-19 is increasingly considered a mental health crisis. “It’s easier to motivate by fear than to organize,” he says. “Don’t mourn, organize — and there’s enough to organize between now and President Biden that will make a difference for poor children, union members and key institutions.”

According to Goldberg, the state owes LAUSD $199 million for COVID-19–related expenses, and the district has received no confirmation the money will be repaid. LAUSD spent $96 million alone on providing lunches to children during the quarantine, and the district has identified funding for only $58 million of it, while an additional $40 million spent feeding adults has no identified source of funding at all. LAUSD Superintendent Austin Beutner and the board made the decision to feed adults as well as children when lunch handouts began, according to Goldberg, believing state or federal reimbursement from the Trump administration would eventually arrive.

“I think it was a good guess,” Goldberg says. “I really do believe there are people in Sacramento, and even some Republicans in Washington, who think that hungry people should eat.”

Of the $95 million it cost to equip students to learn from home, connecting them with Wi-Fi and providing them with smart tablets and laptops, the district can only locate $72 million in funding — a $23 million debt.

“We have a lot of the same leadership at UTLA, and they know how to [organize a strike],” she says. “I don’t know how soon, but if our hands are really tied, I don’t think people would see it as out of the question.”

But Goldberg disagrees. “I don’t think there will be any strikes. I think everybody is pulling together.”