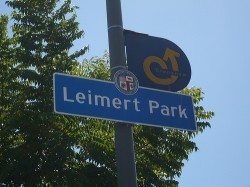 Growing up, I saw Leimert Park as our version of Harlem: the center of commerce, music and culture for the African-American community in Los Angeles. The last time I was in Leimert Park, I saw shuttered storefronts and empty sidewalks — a stark difference from the hustle and bustle I knew from growing up not far from there. I am sure that it is even more of a shock for the generations of Crenshaw residents before me.

We now have an opportunity to revitalize this once economically thriving community, though, via the Crenshaw/LAX Line, a $1.8 billion light-rail project expected to start construction in early 2014. There is a catch – a Leimert Park station, which would be the crown jewel of the line, is startlingly missing from current plans. There needs to be a Leimert Park station.

Last May, community residents and advocates packed the Metro board room in hopes of hearing good news about the inclusion of their community in the proposed stations. Instead, they got a plan where the devil was in the details.  This nicely designed brochure produced by Metro outlines the community’s bleak options:

There is some good news: The contractor responsible for building the overall Crenshaw/LAX Line will be subject to the Construction Careers Policy—requiring that 40 percent of the project be built by residents from economically disadvantaged communities. This will make sure folks can work on the construction of the Crenshaw Line from low-income communities like South Los Angeles.

Naturally there are concerns, too: We need to ensure that the businesses that are the heartbeat of Crenshaw thrive during and after the construction of the project. And a new opportunity is emerging to make that possible — once we make sure that a Leimert Park station will be built.

Since the dissolution of redevelopment agencies, local residents have lacked the resources to incentivize sustainable development and more walkable, revitalized communities. This could change with the reintroduction by State Senator Darrell Steinberg of a proposed law (originally SB 1156 and now SB 1 in the new legislative session) that would bring good jobs and affordable housing to our communities and help us meet pollution and emission reduction standards, by creating a targeted source of funding from developers to accomplish these goals. Imagine what is possible for South Los Angeles if we have these tools at our disposal.

We believe that the new mayor of Los Angeles will have to address the Leimert Park Station controversy in the immediate future. Community outrage over the exclusion of Leimert Park is too significant to ignore.

If a station is added, it will create a nexus for supporting existing businesses, with more visitors taking transit and walking around Leimert Park Village, and more career-path jobs that the community can access, truly highlighting one of our most cherished communities in Los Angeles.

Retiring the Debt by Ending Retirement