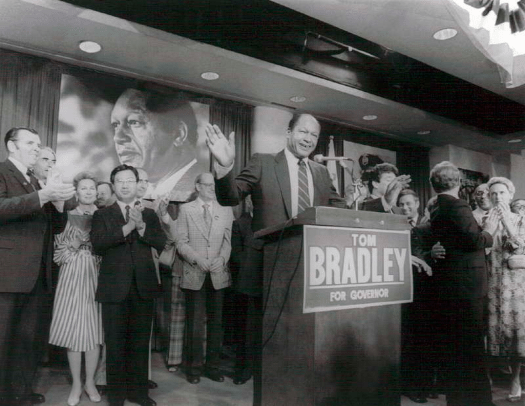 Any informed discussion about the politics and history of Los Angeles over the last century would have to include a critical assessment of the life and legacy of Tom Bradley. In the new documentary Bridging the Divide: Tom Bradley and The Politics of Race, filmmakers Lyn Goldfarb and Alison Sotomayor provide an in-depth look into Bradley’s life and career and their lasting impact on the city’s history, culture and political life. The two recently spoke with Capital & Main.

Capital & Main: What were your main reasons for doing this documentary?

Goldfarb: Because many of us don’t have a clear understanding about the history of Los Angeles. I think Tom Bradley’s story helps us understand LA better, who we are, and how we got to where we are. Sotomayor: When Tom Bradley became the first African American mayor elected in a major U.S. city with an overwhelming white population, it was a remarkable, political first in the history of race and politics in America.  Bradley’s story resonated with me as it had elements of a dramatic and inspirational film; it was a story of triumph and tragedy, courage and community. Before Barack Obama, there was Tom Bradley. We believed that Bradley laid the foundation for the election of President Obama, and that Obama-Bradley link had yet to be widely acknowledged. Therefore, our quest to renew and reignite interest in Tom Bradley and to keep his legacy at the forefront became even more pressing.

C&M: How long did it take to complete the research?

Sotomayor: We immediately began researching for the film in 2008 – the moment we decided we were going to produce the documentary – and it literally did not stop until we completed editing the film in the June 2015.   It took seven, long years, writing dozens of funding proposals, researching at nearly 50 archives locally and nationally for content and visuals – both stills and footage, amassing a large collection of primary and secondary sources, and conducting more than 135 pre-interviews in the field with people who knew Tom Bradley as far back as the late 1930s. We believe our collection of Bradley materials (stills, footage, audio, textual documentation) is the most complete archive of all things Tom Bradley outside UCLA’s Special Collection of Tom Bradley’s Administrative Papers.

We conducted a tremendous amount of original research over the years at universities, community colleges, libraries, museums, the Bradley family, and simply asking a wide variety of people to unearth materials from their own private collections and garages.

During this time, we also gained incredible access into collections, which at that time, were either untouched or in the early stage of being catalogued and processed, such as the never-before-seen LAPD Historical Collection at the Los Angeles City Archives, The Tom & Ethel Bradley Center’s African American Photography Collection at Cal State University, Northridge, and the Mayme A. Clayton Library & Museum. A significant amount of visual research occurred at the network footage archives, small footage houses locally and nationally, the Los Angeles City Archives, the Tom Bradley Legacy Foundation at UCLA, the California African American Museum, UCLA’s Special Collections, USC Libraries Special Collections, and the Los Angeles Public Library. We also regularly consulted and collaborated with our scholars on themes, issues and perspectives of the film, and held a number of lengthy meetings with them either in person or by phone. Our academic scholars, led by Raphael Sonenshein, executive director of the Edmund G. “Pat” Brown Institute for Public Affairs at Cal State University, Los Angeles, and Christopher Jimenez y West, Assistant Professor of History at Pasadena City College, provided an insightful and provocative exchange of ideas and information, which ultimately broadened and illuminated the humanities context for the film.

C&M: In doing the research and the interviews, did you find out anything about Mayor Bradley that truly shocked/or surprised you?

Goldfarb: One thing we were surprised to learn is that LA was truly a multi-ethnic city from the beginning. When we looked in depth into Bradley’s story starting with where he grew up, the issues of race, restrictive covenants, etcetera, it made his accomplishments even more impressive. One of the things that always surprised me is when he decided to run for mayor in 1969 in a white city, right after Dr. King and JFK were assassinated. He was doing the right thing by running. Of course he didn’t win in ’69 because Sam Yorty used fear, racism and red-baiting to win the election.

Sotomayor: We were amazed that in 1969, at a time of great political and social turmoil and protest through the nation, and a year after the assassinations of Dr. Martin Luther King Jr. and Robert F. Kennedy, that Tom Bradley, an African American Los Angeles city councilman and former cop, believed he could win mayor of Los Angeles in a city whose black population was no more than 18%.

C&M: What do you think were Bradley’s most significant accomplishments?

Goldfarb: He changed the city. When he was elected in 1973, Los Angeles was still very much a provincial white city. It was Bradley who transformed the city into a major cultural and economic powerhouse, with things like the LAX and Port expansion. 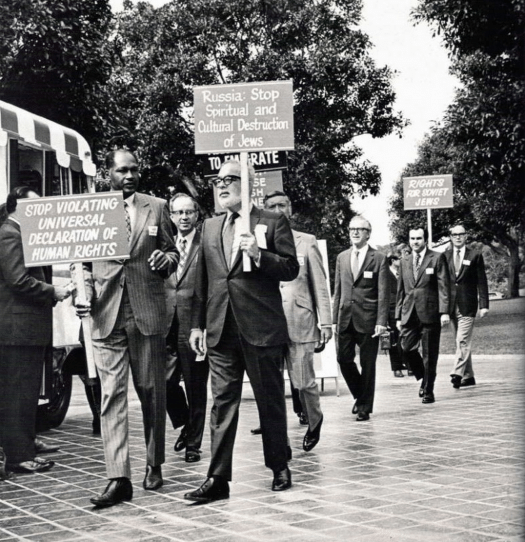 Sotomayor: He had the ability to build bridges across the divide: to create and sustain an extraordinary coalition of African Americans, Jews, white liberals, Mexican Americans and Asian Americans throughout most of his tenure as mayor. He opened up powerful city board and commission positions to minorities, progressives, women and the disabled, largely for the first time. And he transformed Los Angeles into a “World Class” city.

C&M: What do you want the public to walk away with after viewing this film?

Goldfarb: I want people to understand the potential for positive change in the city, especially with the difficulties of implementing change now. One example is the police department. Bradley had been in the LAPD for 21 years, he left, and he really wanted to change the department, which at the time was under the complete control of Bill Parker. They fought him every step of the way, they couldn’t stand the fact that a black man was mayor. After the civil unrest there have been important changes. The biggest since Bradley was Mayor is that the department is now under civilian control.

Sotomayor: Because Tom Bradley’s story raises important issues about race and building bridges over racial divisions, we felt an enormous responsibility to produce a film that became an important springboard for dialogue and reflection about racial and ethnic tolerance and long-term relationship building; how can we understand where we are unless we know where we have been? So my hope is that through this story, audiences will better understand themselves and the growing numbers of diverse people around them, and through deep conversations about race, the idea that bridges can be built and offer hope – that people can coalesce, leading to a deeper sensitivity and understanding of the whole community.

Bridging the Divide: Tom Bradley and The Politics of Race will be broadcast on PBS SoCaL (KOCE) August 18 at 8 p.m.

Join the filmmakers for screenings and discussions to be held around the Los Angeles area next week:

August 11 at Laemmle Playhouse 7 in Pasadena at 7:30 p.m. followed by a Q&A. Tickets available at the box office.

August 12 at Laemmle Music Hall in Beverly Hills, sponsored by the Los Angeles Jewish Film Festival, at 7:30 p.m. followed by a panel. Tickets.

August 13 at Laemmle Town Center in Encino at 7:30 p.m. followed by a Q&A. Tickets available at the box office.