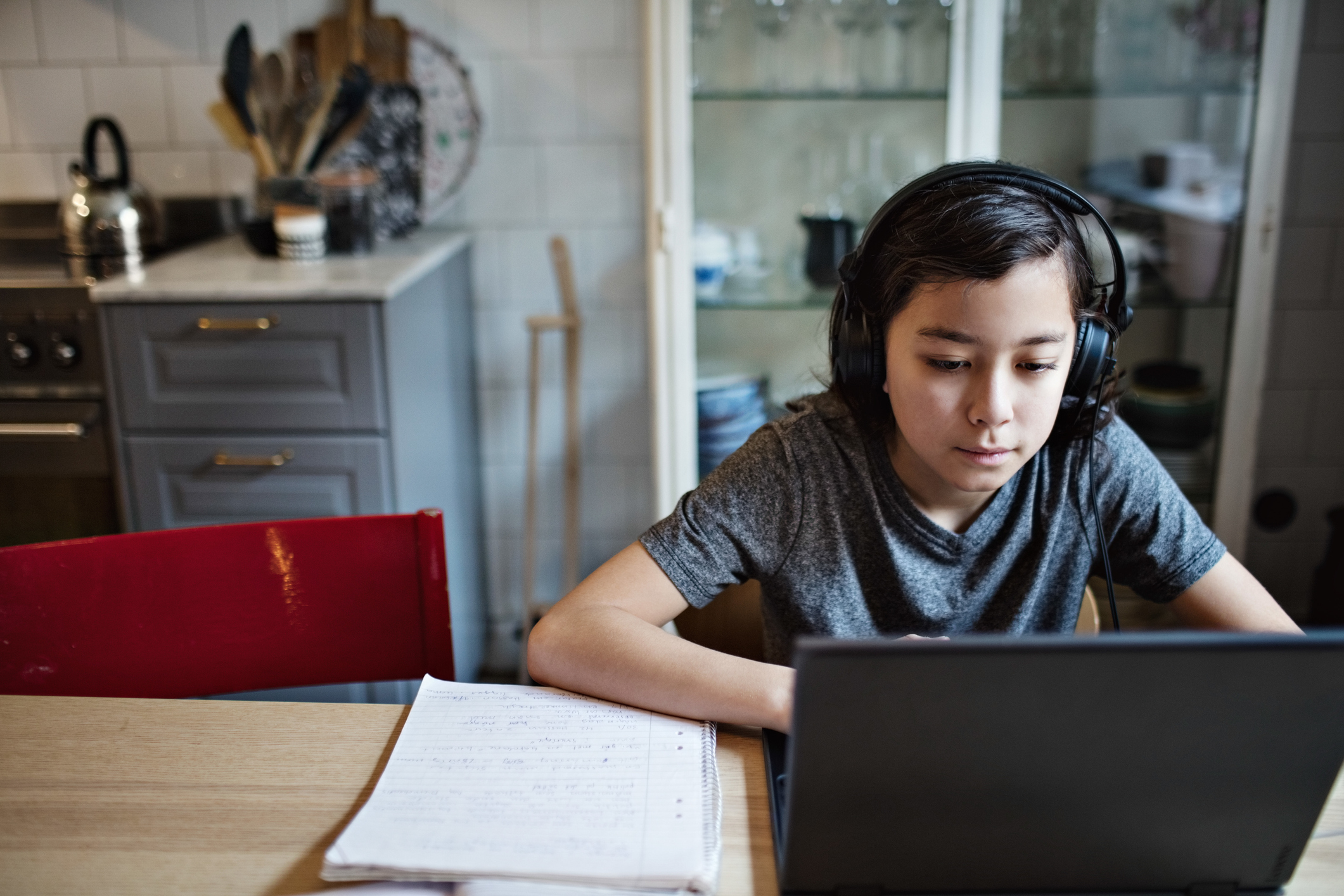 Luis Coronado, a factory employee from Huntington Park, was injured on the job at a paper products company and unable to work when the COVID-19 lockdown began. His wife lost her job too, and the family gave up their cable and internet subscriptions to save money. “The pandemic hit us bad,” Coronado said.

He was suffering from a dislocated shoulder and torn bicep while his 9-year-old fourth grader struggled with online lessons. “He was lagging. He was not paying attention to the classes.” And even when the child could focus on school, Coronado said, the school district-provided hotspot he used to connect to Zoom would often bump him offline.

Thousands of students missed out on learning and have fallen behind in school because they lacked fast, reliable internet. Others couldn’t access telehealth medical or counseling appointments, take advantage of online banking or use the internet to search for work or apply for social services.

Eighty-four percent of Californians were online in 2019, the Public Policy Institute of California (PPIC) reported in 2021, but in some communities, broadband subscription rates are far lower. For example, in the heavily Latino city of Huntington Park, where Luis Coronado lives, 21% of residents don’t have access to the internet, according to U.S. Census data compiled by L.A. County. The data shows more than a quarter of Watts residents are unconnected.

“In urban parts of L.A., affordability is really tough for high speed reliable service, and those are areas we are focused on trying to support.”

The pandemic made plain that poor people of color had been left overwhelmingly on the wrong side of the digital divide, and suffered disproportionately because of it. In 2021, after years of hand wringing over the issue, elected officials took action. Congress allocated $65 billion in infrastructure funding to digital access, some of which is available to states and localities through competitive grants. The funding could unleash a flood of new projects. The California state Legislature approved a plan to use $6 billion of those funds to connect residents who are unserved or underserved by their internet providers, and local city and county officials are making plans to create their own networks.

Steve Hargis, chief information officer in the Riverside County city of Moreno Valley, is planning to establish free Wi-Fi throughout the city. “Our residents can’t fully participate in society if they don’t have a connection.”

L.A. County is devising a pilot project to connect some 12,500 households to its own wireless network. “In urban parts of L.A., affordability is really tough for high speed reliable service, and those are areas we are focused on trying to support,” said Selwyn Hollins, L.A. County Internal Services Department director and the project’s point person. Last fall, the county ran into opposition from those who argue network creation and management is best left to the private sector. But, Hollins stressed, the county seeks a public-private partnership. The county took a first step March 21, releasing a request for qualifications for companies who could connect the unconnected in seven L.A. County communities from Watts to Panorama City.

“The current infrastructure resulted in young girls sitting outside a Taco Bell in Salinas, just trying to get a signal for school.”

The largest and arguably most consequential project is the state’s $6 billion Middle Mile Broadband Initiative, which includes $3.25 billion to build an open access fiber optic network. In internet terms, the “middle mile” refers to high speed, high capacity cables that allow local service providers to connect homes and businesses to the global internet. “Open access” means the state will allow any company or organization to tap into its network at reasonable rates to connect underserved communities. The state also plans to spend $2 billion to fund projects that would make “last mile” connections between high speed lines and people’s homes. It will establish a fund to help municipalities finance their broadband projects and allocate money for broadband deployment in housing projects and on tribal land.

Currently, companies such as AT&T, which provides broadband internet in most of the state; Charter Spectrum and Cox Cable in Southern California; and Comcast Xfinity in the northern part of the state dominate the market in large part because they control the cables and wires that power the internet, argue digital equity advocates.

But public infrastructure could allow smaller companies to compete with big telecom.

“The current infrastructure resulted in young girls sitting outside a Taco Bell in Salinas, just trying to get a signal for school,” argued Chao Jun Liu, a legislative advocate with the Bay Area-based Electronic Frontier Foundation, at an Assembly oversight hearing in February. “If we build and build boldly that will never happen again.”

Capital & Main is launching a new reporting project to explore how the digital divide has widened the inequality gap — in education, health care and job opportunities. In a series of stories, we will track the battle to come between big telecom and localities as public sector competitors set out to connect the unconnected. We’ll investigate how just a few giant companies became the internet’s all-powerful gatekeepers for U.S. customers, how that has affected Southern California customers, and whether state and county efforts to create their own networks will lessen their control.

In 2021 the state Legislature approved with a unanimous vote its $6 billion middle mile plan to create a broadband network to connect all Californians.

Digital inclusion advocates argue the telecom companies were able to fend off competition when the Federal Communications Commission deregulated the industry during the George W. Bush administration in the early 2000s. Instead of more choice and lower rates, most consumers were left with internet monopolies or duopolies because big telecom companies were no longer required to share their networks with smaller would-be competitors at reasonable rates, the digital inclusion advocates contend.

The California middle mile initiative is aimed at creating opportunities for new internet service providers to spring up. If it’s successful, it could facilitate more affordable access to the internet in areas that are currently underserved.

In 2021, more than a year after the pandemic began, the state Legislature approved with a unanimous vote its $6 billion middle mile plan to create a broadband network to connect all Californians. State disclosures show AT&T, Charter Spectrum and the California Cable and Telecommunications Association collectively spent $3.6 million on lobbying last year, including on the state’s plan. But they didn’t publicly oppose it.

The industry trade group the California Cable and Telecommunications Association even announced its qualified support, backing the idea of bringing internet access to the unserved.

But the group, along with its member companies, doesn’t put urban dwellers who can’t afford access in that category.

One of the first 18 sites where the state plans to begin building its high speed internet infrastructure is a stretch of South Los Angeles County near Compton and Bellflower and along the 710 freeway near working class, predominantly Latino cities like Bell and Huntington Park, an area where broadband subscription rates are considerably lower than the county average.

In comments filed with the California Public Utilities Commission, Charter Spectrum, which serves the area, contends 99% of area residents can access the internet.

Nineteen percent of households in the city of Bell don’t have internet access, compared to 13% of L.A. County households as a whole.

“They’re not wrong” in saying the infrastructure exists, said Ernesto Falcon, an attorney with the Electronic Frontier Foundation. But the telecom companies control the infrastructure, and he said the key questions are “What do they charge? Is access open? It’s true to say we have infrastructure, but it’s not at a good price.”

Falcon argues the companies simply oppose competition. But he said they are unlikely to be able to change the state’s $6 billion plan. “I think there is a strong hand to keep the law as structured.”

“Charter has a longstanding commitment to increasing connectivity,” said spokesman Dennis Johnson in an email to Capital & Main. He argued that the federal American Connectivity Program offers a solution in the form of a $30 per month broadband subsidy for low income customers. The company offers a $17.99 per month internet plan for customers that qualify for the subsidy.

None of the giant telecom arguments over the best ways to connect the unconnected were aired on a recent Saturday morning in March as Charter Spectrum joined state and local officials for a “digital inclusion event,” a party at Treder Park in Bell, population 35,000. Nineteen percent of the city’s households don’t have internet access, compared to 13% of L.A. County households as a whole.

The company sought to establish its digital equity bona fides on its own terms with a giveaway of 40 Chromebooks, provided by the non-profit EveryoneOn, along with tacos, cupcakes and corporate swag. It presented EveryoneOn, which helps train local people in digital skills, with a supersized replica of a $20,000 check and promoted its own low income broadband plan.

Speaker of the Assembly Anthony Rendon, who represents the area, and Assemblywoman Cristina Garcia, who is running for Congress, spoke as several dozen people — most with kids in tow — listened politely before lining up to collect their laptops.

Luis Coronado snagged one of the Chromebooks for his wife. He is back online, and paying $120 a month for combined cable and internet access.

“It connects good sometimes and then it goes away,” he said. “It goes in and out.”

Coronado and his neighbors in Southeast L.A. could be among the first to see whether California’s digital experiment will improve internet service and lower prices.

This story has been updated to clarify the role of the nonprofit EveryoneOn in donating Chromebooks at a recent event.