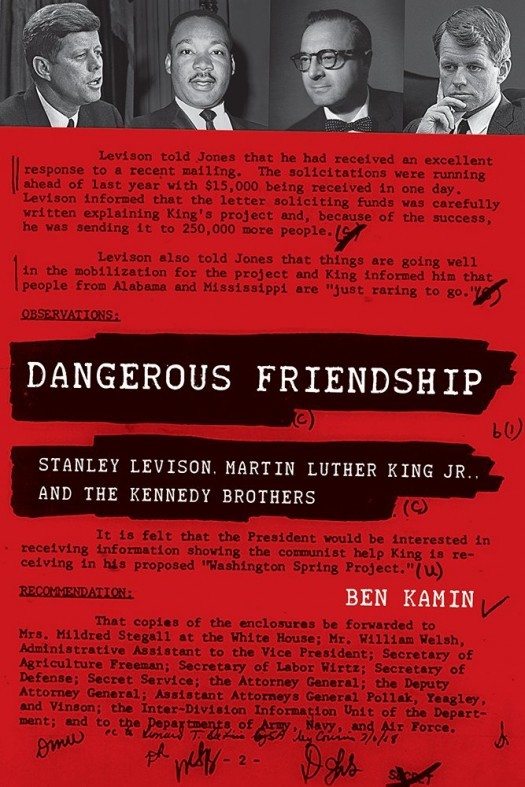 Levison was a successful Jewish businessman and member of the American Communist Party until 1956, when the Soviet invasion of Hungary left him disillusioned. He refocused his organizing skills, business and labor contacts, energy and intelligence to support the work of Martin Luther King Jr., helping to found, manage and fund King’s organization, the Southern Christian Leadership Conference. In the process, Levison became an intimate friend of King and part of the tight circle of confidants who helped develop King’s campaigns and sustain him emotionally.

What drew Levison, and hundreds of other American Jews like me, to the 1960s African-American civil rights movement is a topic for psychological exploration. Perhaps, deeply conscious of the recent genocide of Jews in WWII Europe, we were searching for allies in America who had a similar fear of annihilation to bond with. Or possibly we wanted to show ourselves we had the courage to stand up to Southern racism that focused its wrath primarily on blacks, Jews and Catholics. Whatever the origin, the motivation was strongly felt by Stanley Levison.

But J. Edgar Hoover had strong feelings too — against King and the racial justice movement then sweeping the country. In particular, he wanted to keep King from gaining support for his agenda from President John Kennedy and his brother Bobby, the Attorney General. To create a rift he used Stanley Levison and his former communist affiliation. Hoover’s FBI used countless wiretaps to try to catch Levison engaged in Communist Party activities. He never could, but didn’t let that stop him from telling the Kennedys that Communist influence was being exerted in the civil rights movement and that they needed to withhold their support of it. Hoover’s surveillance did turn up some of King’s trysts with women that Hoover used to great advantage in besmirching King’s reputation. Eventually King had to discontinue his contact with Levison as a condition of Kennedy support.

Kamin’s book draws on interviews with other top King intimates, including Harry Belafonte and attorney Clarence B. Jones, to give the gut feelings of those days of heady accomplishment but also searing anti-black violence and fear. King himself suffered terrors about his own death, especially after John Kennedy’s assassination in 1963. While sometimes repetitive and suffering from sloppy editing, Dangerous Friendship nonetheless provides a sense of how the early civil rights movement worked.

Martin Luther King Jr. didn’t build a movement by himself but relied on a tiny coterie of talented and brilliant people to plot his strategy and sustain his effectiveness. These people developed relationships of deep trust and mutual devotion to King and to the movement. Among that group was a Jewish businessman and former communist who dedicated his life to racial justice. That’s a bit of history that deserves to be known.

Harold Meyerson Speaks on ‘Inequality for All’