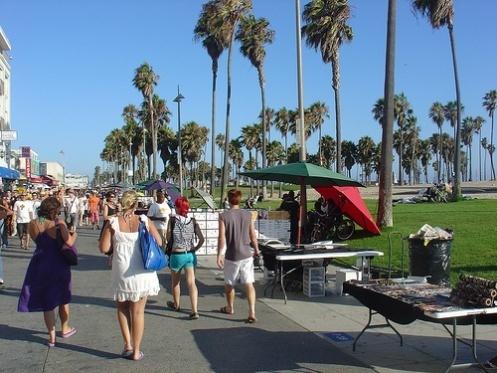 Whenever a friend visits from out of town I take them for a stroll down Venice Beach where the diversity of Los Angeles is on brilliant display – tattoo diversity, mental health diversity, “beachwear” and performance diversity, amongst many forms of human heterogeneity. Often we’ll pick up a $5 ring or necklace from one of the vendors, or a salt-and-pepper shaker shaped like lovers in a big hug — or beaded wind chimes that seem so charming in the light of a bright Southern California afternoon.

But on a stroll last weekend I learned that the times are a-changing on Venice Beach. This Friday a card table jewelry seller with 14 years seniority told me that every non-artist will be denied a sellers permit, in order to limit economic competition with nearby permanent stores.

The debate about who should be able to sell their wares on Venice Beach has been going on for decades. And I’m not saying that I’m against limiting permits to artists who make their own products (although I don’t envy the person who gets the job determining whether an airplane made out of old Coke cans is art). But I am worried about the closing up of all avenues to those trying to survive at the economic margins of our society.

As recent history has shown, regulation of the large financial institutions, banks and mortgage lenders has been woefully weak and has led, in some cases, to the economic downfall of many middle class families. Yet, at the same time, we seem to be beefing up regulation of the small guys and gals at the bottom of the heap who struggle to survive without a steady paycheck.

If the middle class is disappearing (and not likely to grow again for many years) while government benefits are cut further, and the super-rich are making more than ever, we must make room in the economy for people to survive. If we are becoming a Third World economy, shouldn’t we allow for the survival mechanisms that Third World countries have provided for low-income entrepreneurism?

And that gets us back to the card table jewelry vendor on Venice Beach, the fruit and juice sellers on urban corners, and the parking lot barbecues. Everyone wants to survive with dignity, to use their ingenuity, hard work and persistence to support their families. If we outlaw all productive avenues for work, what will the alternative be in Los Angeles for struggling families?

Hippocratic Oath or Oath of Hypocrisy?