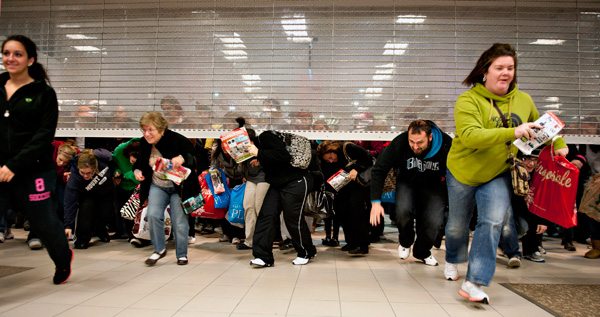 Black Friday may be a distant memory already, but as we head deeper into the holiday shopping season, there are some important lessons to be learned about the psychology of marketing and the real cost of bargain hunting.

Here’s a cautionary tale from my own life: One year on the day after Thanksgiving, my uncle, a tech geek, woke my brother and me up at an ungodly hour to get to Fry’s Electronics by 5 a.m. The doors opened at 7 a.m. Despite us ending dinner early, waking up before the crack of dawn and standing around in the dark for hours, most of the deals had already been whisked off the shelves by the time we got in the door. We wandered around a store so crowded it bordered on unsafe before finally buying some gadgets just to feel like we hadn’t wasted our time.

This year, as the recession continues, retailers pushed Black Friday even earlier, into Thanksgiving. Retailers were already banking on budget-conscious customers willing to wait in long lines for deals, but by starting as early as 9 p.m. Thanksgiving night, retailers were expecting that people would even sacrifice spending the holiday with their families.

By all accounts, Black Friday (a name derived from the fact that retailers can make so much money this one day that it can help put their bottom line in the black) was a success for retailers. But as I listened to reports of the Black Friday insanity – a pepper spraying incident at Walmart, customers breaking into an Abercrombie and Fitch, a shooting robbery of a man in the middle of the night – it just hit me as utterly depressing.

Given the financial situation that all too many families find themselves in I can’t blame anyone for wanting to save money. For the average consumer, however, the math doesn’t always work out. In many instances, both workers and cities lost out.

Retail workers, who often work evenings and weekends, rely on holidays to enjoy vital family time. The decision of Target to ask its employees to report for work at 9 p.m. Thanksgiving Day prompted an online petition asking the company not to rob workers of time with their families. Additionally, cities had to deploy extra police to provide crowd control, ease traffic congestion and, in the worst cases, investigate violent crimes and property damage. Ironically, the cost to the public of this increased safety prompted one economist to suggest taxing sales more heavily during Black Friday to discourage this kind of behavior.

Large retailers of all stripes are psychological wizards. They create a false sense of scarcity and unnecessary competitiveness to get more customers in the door (along with Black Friday, we now have Cyber Monday and Small Business Saturday, newly invented marketing tools to continue the shopping frenzy) and workers to accept less than ideal working conditions.

Maybe the reason this psychology works is because people understandably can’t imagine earning more money; the only way they feel that they can get ahead or stay afloat is to fight tooth and nail for a few limited scraps. But as Christmas nears, we need to think about whether the savings are really worth the cost.