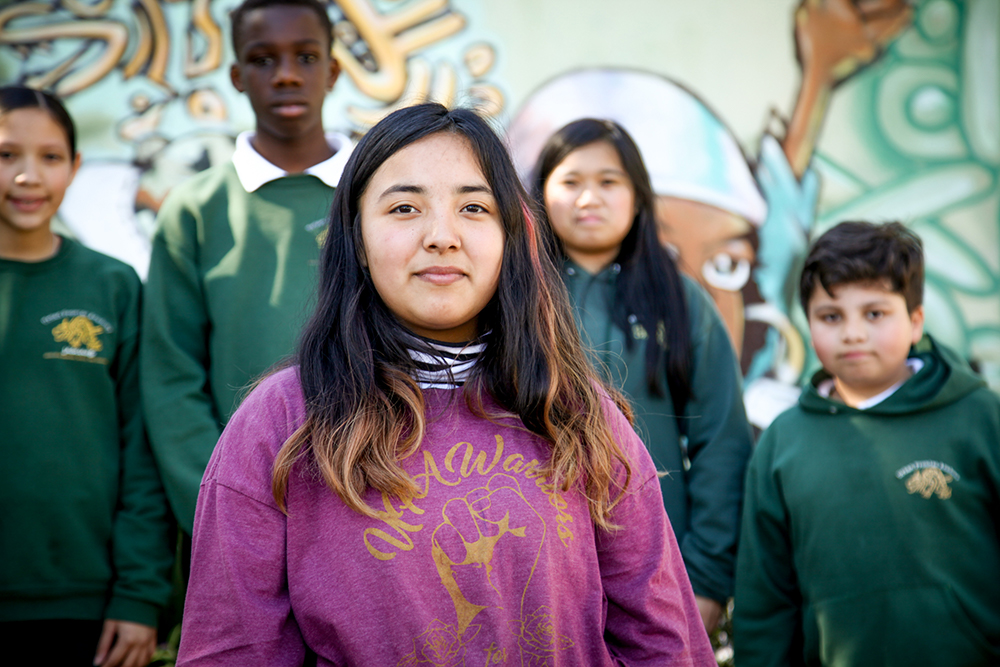 “If I were in her place, I would not be threatened by 12 youths. I’d listen to what they were saying. I’d say, ‘I’ll think about it,’ and I’d leave it at that,” states Samantha, one of the young environmental activists who recently challenged Senator Dianne Feinstein for not endorsing the Green New Deal. Instead of listening, however, Feinstein got testy with the schoolkids, pushed her own, more limited policy proposals and pulled rank on them by noting how many times she had successfully won re-election to the Senate. The kids, in turn, told California’s senior senator that “we’re asking you to be brave” and to support the Green New Deal.

Not surprisingly, footage of the confrontation between the 85-year-old senator and the tweens went viral.

Samantha, who was amongst those present at Feinstein’s office, is a 12-year-old seventh grader who will be part of today’s Climate Strike, in which kids plan to stay out of school to protest governmental inaction on climate change (she asked that her last name, and the name of her middle school, not be used in this article). Extraordinarily politically savvy, she is fast becoming known in the Bay Area for her organizing skills and ability to articulate what is at stake for her generation in the climate change struggles. “I didn’t understand why she [Feinstein] was telling us how many years she’d been in office and how many times she was elected,” she says. “She gave us her own resolution, which we were not very fond of. There were conflicting feelings in that office. She wasn’t following what science said. I’ve read both Green New Deals, and hers has less information.”

Since that meeting, Samantha’s life has been something of a whirlwind. In many ways she is just a regular 12-year-old – she likes hanging out with her friends, singing songs, retelling jokes found online – but her routine is now interrupted by requests for interviews; by people asking her if she has political ambitions; and by invitations to attend conferences and activist workshops.

Samantha will be helping coordinate today’s walkout at her school. The activists will join an expected 1,000 youth from around the region as they convene at House Speaker Nancy Pelosi’s San Francisco office to talk Green New Deal, and then march through the streets to Feinstein’s office. They will be part of a global mobilization of young people participating in a range of climate-related actions.

“I would describe myself as an artist and a writer and a warrior,” says Samantha. “I’m more comfortable saying my opinion because I have something to stand for now.”

As young people around the world increasingly turn to school walkouts and strikes to highlight the urgency of global warming, Samantha, whose ancestry is a mix of Cambodian and Mexican, has found her voice on this truly global issue; and, in turn, local activist groups – her school’s Warriors for Justice club as well as a Bay Area organization called Youth vs. Apocalypse — have found that her voice is a powerful one to have on board.

“I was blown away,” Carolyn Norr, of 350.org, the parent group to Youth vs. Apocalypse, recalled of the essay Samantha wrote, while in 6th grade, about how she would protest the situating of a coal terminal at the Oakland port. Samantha’s teacher had been so impressed by the writing that she passed it along to Norr, who works with kids in Oakland schools on a range of environmental issues.

Norr encouraged Samantha to apply for a Youth vs. Apocalypse fellowship. Even though she was technically too young for the program, her speaking and writing skills were such that Norr was willing to bend a little to bring her into a space where she could work on building her activist and organizing efforts with children her own age.

It was a wise call. In the year since, Samantha has confronted politicians such as Feinstein on global warming and, most recently, was part of a group invited to Harvard University to hold a workshop on youth organizing efforts. She has shot YouTube segments explaining the urgency of tackling climate change, and has become a leading local presence in preparations for today’s Climate Strike.

“They’re really owning their power,” Samantha’s teacher, Cory Jong, says of Warriors for Justice. “And using their voices and talking about how youth are powerful. Samantha is fierce and passionate and focused – and extremely talented. She’s determined to fight to make sure this is a shift in political discourse.”

Samantha’s mother, Eunice, agrees. “She’s more aware than I am,” says Eunice. “She’s enlightened me more. I believe she’s going to be a really positive leader; she’ll be up there. Hopefully a president – someone who makes a really good contribution to our country.”

Homeless Deaths Are on the Rise: L.A. County Officials Ask Why