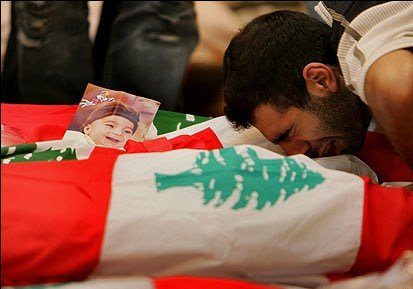 The baby was lifted in its flowing shroud
And carried through the red-lit streets,
Floating above the raised fists of men
In headcloths. The wrapped body a cloud,
Pall burden so light, it seemed weightless
Crowning the mad cortege. That shape

Once living in her arms—that shape
I mirrored, newborn at my breast. Shroud
So light it became an unsupportable weight,
As TIME fell open before me. I was the street
Going up in flames, but couldn’t see it, in the cloud
Of fire, her face.  What dark veil or wall of men

Hid her? TIME opened to the images of men.
I couldn’t see her; just her grief, unraveling shape,
White streaming from the breast.  That cloud
Of chants, bitter witness to the small shroud
Held high. She stood away from the fiery street—
The monument of her shadow, that weighted

Absence. Who shrugged the machine gun’s weight,
Wrenched from her the stopped heart. Which man
Explained their intent?  Did she cry out, over street
Sounds unheard, as they lifted the bloodied shape
From her embrace? Sirens, miles of shrouded
Windows, drone of a bomber above the clouds—

Hearts: Flaming paint on the fuselage. A Cloud
Of dust blurring the camera lens. Drifting weight
Of dark. Night shoulders the remains of day, shroud-
Lit moon.  The TIME opened, with men
Carrying the future, its lit fuse, that infant shape
Held up like a bomb spinning over bombed streets.

Nothing to say: mother, reader of TIME. Streets
I’d never walked, people and cries, a cloud
Of broken stares, hovering over her nursing shape,
Bent, clinging to the small lifeless weight.
I knew her milk still flowed, unsummoned. Men
With guns stood at her door, opening the shroud.

Carol Muske-Dukes is a professor at the University of Southern California and a former Poet Laureate of California. She is also a co-editor of two anthologies and an author of eight books of poetry, four novels and two essay collections. She is a regular critic for the New York Times Book Review and the Los Angeles Times Book Review.