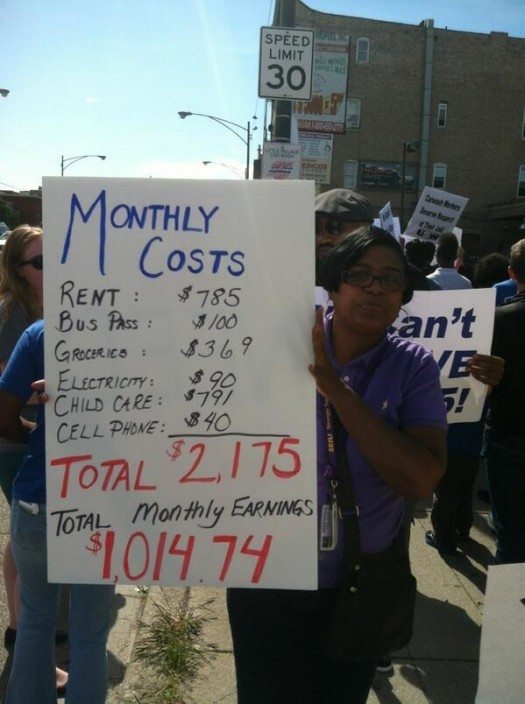 A Raise the Wage demonstration

Something is happening among our low-wage workers in America.

Is the ghost of the Occupy movement stirring?

Probably, but maybe more. In just one astonishing week recently, the Seattle Times—a newspaper not known for being pro-labor—featured worker protests either as the lead story or prominently in the paper:

Add to this list major coverage in the national press during the past three months of one-day walkouts by fast-food workers in New York, Chicago and several other major cities to protest abysmally low pay at McDonald’s, Taco Bell, Burger King and other chains.

And take note: These workers are no longer teenagers living at home. According to a recent study the median age of fast-food workers is now 29, and it’s safe to say that most of them must have a second job in order to survive. McDonald’s now-infamous “suggested worker budget” memo assumed exactly that.

As in other parts of the country, the fast-food worker protests here in Washington state are strongly supported by the Service Employees International Union. SEIU is also underwriting ongoing campaigns here to back the efforts of port drivers to become employees of the shipping companies instead of low-wage “contractors,” along with the drive of nearly 4,000 low-wage SeaTac airport contract workers to win union representation and a living wage. Likewise, the push for a $15-an-hour living wage in the City of SeaTac is supported by the union.

So what is happening?

It’s the low-wage workers themselves who are suddenly rattling their economic cages and trying to open the creaky doors with a cry for dignity, respect and a real living wage. They are being joined in their protests by faith leaders  who see this as a deeply moral issue, one to which our major faith traditions speak clearly. There are both Christian and Muslim leaders involved in each of these campaigns.

The rising protests harken back to the best moments in our nation’s history, from the progressive revolt against the robber barons of the late 19th century to the March on Washington for Jobs and Freedom led by Martin Luther King Jr. (which celebrates its 50th anniversary this month) to the Occupy protests beginning two years ago on Wall Street.

And who doesn’t know by now that workers on the lowest rung have lost huge ground in the last few decades? The bottom 20 percent of American workers by income—28 million workers—earn less than $9.89 an hour, their income falling five percent between 2006 and 2012, according to a study by the Economic Policy Institute. Meanwhile median pay just last year for chief executives of the nation’s top corporations jumped 16 percent, averaging $15.1 million—indicative of the continuing enrichment of the top one percent.

But even a $15-an-hour wage—if achieved by either fast-food workers or by the approval of the City of SeaTac’s initiative—would still be far below a monthly income sufficient to be able to live comfortably. According to the Family Wage Calculator of the Economic Policy Institute, a family of just one parent and one child would need roughly $4,300 a month in the Seattle-Tacoma area. A wage of $15 an hour (assuming a 40-hour work week) would translate to about $2,400 a month.

That is how far out of reach the goal of a truly livable wage—a wage which used to be well within reach, until about the 1980s—has become.

So it looks as though the protests of low-wage workers are picking up where the Occupy movement left off. Could this be the beginning of a new awakening for justice in America?

Our job as witnesses to this development is to be more than onlookers. We can raise our voices in solidarity with the workers. Better still, we can join them on the picket line or at rallies. And we can let our elected representatives know that the present situation is immoral and, in the long, run unsustainable for them, for us and for the country.

(Dick Gillett is an Episcopal priest, activist and author. Before moving to Seattle in 2007, he lived in Pasadena and was a board member of LAANE and of CLUE.)