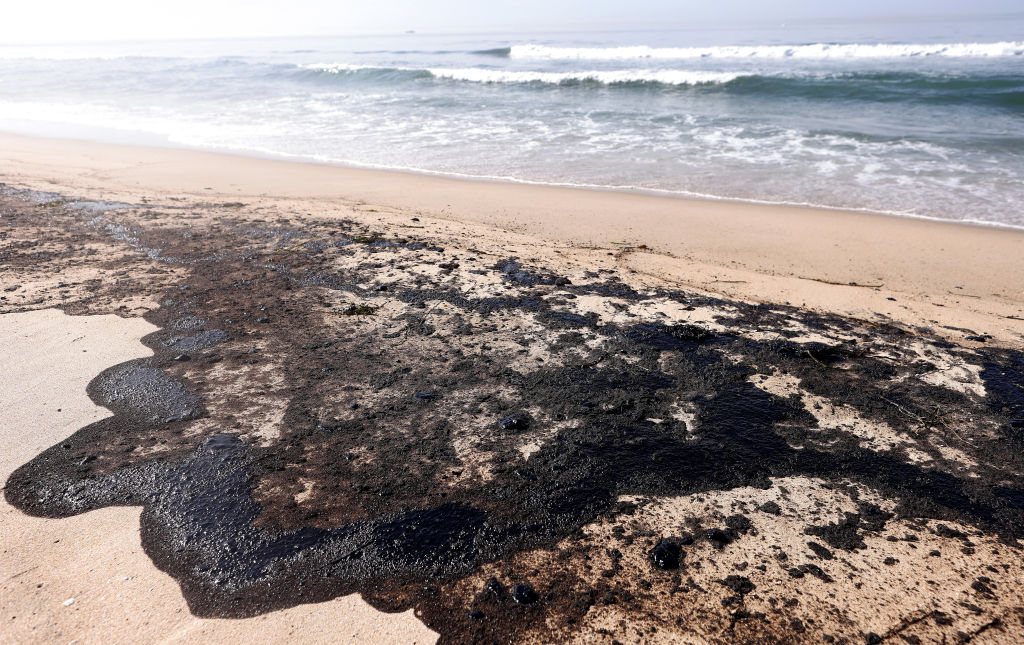 Oil is washed up on Huntington State Beach after an oil spill from an offshore pipeline. Photo: Mario Tama/Getty Images.

A little more than a year before an underwater pipeline leaked 144,480 gallons of crude oil, tarring Southern California beaches and killing fish and wildlife, the city of Long Beach signed a lease with Houston-based Amplify Energy that could extend the pipeline’s life through 2040, according to government records.

A subsidiary of Amplify, the oil company responsible for the leak, is paying the Port of Long Beach $84,449.83 a year for 37,430 square feet of property, according to a lease agreement signed on June 17, 2020. The Port’s fund is distinct from the city’s general fund. The lease was approved by the Port’s five commissioners, who have full decision-making authority on Port matters and are appointed by the city’s mayor and city council.

Since 1979, offshore oil drillers have leased an area now known as the Beta Pump Station from the city of Long Beach. The pump station is located at the Port of Long Beach’s southeast basin, where there are also active oil wells.

The pump station at the Port of Long Beach is an essential part of the infrastructure bringing oil produced from Amplify Energy’s offshore rigs to market.

The 17.5-mile pipeline that ruptured on Oct. 1 transports oil to the station from three offshore platform rigs that went into operation in the early 1980s. The platforms are about 9 miles southwest of Huntington Beach, in the Beta Field located in federal waters of the Catalina Channel.

The land at the Port of Long Beach was first leased by the city to Shell Oil Company, and is currently leased to Amplify Energy through subsidiary San Pedro Bay Pipeline oil company. The rigs are operated by another subsidiary, Beta Offshore.

Amplify Energy is the company responsible for the oil leak. It is part of a unified command — including the California Department of Fish and Wildlife and the United States Coast Guard — responding to the spill.

At a press conference hosted by the unified command on Monday, Amplify Energy CEO Martyn Willsher said the company hadn’t noticed the leak until Saturday. State records show the National Oceanic and Atmospheric Administration reported the presence of oil to EPA’s National Response Center early Saturday morning and that other reports had come in on Friday.

The U.S. Coast Guard’s criminal division is investigating whether the company failed to notice a drop in pressure that would have immediately alerted it to a leak, the Los Angeles Times reported.

The pump station is an essential part of the infrastructure bringing oil produced from Amplify Energy’s offshore rigs to market. After reaching the station, the oil is sent to various regional refineries via another pipeline owned by Crimson Pipeline, according to Kevin Tougas, the Oil Operations Bureau Manager for the city of Long Beach’s Energy Department.

Though Amplify’s offshore oil wells operate under a federal lease, the spill has renewed calls for Gov. Gavin Newsom to end California permits for offshore drilling.

The fact that the pipeline will be 60 years old by the end of the lease in 2040 is concerning, says Miyoko Sakashita, Oceans Director at the Center for Biological Diversity. It may also conflict with state, national and international climate goals to reduce greenhouse gas emissions via fossil fuel combustion.

“I think there’s a good argument here that there has been such an environmental disaster, coupled with our current climate emergency, that there are reasons of public safety and public trust to not continue with producing oil from these platforms,” Sakashita tells Capital & Main.

The renewed lease between Long Beach and Amplify Energy was part of an agreement to settle disagreements over the city’s new international bridge, which opened a year ago. During bridge construction, Amplify Energy said it didn’t have full access to the area covered by the lease and that some parts of the facility incurred minor damage.

Long Beach agreed to reimburse the company for some of those damages. In addition, because a portion of the bridge runs above high-pressure equipment at the Beta Pump Station, the city will reimburse Amplify up to $1.5 million for building protective steel and concrete structures between the equipment and the bridge.

“This is a red flag for the risks of future oil spills in California.”

Initial reporting indicates that the spill has already caused an ecological crisis and may keep affected beaches closed for months. Though Amplify Energy’s offshore oil wells operate under a federal lease, the spill has renewed calls among California environmentalists for Gov. Gavin Newsom to end state permits for offshore drilling.

Since the start of his term, his administration has issued 138 such permits, mostly for well reworks for older wells, according to Kyle Ferrar, Western Program Coordinator for the FracTracker Alliance.

“This is a red flag for the risks of future oil spills in California,” Ferrar said.

In a call to investors from August, Amplify Energy CEO Willsher said the company was overseeing development projects at the Beta Field that included two sidetracks of existing wells that were expected to produce hydrocarbons by the end of the year. Sidetracking, which includes horizontal drilling, can be a way of increasing production from poorly producing wells.

Amplify Energy’s oil and gas assets generated a total of $200.9 million in revenue in 2020, according to an SEC filing. This included revenues from active wells on company platforms in the Beta Field; the company also has operations in Oklahoma, Texas, Louisiana and the Rocky Mountain region. Fifteen percent of its proven oil reserves are off the coast of California.

The company has no registered lobbyists in California and is reportedly not part of the Western States Petroleum Association, the largest oil trade group in the state, but it has a robust lobbying presence in Washington, D.C.

Federal disclosures show Amplify Energy paid $610,000 to Capitol Hill Consulting Group for lobbying work from 2019 through the third quarter of 2020; the listed reason is “Working with [U.S. Department of the Interior] and Congress on specific royalty rates and decommissioning funds.”

Editor’s note: An earlier version of this story failed to clarify that lease agreements with the Port of Long Beach are paid to a fund separate from the general fund for the city of Long Beach.