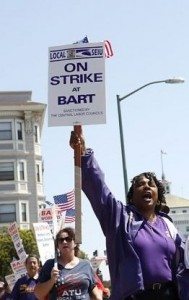 While a new labor contract is still being negotiated, SEIU 1021 and ATU 1555 have already won the 2013 BART strike. Prior to last week, both unions faced an untenable choice: Accept another round of concessions demanded by BART [Bay Area Rapid Transit] or risk alienating hundreds of thousands of BART riders by closing down the system. A successful strike would not be easy. It required rank and file solidarity, and the building of a strong community-labor coalition. It also meant withstanding an anti-union media blitz that framed the conflict as between a BART management that cared about riders and taxpayers, and a union workforce that only cared about “selfish” goals.

But as the dust from the strike clears, it is BART management that is under pressure to improve its offer. Both unions resume negotiations in a much stronger position than before the strike, and retain the option of striking again should BART still refuse to negotiate in good faith. Since unions will get a better contract than had they accepted BART’s last pre-work stoppage offer, labor has already won the 2013 strike.

On July 3, the day before the BART strike ended, the San Francisco Chronicle ran a story on BART General Manager Grace Crunican (“BART GM weighing needs of riders, workers”). The story portrayed Crunican not as the aggressive partisan for BART management that she is, but rather as a good-faith mediator caught between the needs of riders and workers. The article entirely ignored Crunican’s and BART management’s culpability for provoking a strike that caused great stress, hassle and financial costs for the union members involved and for hundreds of thousands of BART riders.

Also on July 3 the Chronicle’s C.W. Nevius lent his support for BART management in a column, “BART workers overplay their hand.” Nevius concluded that SEIU and ATU’s efforts to rally the public had failed because he saw a downtown street corner in which “the supporting horn honks and cheers are definitely lacking.” He also said “indications are that BART management is willing to offer some concessions.”

Well, I saw a lot of photos of public support for the strikers so Nevius’ assessment may have some methodological infirmities as a means of testing strike support. And if Nevius has indications that BART will offer workers a better contract because the unions went on strike, than that would show the tactic worked, and workers did not “overplay” their hand.

In fact, a more accurate column about the strike would be titled, “BART Management Overplayed Its Hand.”

If the unions were actually losing the strike, the Chronicle would not have needed to go all in with stories backing BART management as late as July 3. Instead, a real public backlash against the unions would have been already evident, as occurred in San Francisco when rank and filed MUNI workers turned down a contract that its leadership and the public backed.

As I wrote when the strike began, the daily newspapers have ignored BART management’s longtime disrespect for its workers. As a result, management’s responsibility for inciting the strike was ignored, despite some outlets having a team of reporters covering the story.

Reporters Give BART a Pass

Veteran reporter Carla Marinucci did not ask a single tough question of GM Crunican in her July 3 Chronicle story. Instead of asking why BART refused to come to the bargaining table in the days leading up to the strike, or why BART never addressed worker safety concerns, Marinucci wrote a puff piece designed to bolster public support for Crunican and BART’s hardline position.

The Chronicle even allowed Crunican to get away with identifying BART management as deeply concerned with the concerns of its riders. That sure was a laugher. Consider, for example, decades of unheeded rider requests that BART run its system all night or at least into the early morning, so those attending clubs can use public transit as in New York City and elsewhere. Or BART management’s ignoring the large public turnouts opposed to BART building an extension to the Oakland Airport rather than strengthen the East Bay’s existing system.

BART cared so much about its riders that it took over two decades of pleading before bicycles were allowed on BART at all hours. In fact, one is hard pressed to find an urban transit system less concerned with rider input than BART.

And that’s one reason why the public didn’t jump on BART’s side in its media campaign against labor.

The Power of Social Media

Another reason is social media. There is no way the unions could have withstood the media pressure against them had they not built and informed a community base through Twitter, Facebook and other social media. SEIU 1021 in particular constantly tweeted about breaking news, rallies, events and the course of negotiations, so those following these tweets–and many if not most 1021 members as well as community supporters likely were–were not discouraged or dissuaded by what they were reading in the Chronicle or hearing on the news.

In my new book, The Activist’s Handbook : Winning Social Change in the 21st Century, that is just coming out this month, I discuss how labor unions (and other progressive organizations) often fail to effectively use new media. As a result, strikes and other pressure campaigns frequently become overwhelmed by management-backed media stories that turn public sentiment against workers.

Labor unions across the nation should look at how social media were used in the BART strike and apply these lessons to their own struggles.

SEIU 1021 and ATU 1555 members remain committed to a fair contract, and the next month gives both unions a chance to increase attention on BART management’s failure to substantively improve its offer. I say this realizing that Antonette Bryant, ATU 1555 President, sought to get such a focus by tweeting weeks before the strike about BART’s refusal to negotiate in good faith, and its unwillingness to even come to the bargaining table.

The public paid a terrible price for this strike. But much of what I read [that was] critical of BART workers for not simply accepting management’s last offer would undermine the case for all unions. And those who keep comparing BART worker wages with those of nonunion workers (presumably wanting wages to go down as low as management desires) completely ignore management salaries, pensions and other lavish compensation packages that they could not obtain in the private sector.

Of course, BART management still got paid during the strike. If it did not, perhaps we would not see such bad faith bargaining in the future.

I predict the final contract will be better for SEIU and ATU workers than BART’s last pre-strike offer. And that will be the conclusive proof that workers won this strike.