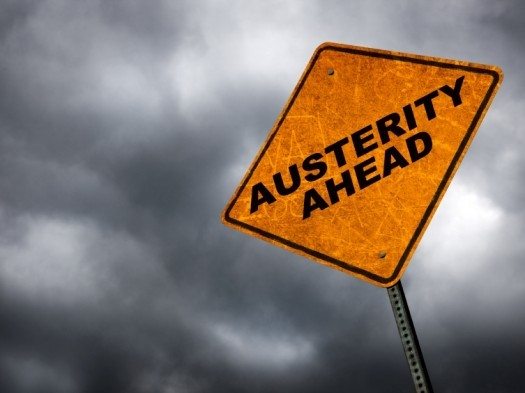 Yesterday Mother Jones’ Kevin Drum drew some disheartening conclusions from the budget deal worked out between Congressman Paul Ryan and Senator Patty Murray – the much-lauded compromise that is headed for passage, barring some last-minute Tea Party putsch in the House. Sure, Drum allowed, the budget’s entitlement cuts were almost too tiny to notice, and along the way some sequester reductions were restored. But that wasn’t the point.

“Two years ago,” Drum wrote, “Ryan’s budget was basically at the outer limit of mainstream conservative wish lists. Today it looks tame . . . Republicans have massively changed the spending conversation since 2010. Austerity has won.”

The fact remains that many in the political media are applauding the new budget as a triumph of realpolitik simply because it defuses the threat of a determined minority taking down the world economic order – a threat that has become the new baseline in budget negotiations. But is that the best we can do?

“The trouble with making ‘functional’ government the great aspiration of the American experiment – as so many pundits and politicians now do,” wrote The Nation’s John Nichols on the day Ryan-Murray was announced, “is that a smoothly operating Congress is not necessarily moral, humane or even economically smart.”

It’s too bad there isn’t some satellite imaging of how far the center has moved to the right in American political discourse over the past few years – and not just to “the right,” but away from the shared understanding of what makes a healthy democracy and toward a more Darwinian definition of society. The Supreme Court’s Citizens United decision certainly jerked the center toward the margins of political philosophy, as did, until recently, the casual acceptance that any presidential appointment could and should be blocked by filibuster. In any case, the fact remains that people and politicians have gotten used to one bad idea after another – and uneasily await the appearance of the next one.

It’s not only Congress, of course, that is acting against the interests of the great majority of Americans. Every time a McDonald’s predicts bankruptcy for itself when pushed to raise its minimum wage, or when a retail giant like Walmart gerrymanders the hours of its employees beneath a level they can survive on, we all move that much further from the common good. The acceptance of a permanent sequester, whose cuts may or may not be incrementally tweaked now and then, is one sure indicator of the center moving toward even more austerity – and at light speed.