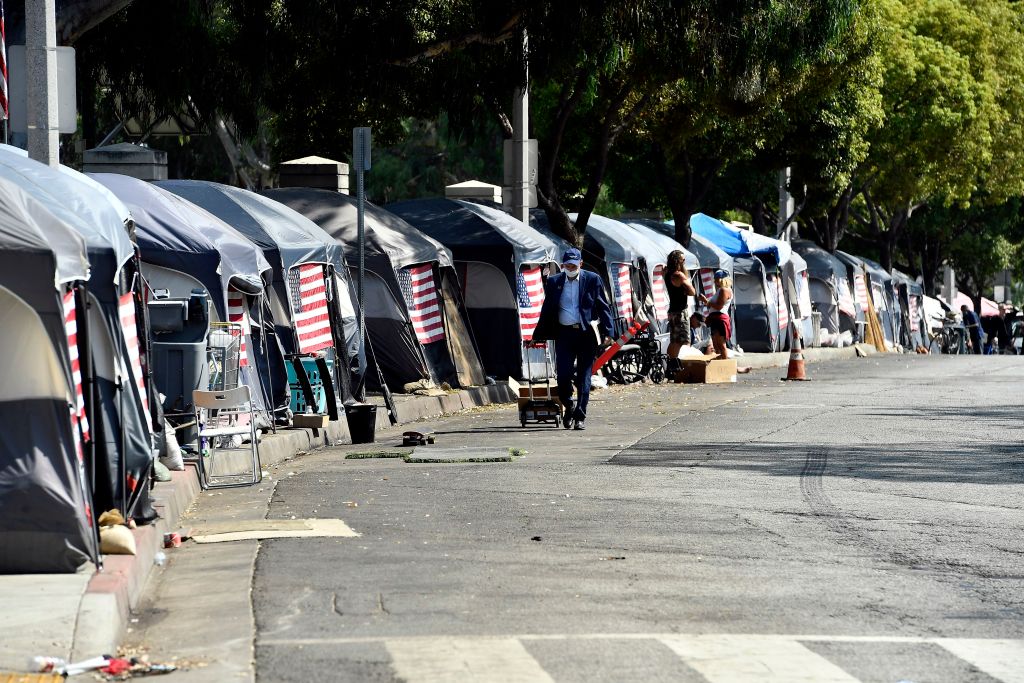 Long before the pandemic hit, California’s homeless issues were startlingly obvious. Even as state politicians and city leaders ignored the problems or placed them well down their lists of priorities, the unhoused population, particularly in larger cities, was growing apace. By 2019, California’s homeless numbers were estimated at more than 151,000 having risen by 16.4% from just one year earlier.

The fallout from COVID-19, with its job losses and crushing financial pressures, is expected to push those numbers dramatically higher when the federal Department of Housing and Urban Development releases its Annual Homeless Assessment Report to Congress, likely later this month. Already, though, 2020 will be recalled in part as a year in which homelessness became the object of significant attention in California, with initiatives operating on several tracks simultaneously.

L.A.’s lack of a coherent vision or policy suggests that once the money runs out, many folks are going to lose
their short-term housing situations.

It was the advent of the virus, and the threat of its spread, that intensified the attention and drove significant amounts of funding. So what happens now?

The answer to that question, as you might expect, is almost literally all over the map.

In San Francisco, city supervisors are pushing a measure to expand their shelter-in-place hotel program for the unhoused, although it’s not clear that they have the votes to protect against a mayoral veto. Down the peninsula, San Mateo County officials have been approving the outright purchase of hotels in an effort to create a more lasting solution.

Los Angeles, with its countywide estimate of more than 66,000 homeless, has tried a wide range of ideas, including an eye-opening effort to use “tiny home” villages to relocate COVID-vulnerable people into individual shelters (eye-opening because of the cost). But in L.A. as elsewhere, the lack of a coherent vision or policy suggests that, once the money runs out, lots of folks are going to lose their short-term housing situations and move back to the streets.

That grim prospect may be one reason why Sacramento Mayor Darrell Steinberg, a longtime advocate for the unhoused, is trying to keep the issue in front of decision-makers at the highest levels. Steinberg and others are going to need state and federal funding if they want to create stable solutions to the housing crisis in the state.

“This nation expanded access to health care through the Affordable Care Act. We need to think about housing and homelessness in the same way – as a national issue that local governments cannot address alone.”

Apart from funding, there could be a credible role for state and federal agencies to play. Local action will always matter, but in a recent Los Angeles Times op-ed, Steinberg, a Democrat whose institute consistently traces the linkage between mental health and homelessness, applauded two programs launched by Gov. Gavin Newsom during the pandemic. Each could prove useful in the years to come.

The first, Project Roomkey, used $162 million in state funds to lease thousands of hotel rooms as temporary shelter, with priority given to those homeless who were considered most at-risk for contracting COVID-19. An extension of that idea, Homekey, combines $550 million in federal relief funding with $50 million from the state to help counties and local public entities buy structures – hotels and apartments, most often – and convert them to “permanent supportive housing,” as Steinberg put it in the Times.

The impetus for both programs was the virus itself, as health officials worried that COVID-positive homeless people would become vectors of mass infection. But Steinberg and innovative leaders like San Francisco Supervisor Matt Haney, who has campaigned for more aggressive and lasting answers on his own city’s housing issues, also see these as potential vehicles of change over the longer haul. “The humanitarian disaster that we face is the fact that there are still thousands of people on the street during a pandemic, as it worsens, as it gets cold, without safe and adequate housing,” Haney said during a supervisor’s meeting last week. He introduced a measure that would prevent San Francisco from closing shelter-in-place hotels until the Federal Emergency Management Agency, which supplies most of the funding, officially terminates its Public Assistance Program.

It’s no surprise that at nearly every point, funding becomes a central question. Newsom’s Homekey program is operated substantially out of federal aid, and there’s simply no guarantee of continuation on that front. With Senate Majority Leader Mitch McConnell (R-Ky.) blocking Senate action on a new stimulus and relief bill unless he receives what he wants – GOP-backed legal immunity for businesses – another round of federal money is on hold.

That doesn’t only hurt Homekey, of course. No funding means no relief for individuals, many of whom are also facing the looming end of federal and state eviction protections. Back rent, often months’ worth, is going to be coming due for people who remain out of work and without renewed federal assistance. California’s homeless numbers almost certainly are about to swell again.

Steinberg sees the homeless issue in 2020 for what it was: a medical emergency that prompted action from state and local government entities that otherwise would likely not have been prodded into such movement. Thus, he says, there’s a need to “provide the urgency around homelessness that the pandemic provided.”

Among his ideas: legislation establishing a legal right for unsheltered people to come indoors, as well as a requirement at all levels of California government to reduce homelessness by a specified amount over a reasonable period of time.

“This nation expanded access to health care through the Affordable Care Act,” the Sacramento mayor wrote. “We need to think about housing and homelessness in the same way – as a national issue that local governments cannot address alone.”

That may be the only way that help, in the form of longer-lasting state and federal action, will be summoned. California’s homeless issue needs to be viewed in its true light, as an ongoing and debilitating public health crisis whose reach will extend even beyond the long grasp of the pandemic. What 2020 has done is place the problem in a more immediate and urgent mode. It should remain there.

Chasing the Vaccine: Convincing Californians to Roll Up Their Sleeves

How Will California Organize Its COVID Vaccine Rollout?